I've been a bit remiss recently in keeping the blog up to date; what with planning for the forthcoming company seminar later in January, and writing a new article on XML Publisher in my spare time, I've not really had much time to keep the blog up to date; also, compared to things such as going to Ottawa to work with Pythian, things are all a bit mundane at the moment what with Christmas being over and work starting up again.

I suppose what I should really write about is the process of putting my book together. It's actually quite interesting really; I signed the contract with Oracle Press just before Christmas, got my ISBN number (there's actually a placeholder on Amazon.com now, which makes it all sort of official), and now I'm working on the initial set of chapters before the publishers appoint the technical editor and so on. This is sort of the "probationary period", where they see if you can actually get yourself in gear and produce chapters in a reasonable time; at this point you're looked after by an acquisitions editor who guides you through the first phases, works with you on style and formatting and just generally makes sure things are "on track" before hiring technical editors and copy editors.

So far I've produced the introductory chapter, and the first one on Oracle Warehouse Builder, the one on configuration and data modelling. A couple of aspects have been a challenge; first of all, keeping to the alloted number of pages for each chapter, for which it's just as important you don't overshoot as undershoot as the book's projected sale price is budgeted on a certain number of pages - if you're going to go well over, it'll cost more to produce, and more often than not this is more down to you being too verbose rather than your initial estimate being wrong.

The other thing is settling on a style; I'm aiming more for the Tom Kyte "tell and show" approach rather than just rewriting the manual, but it's tricky at least initially to settle on a style that's appropriate for a technical book, but that isn't realy boring. The approach I've ended up taking is spending the first third of the chapter setting out, at a high level, what each component does, with the remaining two-thirds being a walk-through of how the product is used in a typical scenario. I've created a set of example data that I'll use consistently through the book, and whilst I won't go through every step to build the warehouse and report against it, I'll cover the key points and hopefully readers will be able to follow along. I don't know if this is acceptable as an approach (or whether there is "an acceptable approach") but I'll know soon, as it's with their editors at the moment to review before moving on to the next chapter.

Working out how much time to devote is also a challenge. My timetable says that I have a month to do each chapter, with ten more due over the next ten months. I'm currently spending at least two hours each day (in the evenings) on it, but I'm trying to discipline myself to spend at least half of the month working through examples, testing things out and so on rather then spending the whole time banging out words and only really covering what I knew beforehand. A major motivation for me was the chance to properly work through some things I'd only briefly covered before, and so for example in the ETL chapter I'm just about to work on, I'll be using the multi-configuration feature, version control, scheduling, data auditors, experts and Discoverer integration, features I've only looked at briefly before but that I want to cover properly in the book. In a way, I've got a tough audience to cover in what I'm doing; for most people, many of the products I'll be covering will be completely new to them (XML Publisher, BI EE, even OWB 10gR2) but there'll also be people, probably attracted by the blog, who'll be after "expert tips and tricks" as well. And all with a budget of about 30-60 pages per product in the suite.

Anyway, that's it for author musings. Moving on a bit, how cool is this? 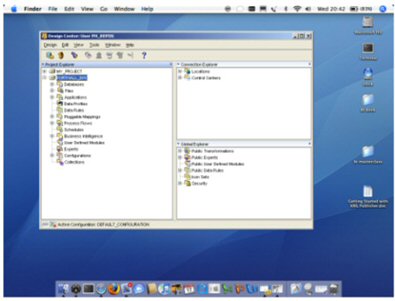 If you look. that's the Windows version of Oracle Warehouse Builder running in Apple OS X - or at least it looks like it; what it actually is is OWB running in a Windows virtual machine using Parallels and the new "Coherence" feature (screencast here) in the latest beta release. What this does is let you start up a virtual machine as normal, then switch to this new coherence mode, with all the windows applications then appearing in their own application windows on your OS X desktop. This means you can have OWB, AWM, Microsoft Word, even Internet Explorer and Outlook all running on your apple desktop as if they're OS X applications, you can drag and drop to them, and work with them just like any other applications.

The way it seems to work is to "lose" the virtual machine window container, plus the Windows desktop, and instead just show the windows applications directly on your apple desktop. At some point the effect breaks down - when you drag a Windows application across the screen, Parallels shows the Windows desktop under where the application originally sat until you stop dragging, and you have to move the taskbar to the top of the screen and put it on auto-hide to get it out of the way, otherwise it'll display just like any other windows application. But it's pretty cool though - when working with applications in place, they integrate completely in with your OS X applications and you can leave Outlook, or OWB or whatever just running in the corner and otherwise work entirely with your Mac applications. Not bad.

That's it for me for now though. As I said, I'm doing a free seminar on the 17th up at Oracle City Office (places still available, I understand) and then it's off for the BI Masterclass, organized by Oracle University, in Austria on the 22nd/23rd January, Slovenia on the 25th/26th and Sweden on the 30th/31st, and I think one's also being organized for Spain at the end of February. Until then, it'll be heads down and hopefully I won't get too many edits back from the Oracle Press team.