I've been doing a bit of research on the history of Oracle's BI tools, for the keynote I'm doing at the BIWA event next month, and in particular I've been taking a look back at the history of what is now Oracle BI Suite Enterprise Edition, previously known as Siebel Analytics. Here's what I've found so far, with the obvious proviso that I wasn't around at the time, didn't work for nQuire, Siebel or indeed Oracle, so if you know some more and want to chip in, feel free to leave a comment.

Most people are probably aware that BI Suite Enterprise Edition was originally known as Siebel Analytics, and was acquired by Oracle as part of the Siebel acquisition back at the tail end of 2005. In early 2006, Oracle held a press conference in New York and said that Oracle's future BI strategy will be based around the Siebel Analytics technology, with BI Suite Enterprise Edition initially being more or less Siebel Analytics 7.8, and with future releases including more and more Oracle technology - BI Suite Enterprise Edition 10.1.3.2, a.k.a the "Maui" release, included OC4J as the default application server, and Oracle BI Publisher as the replacement for Actuate. The latest release, 10.1.3.3, includes an interface between BI Publisher and Discoverer and new Microsoft Office Add-in, whilst the 10.1.3.3.1 release is slated to come with integration between BI Server and Essbase, the OLAP server that's part of Hyperion System 9.

It wasn't Siebel though that developed Siebel Analytics; that honour actually falls to a company called nQuire, who developed the technology that eventually became Siebel Analytics over a number of years at the end of the 1990's.

nQuire was set up by a number of ex-Platinum engineers and product managers, led by Larry Barbetta, who joined Platinum when their company, Prodea Software, was acquired in 1995, and left when Platinum itself was acquired by Computer Associates. Reflecting the interest at the time in search, portals and so on, their first product line-up, called nQuire Server Suite 1.0, was positioned as the "universal search engine for structured data" with the aim being to emulate companies such as Inktomi, who provided unstructured search facilities for web sites such as Yahoo and HotBot.

The initial release of nQuire Server Suite 1.0, even though it had an emphasis on search, had many of the features that we'd recognize from Oracle BI Suite Enterprise Edition. nQuire Server, the predecessor to what is now Oracle BI Server, provided a metadata layer over federated data sources, together with caching, calculations and so on, whilst adapters provided connectivity to Oracle, SQL Server, other relational databases and to XML documents. In a way, whilst the emphasis was on search (or at least the marketing emphasis), it was a ROLAP server that worked against federated data sources, with the key value-add being it's ability to integrate data sources in real-time and add calculations, caching and a business-focused metadata layer.

Whilst we'd recognize nQuire Server, in terms of querying and reporting, that came with version 2.0, with the 1.0 release providing a rudimentary browser interface and portal templates for use with, for example, Yahoo's portal solution. At the time, nQuire mentioned companies like Microstrategy, Documentum and Cohera as their competition, reflecting the interest at the time around searching and organizing structured and unstructured data, with nQuire's advantage being that they could put a single, unified metadata layer over all of an organization's structured data, and make it as easy to query as Yahoo or Ask Jeeves.

The screenshot below shows a copy of nQuire Portal Templates running, showing some data from the nQuire Server - I wonder if Answers was actually around at this version 1.0, and what we're seeing in the portal is early Answers content? 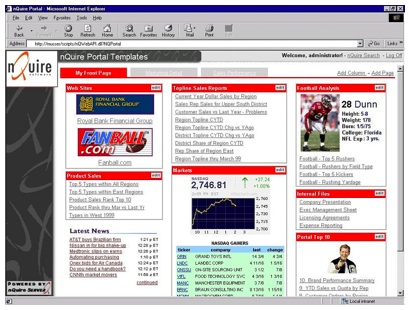 Version 2.0 of the nQuire Suite introduced nQuire Answers (the predecessor to Oracle Answers), with many of the features that we are now familiar with in Oracle Answers but with an additional emphasis on responding to English Language queries. Apparently in this initial release, you could pose questions in plain English such as "What were sales for the eastern region in the first quarter" and Answers would come back with a table of data - not something I've seen myself and I presume a feature that was eventually dropped when Siebel took the tool over. NQuire Suite 2.0, like version 1.0, ran exclusively on Windows NT and 2000 servers, was priced at $125k or £8k/month on subscription, and from the screenshot below, also came with the ability to create dashboards and portals to display the Answers requests, a feature that's clearly the predeccessor to what is now Oracle Interactive Dashboards.

Version 3.0 of nQuire Suite, released on February 2001, introduced nQuire Delivers (the predecessor to Oracle Delivers), providing alerts, iBots, report distribution, whilst version 3.0 of Answers now came with a voice interface, providing the ability to get answers and intelligence from the nQuire Server via a phone - again, presumably this was eventually dropped when Siebel took over. Finally, the nQuire Server added dynamic characteristic and fact-based segmentation (is this what became Siebel Marketing?), multi-request set-based analyic operations and operational metrics, with the server being available in two versions - data warehouse and real-time.

The screenshot below shows what I presume is nQuire Answers 3.0, displayed in what the top of the web page refers to as "Intelligence Portal", clearly the predecessor to Intelligence Dashboard which went on to be Oracle Interactive Dashboards. 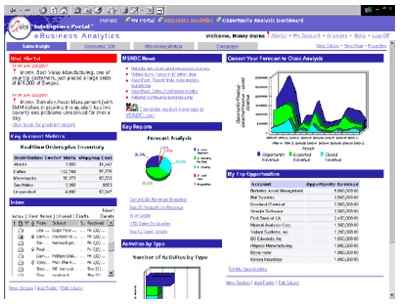 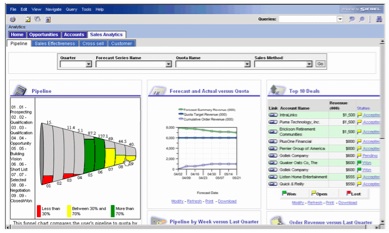 Interestingly, these packaged Siebel Analytics tools used a data warehouse platform provided by Informatica called Informatica Warehouse (hence Informatica being the packaged ETL tool with Siebel's business analytic applications), which Siebel then referred to as Siebel Analytics Customer Centric Enterprise Data Warehouse and then used alongside their own CRM data warehouse, called Siebel Relationship Management Warehouse, and which Siebel and Oracle have now eventually merged together to produce the single, unified packaged data warehouse that powers what is now referred to as Oracle BI Applications.

Phew! That's a bit of history there. As I said though, I wasn't around for any of this, so some of it might be wrong, or there might be more to add. Many of the original nQuire team, though not Larry Barbetta, are still working for Siebel and now Oracle, with some that I've met, such as Ed Suen, Kurt Wolff and Matt Elumba, there right at the start of nQuire and now driving Oracle's BI strategy. Anyway, if you know any more of the history of what is now Oracle BI EE, feel free to add a comment, and if there's something wrong, I'll add a correction.