I mentioned the other week that I got an invite to a roundtable session with Oracle's President, Charles Phillips, at the Lanesborough Hotel in London. The session itself was last Friday and so I thought I'd go along, there were I think around eight bloggers, analysts and journalists that came to the along and the session lasted around an hour.

If you're a regular reader of this blog you'll probably know that my interest is more around business intelligence than Web 2.0, enterprise applications and so on, but I thought I'd come along as I've got a tangental interest in these areas and of course I thought it'd be interesting to meet Charles Phillips in person. Uncharacteristically for me I ended up listening for most of the session rather than asking questions, I did get in a question around how Web 2.0 might influence business intelligence but for the most part, most of the discussion was around collaborative technologies, how Oracle plan to embed these in their applications to the point where they're planning to put together "Enterprise 2.0" teams within each Oracle's seven regions. 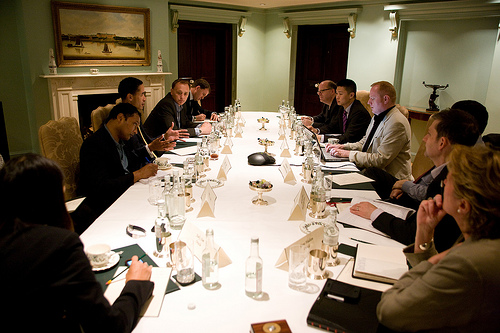 It was interesting to hear Charles' take on why Oracle feels the innovations in such areas as instant messaging, social networks, collaborative working and so on can apply to the heavy-duty enterprise applications that Oracle sells. The obvious counter to suggestions that Web 2.0 can apply to ERP applications is that you don't want your financials application to look like Facebook; the point Phillips made though was that the ideas behind collaborative apps - social networks that form themselves, validation of expertise through peer endorsement, sharing of ideas, ability to engage with micro-markets - are all ones that can add value to the enterprise. If you divide what Web 2.0 ideas can bring to enterprises into two areas - internal and external - you can certainly imagine technologies such as Twitter, IM, blogs, wikis and so on being used to maintain communication with customers, and similar technologies being used within the organization to foster communication and idea sharing. Phillips talked about how these ideas are being used within Oracle; apparently developers are being encouraged to "tag" themselves to say what skills they have, what projects they've worked on, with their peers then voting on each others skills to validate claims of expertise. There was also talk on what Oracle plan to do with these technologies later down the line, perhaps eventually using technologies such as Web Center, Stellent and so on to establish a beachhead in the collaborative space, then extend this back to more legacy technologies such as email to take on Microsoft and IBM in the Exchange/Lotus Notes space.

Anyway, even though most of the discussion was outside my particular area of expertise it was a useful hour or so. Charles Phillips came across well; he's obviously a very smart guy and he gave pretty straightforward answers to the questions - I've been in similar sessions in the past where it's been like the Oracle person was answering from a press release. Kudos to Oracle and Charles Phillips for doing this; the questions were by no means easy the audience was a pretty smart bunch as well. Throughout the session there was a photographer taking photos, I worked out after a while that they were all of Charles Phillips and one thing that made me smile when I accessed the photos online was how well they came out when you use a professional photographer - the one below is a typical one and compares well the usual ones we try and take of each other when doing talks at conferences, where I usually end up looking very shifty or that I've got something wrong with me (though nothing will ever beat this one). 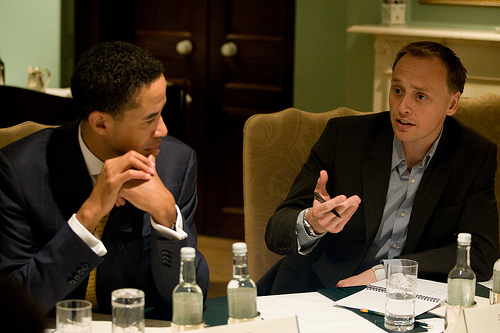 Incidentally, if you followed the interview with Phil Bates that I ran in two parts on this blog in April, I'm just waiting for Phil to come back from his holiday before I get him to answer your questions. I'm also going to run a similar interview with Jean-Pierre Dijcks, the Product Manager for Oracle Warehouse Builder, so if you've got any questions on OWB product direction add them to the comments or drop me a line and I'll put them to him.

Dan Vlamis sent me a link through to a recent article by Mark Whitehorn on "Data Bashups", an idea…

A few days ago, Farooq posted some comments on an old post of mine. The final comment in our…