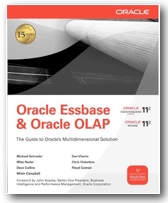 I've been talking with Dan Vlamis about a new book that he, Chris Claterbos and some of the Essbase team from Oracle have been putting together on Oracle OLAP and Oracle Essbase. Oracle Press were kind enough to send over a review copy the other week, and so I've been taking a look at it over the past few days in advance of it arriving in the shops.

"Oracle Essbase & Oracle OLAP: The Guide to Oracle's Multidimensional Solution (Osborne Oracle Press Series)" is a joint effort written by Dan Vlamis and Chris Claterbos, who covered the Oracle OLAP side, and Mike Nader, Michael Schrader, Dave Collins, Floyd Conrad and Mitch Campbell covering the Essbase angle. What the book tries to do is to cover OLAP on the Oracle platform in general, initially going through some general OLAP concepts, then going through the two product offers and how they complement each other, and then diving deeper into the architecture, cube creation process and maintenance of each of the two OLAP platforms.

I've read a few Essbase books recently, most notably Edward Roske and Tracey McMullen's "Look Smarter Than You Are With Essbase 11", and there's a fair bit of difference between how Essbase is handled in this book and the one by Edward and Tracey. The "Look Smarter" book is a bit more of a denser read, starts off with manual building of Essbase cubes and spends a lot of time on the internals, storage types, creation of rules files and so on. This book takes a bit more of a "product managers" approach to Essbase at the start, spending quite a bit of time positioning it vis a vis Oracle OLAP and going through some deployment scenarios and case studies. The "hands-on" part starts off by covering Essbase Studio first (the "Look Smarter" book only really covers this in passing at the end) which makes it probably a better book for beginners new to Essbase. Coverage of Essbase development is pretty comprehensive, and there's chapters on usage with OBIEE (though more the front-end, not the importation and modeling of cubes in the semantic model) and some content on Planning, HFM and so on. This is a great intro to Essbase, and particularly useful if you're considering the technology and not quite sure how it fits in with the rest of Oracle's Fusion Middleware and BI/DW stack.

I was particularly keen to read the Oracle OLAP chapters though, as even thought I've worked with the product for many years, there are many Express-era concepts such as sparsity, dimension ordering, OLAP DML and so on that I could benefit from some of Dan and Chris' thoughts on. These concepts are covered pretty well in chapter 3 of the book, with updates for 11g, though some of the newer concepts in 11g such as cube scripts, the new expression syntax, SQL access and partitioning could do with a bit more expansion - I guess this is the downside of sharing a book with Essbase, but it does mean there's plenty of scope for an advanced, Oracle OLAP specific follow-on book if Dan and Chris have the time. One thing that is particularly useful though is coverage of the cube organized materialized view feature new to 11g - although there was a flurry of publicity around this around the launch of 11g, I haven't seen a huge amount of uptake and the coverage and explanation of this should hopefully bring this to more people's attention.

As usual for Oracle Press, the book is well edited and laid out and will be a great resource for customers new to OLAP who are wondering which of Oracle's OLAP solutions to implement. From the Oracle OLAP side, you couldn't get two more experienced developers and consultants to write a book on it, and I certainly picked up lots of useful tips and clarifications whilst working on the review. From the Essbase side, there's some useful positioning stuff and a good introduction to cube building using Essbase Studio, and I'd say if you bought this book plus Edward and Tracey's one as well, you'd have Essbase development pretty well covered off. Dan tells me that the book should be ready in time for Oracle Open World in two weeks time, so if you're in SF and can get a chance to pop into the bookstore in Moscone West, you should be able to pick up a copy "hot off the presses".

As the headline says, it's less than 10 weeks to the main UKOUG conference, as ever held at the…