Oracle released details over the weekend of a news conference they are running on September 15th 2009, to announce a new OLTP-focused database machine this time based on Sun hardware. 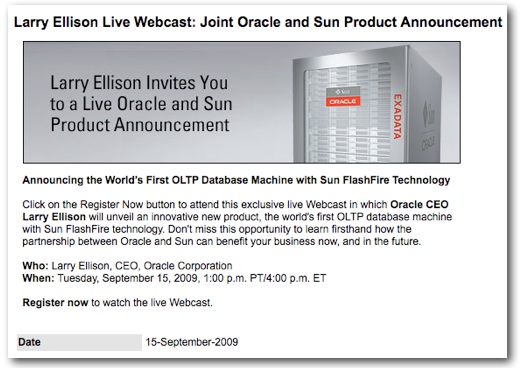 I'm surprised that this wasn't held over until Open World, but the twitter- and blogo-sphere has been alive over the past few weeks about a possible "Exadata 2", so the product itself isn't unexpected. So, speculating here, what's this product likely to contain?

Well like the HP Oracle Database Machine, presumably it's going to contain a balanced set of database servers, storage units and switches but based around Sun, rather than HP hardware. My instinct says that it'll be x64 rather than Sparc processors powering the servers (if only to harness the commodity hardware cost benefits) and Exadata Storage Servers will presumably be used for the storage hardware, though whether these are HP units or new Sun units that also use the same branding (and presumably, the same SmartScan technology) we'll have to wait and see.

The interesting bits bit for me is the OLTP focus, and the "FlashFire" Sun technology. Doing a quick Google search brings up nothing on "FlashFire" which means that it must be something new for Sun as well, but taking the requirements of OLTP (lots of concurrent access, lots of small random retrievals and writes of data, compared to small amounts of full table scans), it's probable that this is a flash disk (RAM) storage technology.

Exadata Storage Server doesn't use flash memory at the moment, something that was dismissed as being irrelevant at the time by Oracle but that may now be more relevant for OLTP, as opposed to DSS, workloads, and something that Oracle may be forced in to by the fact that the speed of the new Nehalem chips coming along from Intel would otherwise make their balanced architecture unbalanced (in favour of CPUs).

Still, we'll have to wait and see, and of course afterwards wait further to see if the more traditional, HP-based data warehousing Database Machine gets an update at Open World a few weeks later. More news later in the week after the announcement is made.

Mark and Venkat have already been blogging about OWB 11g Release 2, but that was not the only new…

It's just a few weeks now until Oracle Open World in San Francisco, and Rittman Mead will be attending…