I'm off to Copenhagen this evening to deliver a keynote at the Danish IT Society's Business Intelligence conference, and as the event is not Oracle-specific I thought I'd take a look at the BI and data warehousing market in general. The theme of the keynote is around the heightened demand for BI in this particular recession, and I wanted to take the opportunity to take a closer look at three vendors who have been particularly innovative in terms of "time to market" and "user-centricity". The first product I'll be demoing is the Oracle BI Applications, the second is Qlikview, and the last is the joint offering from Google and Panorama that I called out on this blog at the start of 2009.

Google have over the last few years been steadily developing applications that run in the cloud and that compete with the likes of Microsoft Office and Microsoft Exchange. Google Docs is a nice environment for creating and then collaborating on shared spreadsheets, documents and presentations and in fact we use this tool extensively within Rittman Mead for collaborating across all of the countries we operate in. Google Spreadsheets isn't as fully-featured as Microsoft Excel, but it covers the vast majority of features most people want to use, and you can collaboratively edit documents and share them without any hosted server-side infrastructure.

Panorama Software have had an interesting journey over the past ten years or so, originally developing the OLAP technology that became Microsoft Analysis Services, and the front-end tool to accompany it that they then marketed as Panorama Novaview. All of this led to a fairly close association with Microsoft until Microsoft then went and bought ProClarity (prior to this they had a policy of not favouring any particular front-end tool or vendor), which then led to Panorama linking up with Google and offering a cloud-based version of their new OLAP engine, plus an OLAP query components that could be plugged into a Google spreadsheet as a "widget". All of this is free, which means that in theory, you can start performing OLAP analysis for nothing using just Google Spreadsheets and the pivot table widget from Panorama. So how does it work in practice, and are we going to see OBIEE and Essbase customers moving their data into the cloud and using this ultra-low cost alternative?

The first step is to either create a new Google spreadsheet, or upload one from Excel. This is in fact where you hit the first issue, as Google spreadsheets can only contain a maximum of 200,000 cells, which sounds a lot but if you consider that your data might contain 10 columns (6 of dimension values, four of measures for example) then you are limited to a maximum of 50,000 rows, which isn't far off the maximum for Excel but it's still a bit limiting when it comes to real-world datasets. There is a way around this - more on this later on - but assuming you can work around this, you create your spreadsheet so that it looks like this: 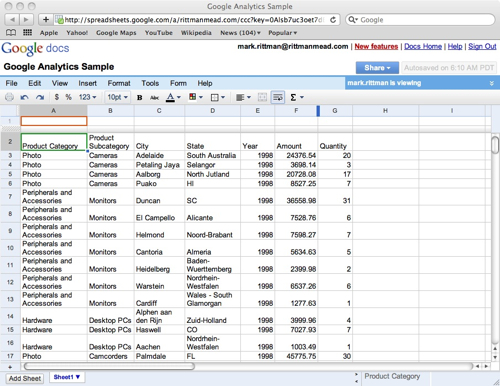 You might recognise the data as the Oracle Sales History (SH) data set, which I exported to CSV and then uploaded to Google Spreadsheets via an Excel workbook. Once you've got your data uploaded you can then start the Panorama gadget. To do this, select Insert > Gadget from the Google Spreadsheets menu, like this: 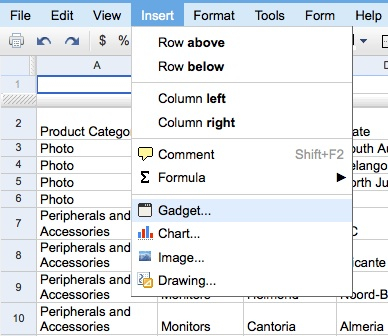 Then you select the Analytics for Google Spreadsheets gadget from the list of table views. This then adds the gadget to the spreadsheet you've just set up. At this point, you can set the data range for the pivot table input, where the data is coming from (initially, just this spreadsheet), and whether the first rows in the spreadsheet contain the data item column names. 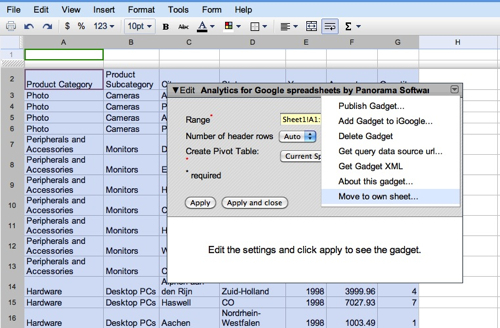 You can move the pivot table to it's own spreadsheet page at this stage, which I do, and then I get a whole worksheet to perform my analysis. At this point, you can select the data items for the X any Y axis, and I choose to put product category and subcategory on the Y, and state on the X as at this point, the gadget thinks that "Year" is in fact a measure. 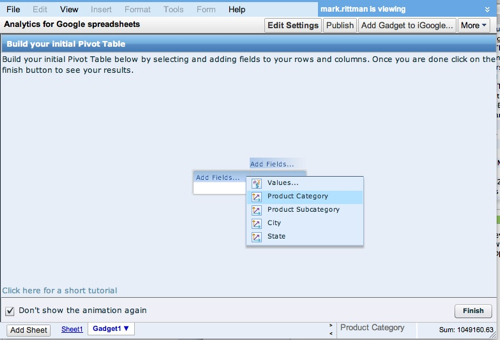 Selecting Amount Sold as my measure, I create my first pivot table, which, for something that's free, is pretty impressive. 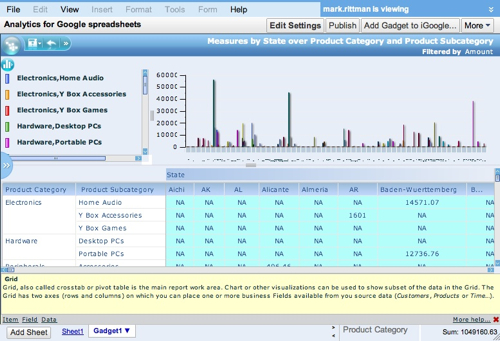 Once data is in, you can apply filters to dimension members, like this: 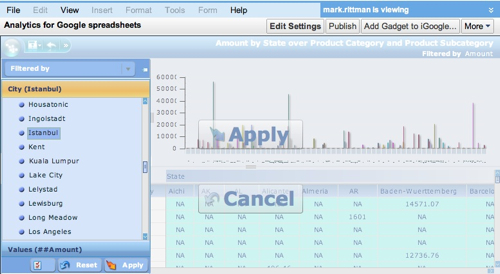 You can also change the graph type, move it around, sort and rank the results and apply different aggregations to the data. 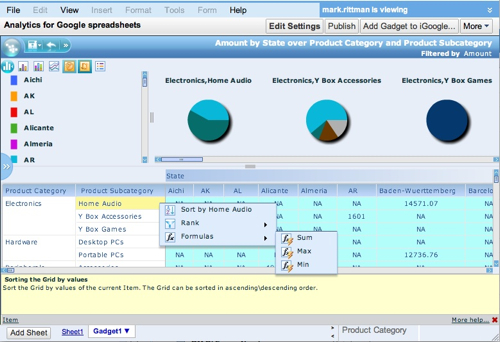 Interestingly, and going back to the original restriction on the size of the spreadsheet dataset, you can also use a tool called CubeSlice to take a subset of a Microsoft Analysis Services cube, copy it to your local filesystem and then upload it to the Google cloud, where you can analyze it using the Panorama gadget. This presumably is going to get you around the row limit restriction, and I guess confirms that converts from Microsoft Analysis Services and Excel are probably one of the key markets for this product.

So, is it game over for Oracle, is this to OBIEE what GMail was to Microsoft Exchange? Realistically, although it demos well, it's a fairly limited product, suffers a bit from the latency of the Java/Flash UI and feels a little bit "flakey". Although on the surface it seems comparable to the pivot table view in OBIEE, when you think about what users want to do with pivot tables once they've set them up - create page and section items, set up drill-through to detail, set up navigation, create custom calculations, measures and aggregates - it's quite a limited solution, but if the alternative isn't really OBIEE, it's "no BI", then this is certainly quite an attractive proposition. In addition, if you've got data in a local Microsoft Analysis Services cube and you're considering whether to use Sharepoint plus Excel Services, but think that option is a bit heavyweight and expensive, this could be an interesting alternative particularly if you're looking to share or collaborate on your analysis. 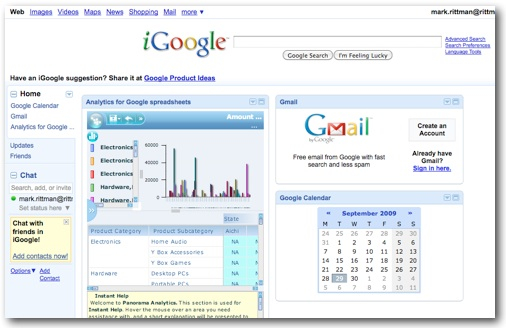 Now this is quite a neat way of sharing your analysis or making it available in a rudimentary dashboard or portal, although as usual "the devil is in the detail". I couldn't see a way of adding this to my Google Apps dashboard (which I'd need to do to be able to use my Google Apps email, calendar and so on) and you are quite restricted on the layout, I couldn't get the report above to spread over the whole page, or run in two columns, for example. But if you've got some data in Google Spreadsheets, or want to start sharing some Microsoft Analysis Services data but don't want to stump up for Sharepoint, it's an interesting alternative.

In the past i have covered a wide range of integration possibilities of Oracle Essbase with  relational sources. This…

The news hit the wires last night that Oracle were buying (certain assets of) Hyperroll, a technology company out…