The vast majority of customers I come across that use OBIEE run the platform on Linux or Unix. For those that run it on Windows though, what tools do you have to monitor the performance of the platform? One of our customers is in just this situation as they are running Oracle BI Standard Edition One, which is limited to Windows as a host platform, and so a tool we'd use in this situation is "Perfmon".

Perfmon (short for Performance Monitor) is a utility that's shipped on Windows since the days of NT4.0 and is commonly used by Windows sysadmins to keep an eye on the characteristics of their system. You can use it to monitor hundreds of different metrics, such as processor usage, memory usage and disk usage, and you can connect it to the OBIEE binaries to find out more about your BI system.

I'm running Oracle BI EE on a Windows 2003 server, and to start taking a look at this feature I start Perfmon from the start menu (Start > Settings > Control Panel > Administrative Tools > Performance), or I can just type in perfmon from the Windows command line. The utility initially comes up like this: 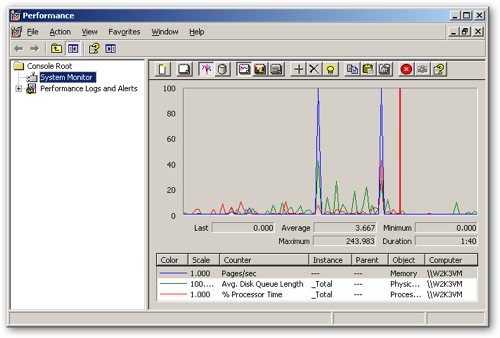 To start with, I"m interested in some more general indicators of the load on my system. Do add more metrics, I click on the "+" button in the middle of the application toolbar to add a new counter. This brings up a dialog that lets me initially select a Performance Object, which is typically a part of an application or a general Windows area such as as System. 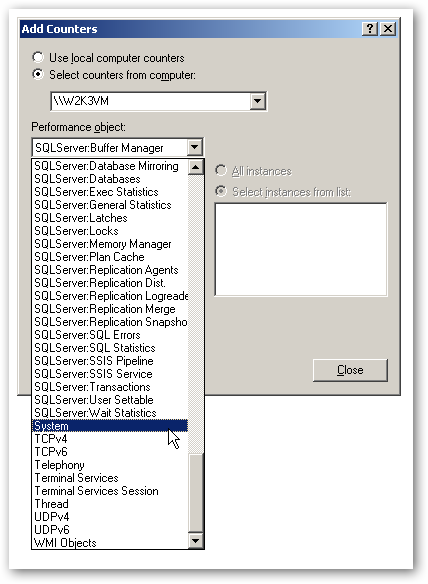 I select System and then select the Processor Queue Length counter, which represents the number of threads queued and waiting for time on the CPU. If the number is more than 10 times the number of CPUs (or virtual CPUs if using VMWare) then your system is running under a normal load. 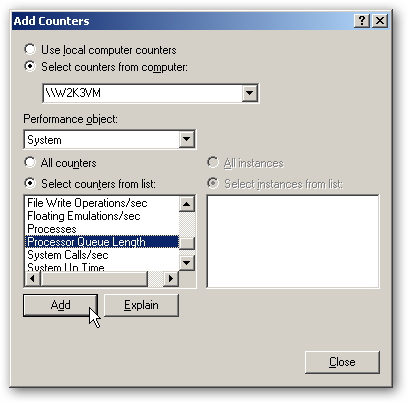 I then press Add to add the counter to the Perfmon monitor, and check the output. Perfmon has scaled up the counter by ten to fit in with the others, and I can see that apart from a brief peak, this metric is looking acceptable. 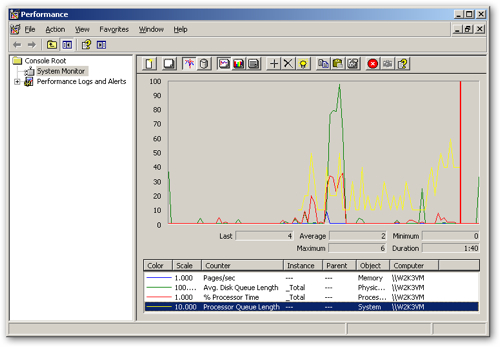 Other metrics I might be interested in include: So I now have Perfmon monitoring some useful overall system metrics to let me know if the system is overloaded. But what about OBIEE specifically?

If you go back to the point where you add new counters, you'll notice that on a system with OBIEE installed, there are a bunch of performance objects specific to the server components of OBIEE. 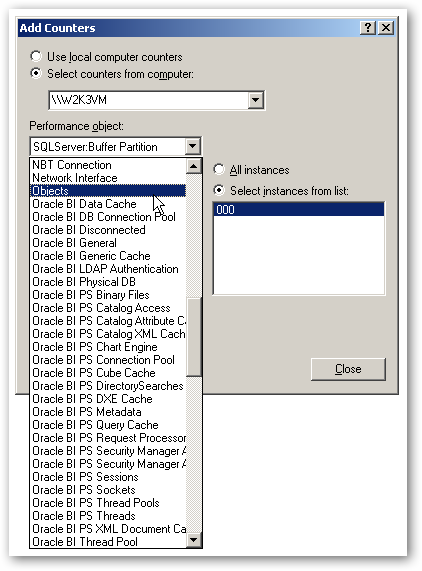 These are the counters that tools such as the BI Management Pack uses to monitor OBIEE performance, and you can also access them from a browser using the URL http://<machine_name>:<port>/analytics/saw.dll?perfmon 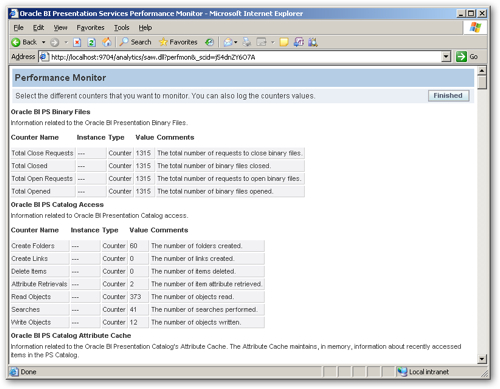 This screen gives you all the counters in one place though, so there's probably a bit too much data here to monitor on an ongoing basis. Plugging these counters into Perfmon gives you the ability to graph and monitor them individually, and you can also plug them into the underlying Windows alerting subsystem to let you know if something has gone wrong.

So let's take a look at some OBIEE metrics. To keep things simple, I delete the existing counters from the Perfmon window and also switch to the Histogram view, so that I can see the metrics as a vertical bar chart. I then add the following two BI Server metrics to the window:

All of which give me an idea of the general load on the system. I could add more detailed counters on cache usage and so on, but for now my Perfmon output looks like this: 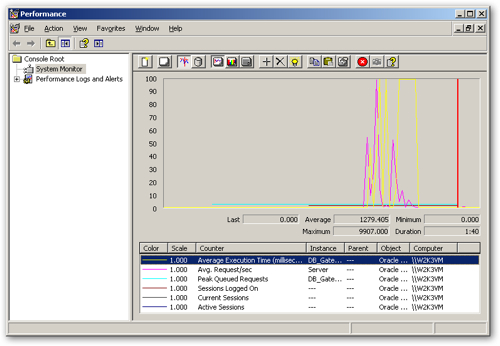 One other neat feature of Perfmon is alerts. By right-clickin on the Performance Logs and Alerts > Alerts section within the Perfmon tree view, I can define a new Windows alert against these metrics. 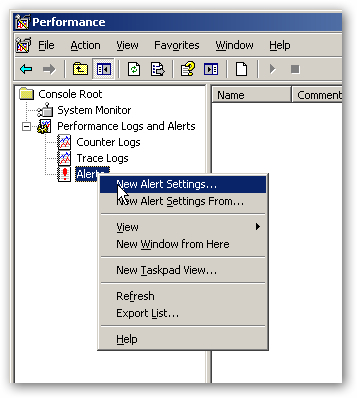 I pick the Oracle BI PS Sessions > Maximum Sessions counter and set the alert to tell me if more than one session is running. 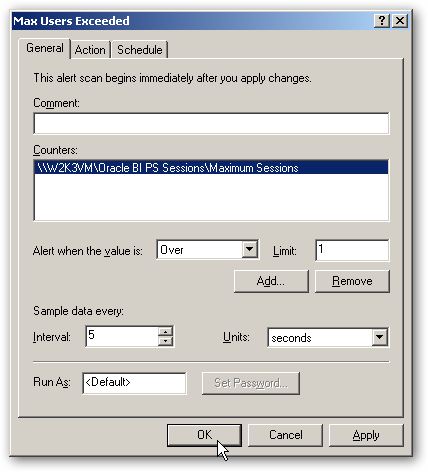 This process then runs automatically, and logs alerts in the Windows alert log, so that you can see them in the Event Viewer under Control Panel > Administration Tools. In this case, as I've set the alert threshold so low, running a couple of more browser sessions triggers the alert. 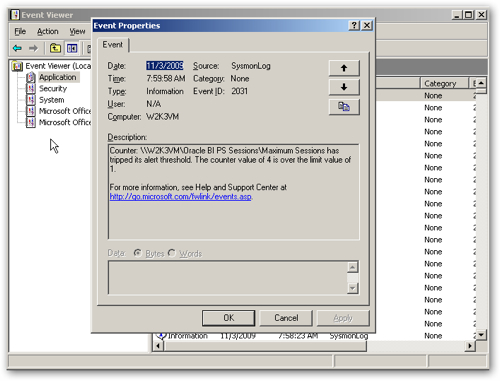 You can also do something similar if you're running Essbase on Windows, or any of the other EPM components (Planning, Financial Reporting etc), though the counters aren't quite so detailed and are more generic process counters such as amount of memory used, % of processor time, virtual bytes and so on. For something "free" though, Perfmon is neat utility and Oracle/Siebel have nicely instrumented the OBIEE server processes making it relatively easy to get a handle on the performance of your BI Foundation platform.

In the last blog entry, i had shown a very simple work around to use direct database requests in…