Along with In-Memory Parallel Execution, another new feature that came along with release 11gR2 of the Oracle Database (or more correctly, version 2 of Exadata Storage Server) is Hybrid Columnar Compression. You'll need Exadata to use this (though at one point is was part of the standard 11gR2 database beta, without an Exadata dependency), but if you've got either the HP or Sun versions of the Exadata hardware, are running the v2 Exadata software and your database is running version 11gR2, then you can give this is a spin.

If you've been following the wider analytic database market over the past few years (Curt Monash's DBMS2 website is a good place to start), you'll probably be aware of products such as Sybase IQ and Vertica Analytic Database that store data in columns as opposed to rows. Interestingly, a lot of former ex-Oracle data warehousing server tech people ended up at Vertica, including Lilian Hobbs (author of "Oracle 10g Database Data Warehousing") , and over the past couple of years vendors such as these have achieved some success in the marketplace with their column store approach. In fact I ran an interview with Mike Stonebraker, CTO of Vertica, on this blog a few months ago (prior to the release of Exadata 2) where he set out the case for column-based storage and the "shared nothing" architecture that his product uses.

Fast forward to the weeks before Open World, and Oracle announce the Sun Database Machine and version 2 of the Exadata Storage software that comes with it. Apart from Flash Cache (primarily aimed at OLTP environments) the major innovation from my perspective, and a bit of a volte-face from Oracle, was this halfway-house approach to column-based storage which they termed "Hybrid Columnar Compression". The idea behind this is as follows:

Arup Nanda has written a good article for Oracle Magazine that goes through the technology and explains how rows relate to compression units, and compression units relate to blocks. Basically, whereas blocks store data in rows, each column next to each other in the row (more or less, row chaining can affect this), so that blocks conceptually look like this:

The compression units used by Hybrid Columnar Compression typically span several data blocks and inside, organize data into sets of columns, with each compression unit holding the data for the columns for several rows. 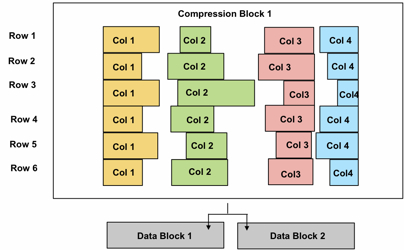 These compression blocks offer two potential advantages to data warehousing customers; firstly they compress better because columns are more likely to contain repeating values (genders, cities, account flags etc) than rows (where individual columns are often unrelated, at least in terms of the values they contain), and because you therefore pack more data in per block, it takes less blocks, and less disk I/O, to get hold of the data you are interested in - the same idea that makes regular compression attractive to DW users. Arup's article goes into the syntax and the concepts in more detail, if you're interested, and also has some test cases to show the kinds of benefits you can expect (though of course you'll need Exadata 2 to try them out). Also, beware of the locking issues that compression units can bring - as each unit contains several rows of data, a lock on one row in the compression unit will lock the other rows as well, which makes the feature not really suitable for OLTP environments.

For me though, the interesting test of this will be to see how hybrid columnar compression compares to the "pure-columnar" approach used by vendors such as Vertica. I would imagine Vertica would argue that whilst its great that these compression units store their data organized by column, their approach would be superior for DSS customers as their equivalent of blocks stores just the data for individual columns, not all the columns for a set of rows. As such, their approach may well require even less disk I/O as you won't be pulling back all the (compressed) columns that are stored with the columns you require (as you do with Oracle's compression units), though I'm not close enough to either of the technologies to know if this is the case.

I doubt we'll ever really see an apples-to-apples benchmark test of both technologies side-by-side (if only because most vendors' license terms prohibit publishing benchmarks), but for Oracle customers I guess this is by-the-by; even if columnar compression isn't as DSS-efficient as pure column-based storage, it's still a huge boost to queries and it keeps it all in the familiar, manageable Oracle environment, a benefit not to be dismissed if you have thousands of databases to manage and you're aiming for vendor and hardware consolidation. For customers already sold on Exadata and SmartScan and for whom this is if anything a bit of a bonus, it'll be interesting to try this out on your own data and see how much benefit it brings.