If you've been following this blog and read the posting last year on QlikView, you'd have seen some of the possibilities around the idea of in-memory execution of queries. As desktop PCs, laptops and servers now routinely come with 4GB+ of RAM (going up to 64GB+ for servers) much of what used to have to be done on disk can now be done in memory, eliminating much of the bottleneck around disk I/O. If you followed the announcements around Oracle Database 11g back in the summer of 2009, you might also have noticed something similar sounding for the database, where parallel queries running in one or more database instances could use the RAM available to them to analyze data in memory, in a feature that was called "In-Memory Parallel Query". So what does this feature do, and how does it work?

First off, as you typically use it with RAC (though it does work with single nodes, thanks Greg for the clarification) and requires 11gR2, it's not the easiest thing to set up in a test environment, so I'm going off white papers and presentations for the time being. Conceptually, it's a different approach to vendors like QlikView and Microsoft (with PowerPivot) who are using the local memory on users' PC, with Oracle instead using the aggregated memory of nodes in a RAC cluster. As such it's something an administrator would set up rather than users, though once its set up it should just take effect in the background, making queries run faster.

As the name suggests, In-Memory Parallel Query is based of the parallel execution feature in the database that divides up the task of scanning a large table into several processes that each scan a part of the table. It's typically used in conjunction with partitioning and servers with lots of CPUs, and prior to 11gR2, these parallel server processes (co-ordinated by the query co-ordinator, linked to your login session) would in most cases read the required data (broken into "granules") direct from disk bypassing the buffer cache using direct path I/O, so as not to age everything out with what would presumably be a large amount of incoming data. Only objects smaller than 2% of the size of the buffer cache for an individual database instance would get read into the buffer cache, as illustrated in this diagram from Maria Colgan & Thierry Cruanes's Open World Presentation, "Extreme Performance with Oracle Database 11g and In-Memory Parallel Execution", which shows traditional PQ working with a small partitioned table and a four-node RAC cluster. Note how individual partitions (objects) are going into each node's buffer cache. 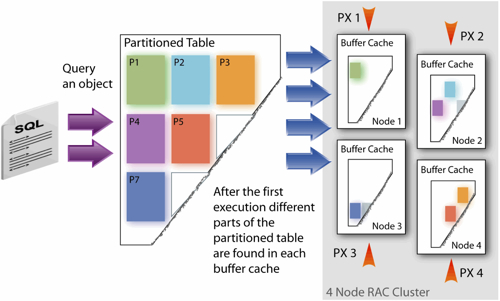 In addition, if (as above) the database concerned was in a RAC cluster, then over time all of the partitions would get copied across all of the node buffer caches, via cache fusion, as queries came in for particular nodes and which required data in other nodes' buffer cache, as this diagram shows: 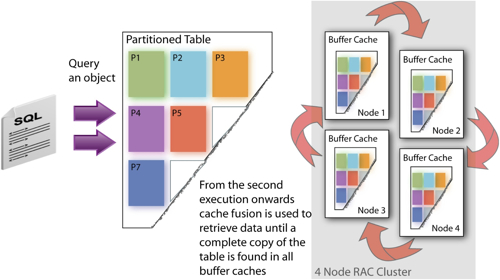 All-in-all, because of the 2% limit (or more precisely, the value of the _PARALLEL_MIN_TABLE_THRESHOLD parameter) most parallel query operations ignored the buffer cache (and therefore the available RAM on the database servers) entirely and did all their work via direct reads from disk. Given the increases in available memory though, there was clearly an opportunity to change things around and start taking advantage of it. This is where "In-Memory Parallel Query" comes in.

There's a new parameter in 11gR2 called PARALLEL_DEGREE_POLICY, which enables a bunch of new parallel query features introduced with this release. One thing it does is allows Oracle to decide whether, and how much degree of parallelism to use on a query, removing the need for you to set this manually per table, per query or whatever, with Oracle instead deciding based on the circumstances whether to use parallel query. Setting this parameter to AUTO also enables Parallel Statement Queuing, which gives Oracle the option to put a query on hold rather than have it either overwhelm the system, or more likely have its DOP scaled back so as not to do this. What this parameter also does when set to AUTO is enabled In-Memory Parallel Query.

With this feature enabled, Oracle will decide on a query-by-query basis whether to try and load the objects accessed by a statement into the aggregated buffer cache of your database server(s). There's a complex set of rules that Oracle uses to determine whether to cache these set of tables;

If the objects meet the criteria, and you are using RAC, then they will be "fragmented" and distributed amongst the nodes' buffer caches. Importantly, Oracle will know which node has got which fragment (a process called "affiinitization"), and once a fragment has been mapped all subsequent accesses of this data will happen on its particular node. If a particular node, executing its particular PX server process, actually needs data cached in another node's buffer cache, the PX Server process on the other node will send back just the results required, not the object itself, with no need for objects to be copied from node to node via cache fusion. If the data required isn't anywhere in the cache, it'll be retrieved via direct path I/O so as not to inadvertently clear everything else out of the cache. 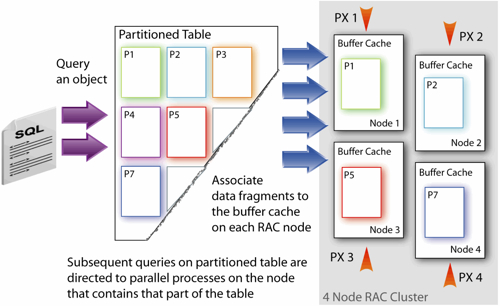 So that's the theory of how it works. As I said, it needs 11gR2 and typically you'd use it as part of a RAC setup in order to maximize the amount of memory available and cache a meaningful amount of database objects. Given that it's not RAC dependent though I guess you could probably try it out and demonstrate it on a laptop (my 8GB Macbook may well be up to it, there's a challenge for me), but anyway I'll be interesting to try it out once I come across on of our customers lucky enough to have all the prerequisites in place. In the meantime, the Oracle white paper "Parallel Execution Fundamentals in Oracle Database 11gR2" by Hermann Baer and Maria Colgan servers as a good introduction to all of the new PX features in 11gR2, if you want to read about them in more detail.

[Update 19th January : Updated article to remove comments about the feature being dependent on RAC. Thanks, Greg]

News on The BI Verdict, and an Interview with Nigel Pendse

Those of you who keep an eye on this blog, or have been in the BI and OLAP industry…

I was working with an Oracle Partner last week who asked me to QA their OBIEE project. One of…