The traditional method of modeling degenerate dimensions is to include them in the Logical Fact table itself as shown below without any aggregation. 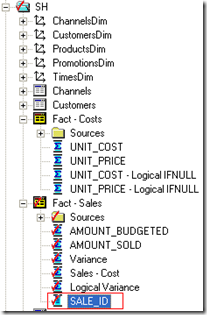 But even when you have the requirements listed above, care must be taken while exposing this attribute to the presentation layer. One of the major drawbacks of the above technique is the fact that when we model it this way, BI Server cannot enforce conforming dimension joins.

For example, lets create a report as shown below. 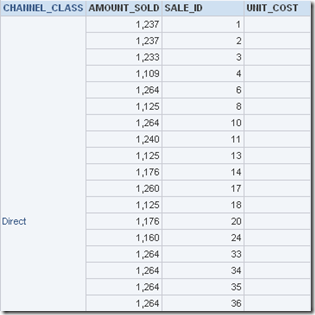 As you see, when we bring in the degenerate dimension in to the report, the UNIT_COST measure which is from the other fact table becomes NULL. One of the main reasons why this happens is, SALE_ID does not have an aggregation associated with it. For conforming dimension based joins to happen, we need dimensional attributes that can be pushed inside the GROUP BY clause of a SQL query. When we do not have an aggregate specified for a column belonging to a fact table, BI Server does not know where to push this column in the SQL query. Hence it basically nulls out the UNIT_COST measure thereby negating the conforming dimension based join. In this case, degenerate dimension SALE_ID does not conform to the COST fact. How do we resolve this?

To resolve this, there are some fundamental questions that needs to be answered. The basic question will be, when we expose degenerate dimensions to end users, we need to know what needs to happen to the measures from other fact tables. In the above example, UNIT_COST has no relation whatsoever with the degenerate dimension. In hindsight, the null in the above report seems correct as it does not have relation to the SALE_ID. But since we have modeled it as a fact attribute, we would expect the UNIT_COST measure to be calculated for each channel and then repeat itself (like a Level Based measure) for every SALE_ID as shown below. 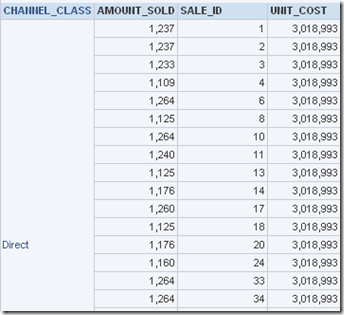 This is done by modeling the degenerate dimension as a separate dimension in BI EE as shown below. Remember, from a BI EE perspective one physical table can act as dimension or fact or both depending on how you model it. The model is shown below 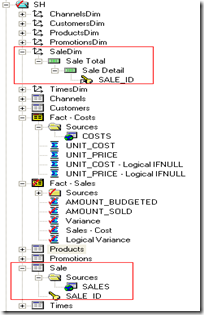 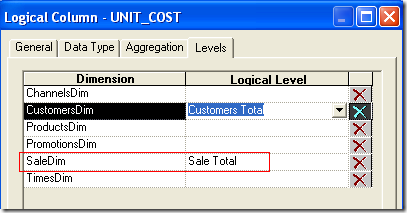 Lets assume that the fact tables FACT_COST and FACT_SALES have a degenerate dimension called BOUGHT_BY & PAID_BY respectively. Both these attributes can have only 2 values (Credit-Card or Cash). If we model them as degenerate dimensions using the traditional method, the biggest issue we will face will be the inability to use them for reporting across the fact tables. If we model it as a dimension, we can effectively use a single column for 2 differing perspectives depending on how we look at the data.

We start with basically creating a new dimension in the BMM called Payment as shown below. 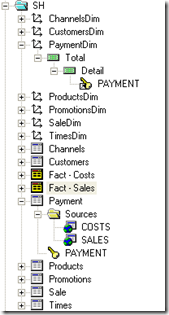 In the reporting layer, one can use this single attribute to report on 2 different fact tables even though the attribute maps to 2 different columns in the physical source.

Treating degenerate dimensions as normal dimensions in BI EE can prove more beneficial than using it as a fact attribute. Especially when you have users using BI EE as an ad-hoc analysis tool(when you do not want your model to generate wrong numbers/errors).

Along with In-Memory Parallel Execution, another new feature that came along with release 11gR2 of the Oracle Database (or…

News on The BI Verdict, and an Interview with Nigel Pendse

Those of you who keep an eye on this blog, or have been in the BI and OLAP industry…