One of the few things that i have been working on this week is in understanding how the recently released Fusion Middleware 11g will influence Oracle BI EE in the near future. As was demonstrated & presented in the last Open World by Oracle, the strategic direction of Oracle is to use Fusion Middleware 11g as the base for all Oracle products including Business Intelligence going forward. FMW 11g has an excellent set of components like Visualizations, Custom Graphs, Table & Pivot View Components, Hierarchy Viewer etc which can all add value to the existing feature set of BI EE. If Oracle can somehow make them as pluggable components in future releases, it will make it a lot easier to extend BI EE.

One of the first integrations that i noticed between Fusion Middleware and BI EE was when JDeveloper 11g Tech Preview 4 was released almost 2 years back. I had blogged about it sometime back here. This integration was very promising wherein every report in BI EE Web Catalog was exposed as a view object. So in effect, from within JDeveloper one can easily apply ADF visualizations to an existing BI EE report/dashboard. This integration was very similar to the BI Publisher - BI EE integration where instead of a template, ADF visualization is applied. Unfortunately, this feature does not exist anymore in the production release of JDeveloper 11g. Though it does not exist as a feature now, there are ways to still expose them within JDeveloper. I will cover them in future blog entries. 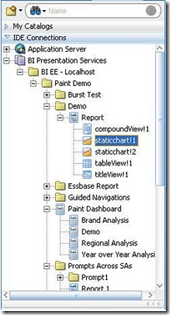 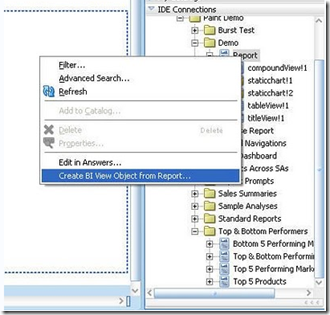 In the current release of Fusion Middleware 11g, there are quite a few BI specific visualizations that have been made available. All of these can be used even on existing BI EE 10g installations. But the only downside is, there will be quite a bit of coding involved to tie BI EE 10g with the FMW 11g graphs. Hopefully this should be made easier with BI EE 11g.

I will basically highlight some of the interesting ADF Visualization components specific to Business Intelligence in this blog entry here. Many of the graphs shown below are available as part of a sample application that needs to be obtained from OTN. All these(base components for the charts/graphs) are available out of the box with the FMW 11g installation.

FMW 11g adds some significant number of Gauge components. I have listed the important ones below. All these are very interactive like the Corda Charts that we are used to seeing in BI EE. ADF Gauges are based on SVG and hence the drills are supported here as well. 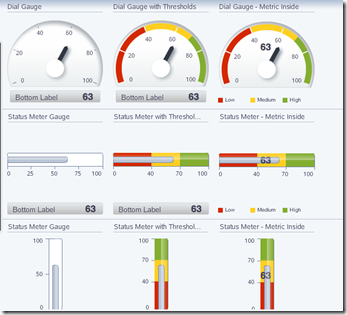 Custom panel splitters are supported as well. One can essentially have 4 graphs in a page and then hide/unhide them in a pane layout as shown below 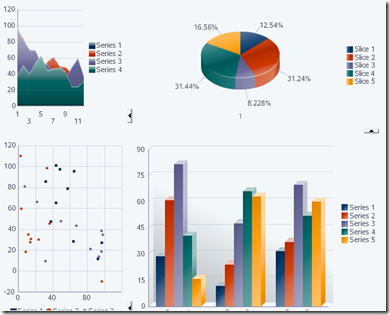 Its very interesting to note that time based interactivity in the graphs have been added. For example, one can choose a time period within a master graph, the child graphs will change automatically.

There is also an inline graph component called Spark Charts. These are charts that are embedded as a cell object in a table/pivot view. 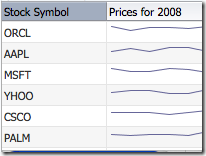 This is one area where i am seeing significant changes to the way BI EE 10g pivot table and FMW11g Pivots. Some interesting features of FMW11g pivot tables are 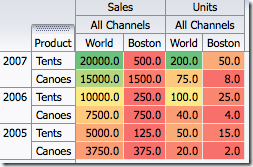 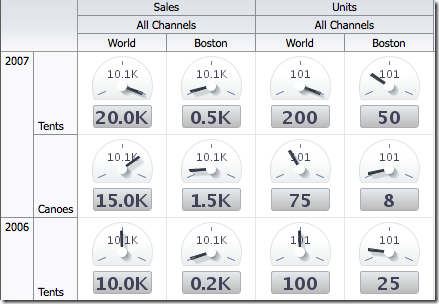 This is a significant addition to the list of supported graphs in the FMW 11g. Quite a lot of visualizations are supported on the Gantt Charts

There is another nice add-on to the normal Gantt charts i.e one can track Resource utilization as a stacked bar against Time as the base. 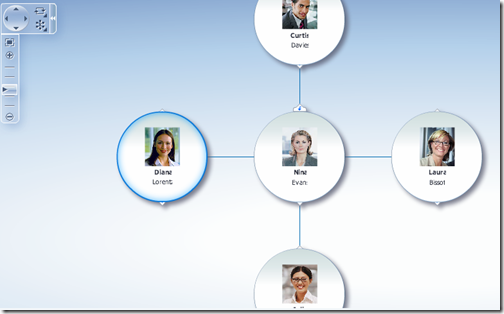 This is another area where FMW 11g adds a lot of value. It is now possible to directly reuse Maps built out of Mapviewer and render them along with BI components within the FMW framework 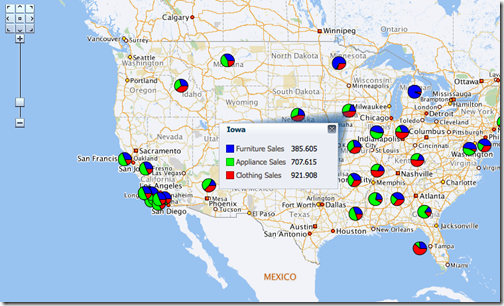 There are other areas as well where every graph/chart has improved. For example, now FMW 11g supports a set of attributes that can be modified uniformly for all the graphs. It also provides Master-Detail forms/reports. On a whole, to me, it looks like Oracle has indeed spent quite a bit of time and effort to get the BI framework in FMW ready. Now if only these can be reused out of the box directly from within the BI EE in future releases, then it could add significant dimension to the way we do BI reporting. I guess only time will tell on how these components eventually get into BI EE.

With so much of the blog devoted to OBIEE, OWB and Essbase lately, I felt like it was time…

The annual RMOUG Training Days event takes place on February 17th and 18th in Denver, CO, with some additional…