The session that I'm giving at the BI Forum in Brighton in May is entitled "Inside the Oracle BI Server", and I'm aiming to take a closer look at the architecture and functionality of this key OBIEE component. We're all fairly aware of what the BI Server does at a high level, but I thought it'd be interesting to take a closer look at what the BI Server does, particularly when it parses queries and joins datasets together.

At a very high level, the main function of the BI Server is to process inbound SQL requests against against a virtual database model, build and execute one or more physical database queries, process the data and then return it to users. The BI Server is one part of the Oracle BI Enterprise Edition Plus product family, and presents itself to query tools as one or more databases in a simple relational (star schema) model, that can then point to a much more complex set of relational, multidimensional, file and XML data sources (and in 11g, ADF objects).

Taking the standard OBIEE architecture diagram, the BI Server sits in the middle of the OBIEE set of servers and provides the query capability, security, interfaces to data sources and calculation logic for OBIEE (all of this is based on the current, 10g set of products). 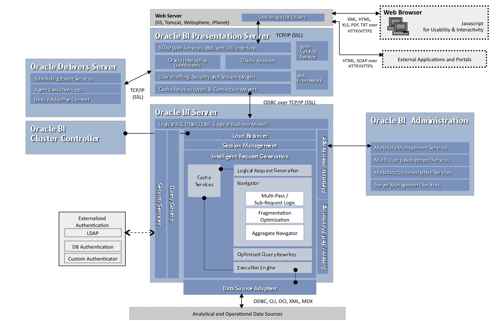 The BI Server communicates with the BI Presentation Server via ODBC, and then connects out to the various supported data sources through ODBC, OCI, XML/A, the Essbase Client API and other native protocols. A key function of the BI Server is to create a three-layer metadata model, stored in a file-based repository along with security settings, database passwords, BI Server settings, startup macros and variable definitions.

Taking a look specifically at the BI Server, it has a number of logical components. 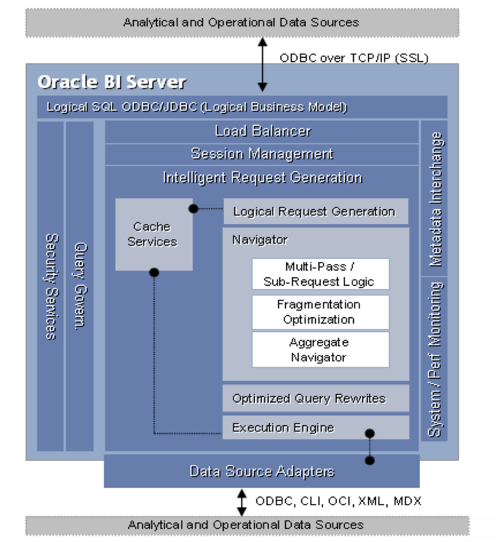 In addition, various supporting technologies, modules and services provide the infrastructure for the BI Server, including: Taking a Look at the BI Server Process Now whilst the BI Server has many characteristics of a database, compared to running Oracle on Unix which exposes many of its components (SMON, PMON, MMON, LGWR etc) as separate processes, the BI Server is just a single executable that runs under the name NQSServer.exe (or just nqsserver under Unix). The screenshot below is a view of this service (along with sawserver.exe, the BI Presentation Server) as shown in the Windows Task Manager utility. 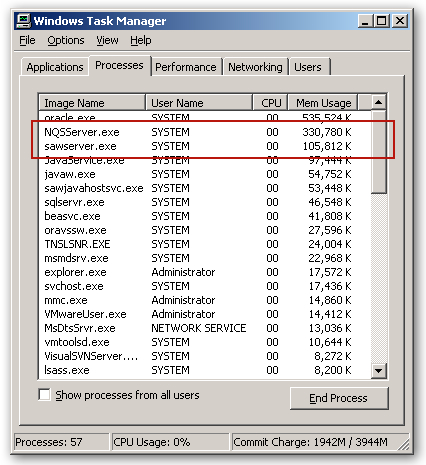 We'll get on to memory usage in a future posting in this series, but in general the amount of memory taken up by the BI Server is initially determined by the size and complexity of the repository (RPD) that is running online, with further chunks taken up by concurrent sessions and then intermittent spikes of memory when in-memory (stitch) joins take place between data sources. The BI Server creates TMP (temporary) files in the $ORACLEBIDATA/tmp directory as data is further totalled and calculated, and as cross-database joins are paged to file.

If you take a closer look at the NQSServer.exe process using a tools such as Microsoft's Process Explorer utility, you can see that it's a multi-threaded server application: 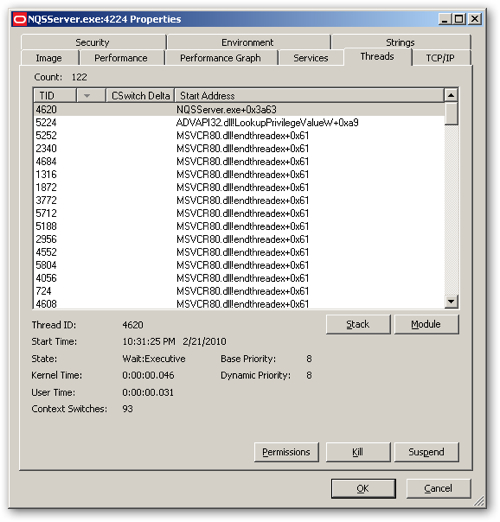 You can see that the BI Server is a C++ application that uses the Microsoft Visual C++ runtime, whilst taking a look at one of the running threads shows the various DLLs that are being used: 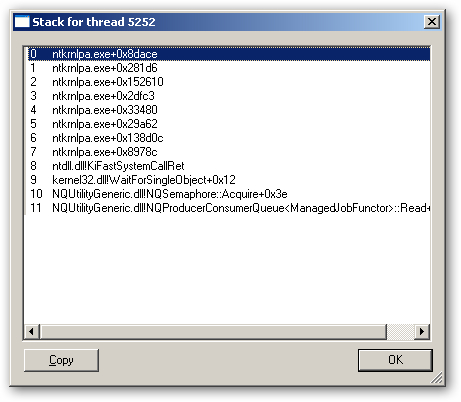 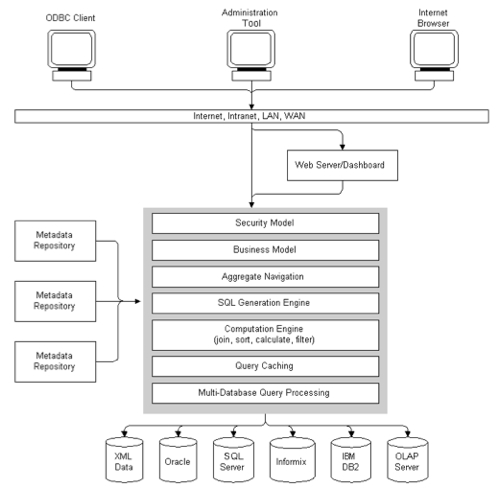 Conclusions So the BI server has some of the characteristics of a BI tool (metadata model, connectivity to data sources, security etc) and some of a regular relational database (query processing, optimization, rewrite, aggregate navigation etc) but without OLTP database features such as transactions. Its primary job is to process incoming requests against this metadata model and translate them into the physical queries required to get the data from the underlying data sources, acting more as a query broker with no data being stored locally except that held in the cache. If you're interested in a bit more history of the BI Server, including its origins as a search engine called the nQuire Query Server, take a look at this old blog post on the origins of Siebel Analytics and OBIEE where I've written up some of the original origins of the OBIEE product set.

The BI Server has one main configuration file, held at $ORACLEBI/server/config/NQSConfig.INI, which contains parameter settings in plain text. The full set of possible parameters are held in the Server Administrators' Guide within the Oracle docs, and this method of holding parameter settings looks like it'll be carried across to 11g, although the settings themselves will be maintained through Enterprise Manager rather than the Administration tool as is the case with 10g and earlier.

For now though, that's it for architecture and components and in the next posting, I'll be looking at how the BI Server, and in particular the Navigator, handles incoming requests.

After almost a week of me giving out the Puzzle 3, there was hardly any interest for this one…

One of the things that I often come across is the "up-dateable fact", that is a fact…