There are 2 types of lookup tables.

1. Sparse Lookups - A sparse lookup basically means that the main driving table does not necessarily have corresponding lookup values in the lookup table for all the id values. This can be considered to be an equivalent of a Left Outer Join.

2. Dense Lookups - A dense lookup basically means that the main driving table will have matching lookup values in the lookup table for each of its unique id value. This can be considered to be an equivalent of an inner join.

There are 2 different ways of modeling lookup tables. Lets go through each one of them in this blog entry.

We have 2 tables, CUSTOMERS and CUSTOMER_LKP. CUSTOMERS table has all the details of a customer with CUST_ID being the unique primary key. CUSTOMER_LKP has 3 columns CUST_ID, CUST_INCOME_LEVEL and CUST_MARITAL_STATUS with CUST_ID being the primary key. The main difference between these 2 tables is, not all customers in the main CUSTOMERS table have a corresponding income level and marital status. 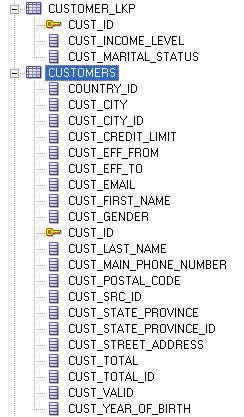 Now, in the Business Model and Mapping layer, lets create a new column called Customer Income Level. After that is created, lets go to the LTS mapping and apply the following the function. If you have more than one column as a primary key, the order of columns used in the key should match with the column order in the Lookup function. 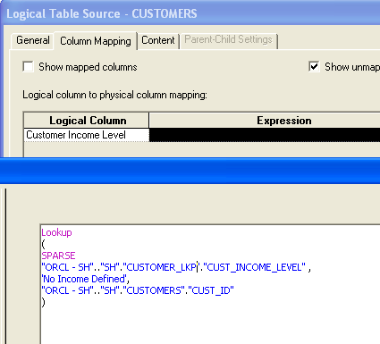 What we have done here is we have directly referenced the lookup value column in our lookup function. Since not all customers have an income level set, SPARSE is used. The basic syntax of lookup functions is given below

Lets now create a report as shown below 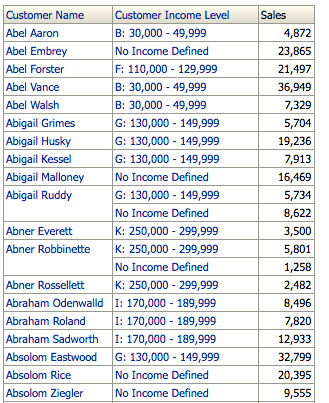 Wherever the Customer Income Level is not defined those customers get defaulted to No Income Defined value. If we look at the underlying database query, there would be a left outer join that would be pushed automatically into the query due to this lookup function. 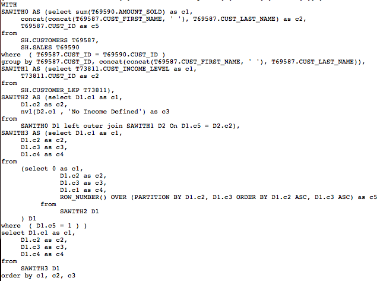 11g now supports doing lookup operation in its own memory by modeling a logical table as a lookup table. For example, lets consider the below currency conversion exchange rates table. 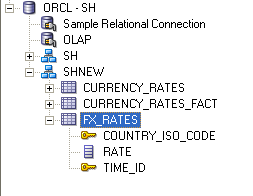 This rates table has a composite primary key. To use the BMM lookups, lets create a new logical table in the BMM layer to hold the exchange rates table as shown below 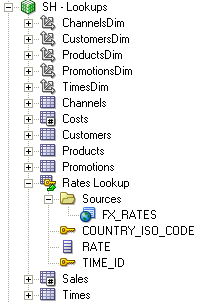 To denote a table as a BMM lookup table, we need to enable the lookup option (if you notice, there is no more bridge table check box option like in 10g but just a lookup option) 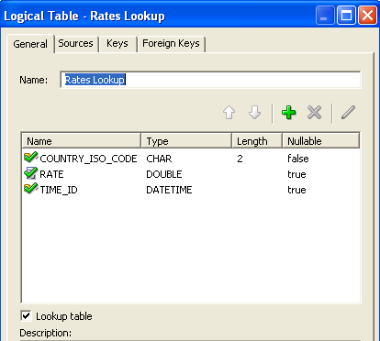 When we enable a logical table as a lookup table, that means that this logical table does not require any BMM joins to either the fact or the dimension. So we can now have standalone tables in the BMM layer in 11g.

After enabling this, lets create a new logical column for extracting the rates. Since we will have a rate for every country and day, we will use DENSE lookups in this case. The function used for doing this is given below 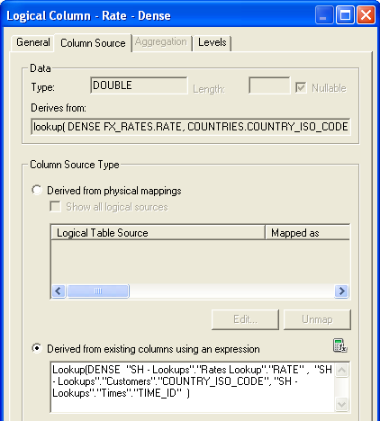 The syntax for the lookup functions remain the same as the one that we used in the physical lookups. But here we need to use logical table names instead of physical table names. To use this rate as part of a FX restatement, multiply the measures with the above rate lookup column. Lets now create a report and look at the query generated 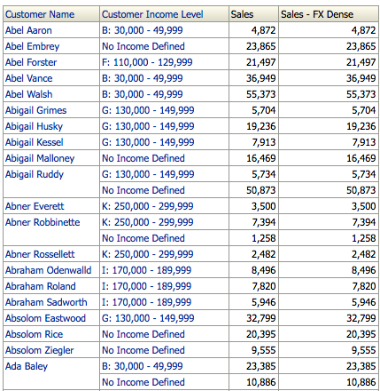 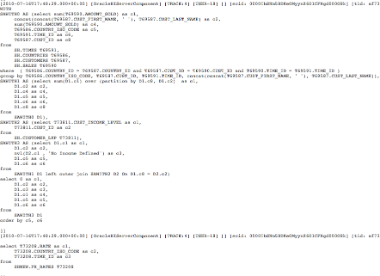 The BMM lookup is now fired as a separate query. BI Server will do the in-memory joins between the rates and the measures & will do the aggregation as well.