Mark has already explained the new Parent-Child hierarchy new feature in 11g here. Parent Child hierarchies are different from normal level based hierarchies not only in the nature of their structure but also in the way aggregations are done. For example, in a level based hierarchy, the most common type of aggregation that is done involves rolling up the numbers from the lower most level. But in the case of parent-child hierarchy, an aggregation by default enforces the roll-up across all descendant members. To understand this lets try to take this through an example.

Lets consider a sales department with the employee hierarchy shown below

Its a simple parent child employee hierarchy found in the oracle HR schema. Now the requirement for us is to model the Salary attribute of an employee in 3 ways

The above requirement is quite straightforward, but to achieve similar such aggregations in a normal level-based hierarchy, we will have introduce fragmentation & other techniques. But with parent-child hierarchy modeling now available in BI EE, all the above 3 requirements can quite easily be achieved.

We start off with modeling this as a normal dimension table. As shown in Mark's blog entry, we then create the Parent-Child table that stores all the relationships within the employee hierarchy (if you look at the script used in creating this, it will be containing a Connect By statement that will connect a root hierarchical node to every member that is part of its hierarchy). 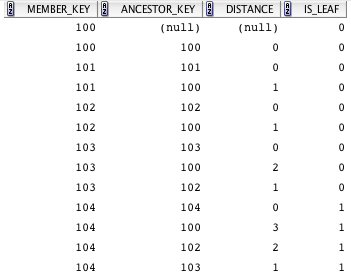 Once this is created, we start with including the Salary as an attribute within the Employee dimension itself

This will serve our first requirement i.e show salary as an attribute of every employee. Now, to model the 2nd requirement i.e. to model salary as a measure and then make it to rollup from all the intermediary hierarchical members, we start with defining an alias on the main Employee table. Then join this table to the custom parent child employee table. The join structure of all the 3 tables is given below 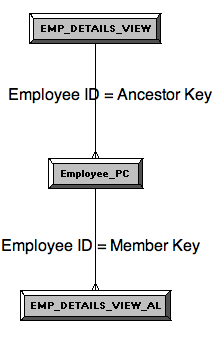 Lets now look at the report now and see what BI EE generates. 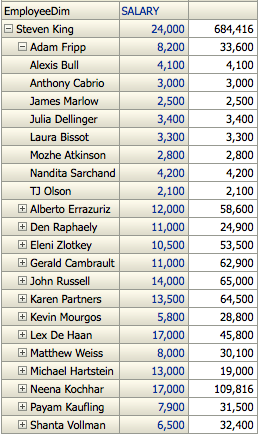 As you see, BI EE has generated the correct results with the roll-up of intermediary members as well. This is something that is quite difficult to model in BI EE 10g. If we look at the query generated (just the key one that generates the measure as BI EE now generates lots of intermediary sub-queries to support contextual drilling) you would notice that the default Parent-Child behavior is to achieve a roll-up across a hierarchy

To achieve the 3rd requirement i.e. to model a level based hierarchy kind of rollups from level-0, we create another alias in the physical layer and then model it the same way as the 2nd requirement. In the fact logical table, we then create a new measure that will map to the new physical alias as shown below

To ensure that we roll-up only from level-0 members, we then apply a filter in the fact logical table source as shown below 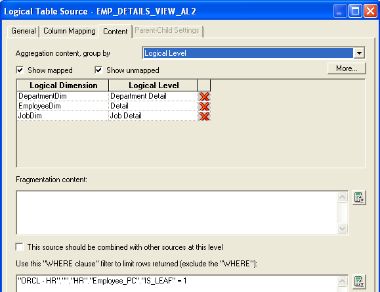 Lets now take a look at what BI EE generates 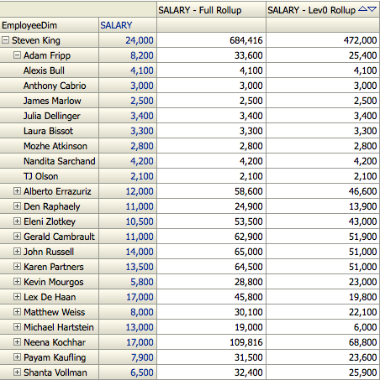 As you see, BI EE now generates the roll-ups only from level-0 members as against every descendant. We can have even more granular roll-ups based on custom defined attributes.