If you're evaluating OBIEE 11g and working through the long list of new features, one of the topics that's potentially most confusing is the new security setup. Whilst basic concepts such as object-level and data-level security are the same in 11g as in 10g, Oracle Fusion Middleware now comes into the picture and security is now much more aligned with the rest of the Oracle middleware stack. So what are the important things to know, how do we now administer users and groups, and how do we perform tasks such as linking security to Microsoft Active Directory?

As a starting point, let's have a think about what we mean by security, and what tasks we want to manage as part of security. How about:

Looking away from OBIEE specifically for the moment, in general terms security is considered to be made up of three topic areas: To address these three requirements, OBIEE 11g has three security "providers" which are used together with various administration screens in the BI Administration tool, in the Presentation Server administration pages, in Fusion Middleware Control and in the WebLogic Server Admin Console. Overall, OBIEE 11g uses a feature of Oracle Fusion Middleware 11g called Oracle Platform Security Services (OPSS), the underlying security platform that provides security to Oracle Fusion MIddleware. OBIEE 11g delegates security to OPSS which uses features such as the Credential Store Framework, and the WLS LDAP Server to provide security for your BI system.

So, where do we start with all this? Well, to take OBIEE 11g as a whole, this new releases relies on three "security providers":

Most of the old 10g features for security are still there, so that you can, for example, use the BI Administration tool to link the repository to an LDAP server, and get hold of users and groups through Init Blocks and DBMS_LDAP. But users and groups themselves have moved out of the repository to the WLS LDAP Server, and the recommendation is to try and migrate old settings to the new setup, or at least use the new setup for new implementations.

The diagram below shows a schematic for Oracle Platform Security Services: 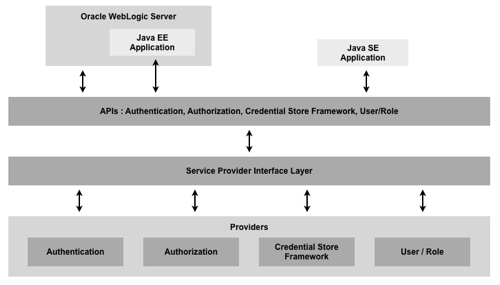 OPSS has a number of concepts and components that are worth being aware of:

OBIEE 11g also comes with what's termed the Default Security Configuration. This is the pre-built set of users, groups, application roles and application policies that are set up during install for new installations of OBIEE, and it means for example that to set up new users and groups you go to the WebLogic Server Admin Console where you'll see them listed, like this:

Notice the "DefaultAuthenticator" entry under the Provider column in the user listing? That means that the WLS LDAP Server (the "DefaultAuthenticator" as set up in OPSS) is providing details of that user. If I connected ActiveDirectory or OID to OPSS, you'd see other authentication providers listed here, and you'd only be able to create new users when working with the WLS LDAP Server, using the external directory's admin pages to set up users and groups for them.

This addresses the requirement for an authentication provider, and the default configuration also provides a default policy store provider, which is accessed through Fusion Middleware Control and allows us to create and maintain application roles, assign policies to the roles and then map our LDAP groups to these roles. 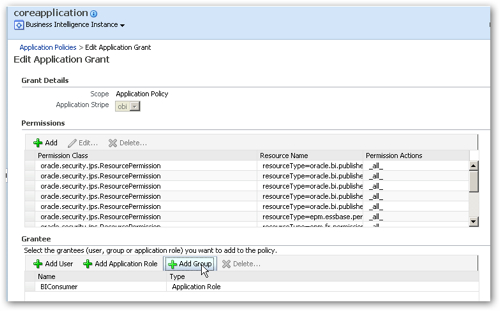 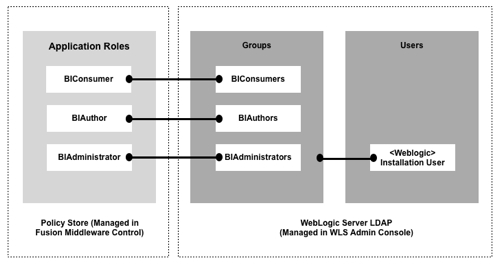 These particular roles in the policy store are recursive so that, for example, the BIAdministrator role is also granted the BIAuthor role, and the BIAuthor role is granted the BIConsumer role. So what then is an application role, and what is an application policy, and how do these relate to the RPD groups and webcat groups that you used to get in OBIEE 10g?

Application roles and policies are I guess the big new thing in OBIEE 11g security. Instead of defining security in terms of groups in the RPD or an LDAP server, OBIEE 11g uses a role-based approach to which permissions and privileges are assigned. Application roles represent a functional role (such as Marketing Analyst, Northern User) which a user has, which gives them the privileges to do that role. Creating this abstraction layer away from the physical groups that are found in an LDAP server gives you a number of advantages:

So what typically happens when you create users and groups, and assign them to application roles, is as follows: What you don't need to do anymore is have some init block system using DBMS_LDAP to go and retrieve group memberships from your LDAP server, as OBIEE 11g now has direct access to the server (through OPSS) and you'll automatically see details of users, plus their application roles, in the Identity Manager within the 11g BI Administration tool, like this: 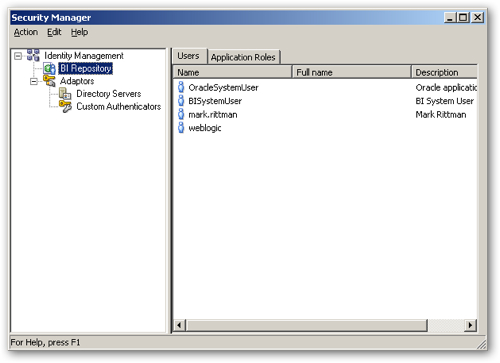 You also don't need to create matching webcat groups for your RPD groups as these are now replaced by application roles, though catalog groups are still supported for backwards compatibility. For now though, that's an overview of OBIEE 11g security, and I'll follow this up over the next few days with two more postings; one on working with the default security configuration that ships with OBIEE 11g, and another on connecting OBIEE 11g and OPSS to Microsoft Active Directory, probably the most common post-install security task for 11g.