The long-awaited 11.1.1.5 release of OBIEE became available on OTN last Friday, and we've been downloading it and putting it through its paces over the weekend. This is the first major patch release after the initial release of OBIEE 11g, with enhancements promised in terms of platforms and data sources supported, simplification of the install process, and a number of new features (documentation is here). So now it's out, how does it look?

Option for a smaller-footprint install

One of the criticisms of the first OBIEE 11g release was that it took up about twice as much RAM as the 10g release, due to the move to WebLogic Server as the underlying JEE application server, and more importantly the mandatory use of both a WLS administration server, and a managed server, for the infrastructure. This meant that you really needed a laptop or PC with 4GB of memory to run or demo OBIEE 11g properly. The 11.1.1.5 release changes the "Simple" install type within the Universal Installer to instead, lay down just a WLS administration server and put all of the Java components in this instead. 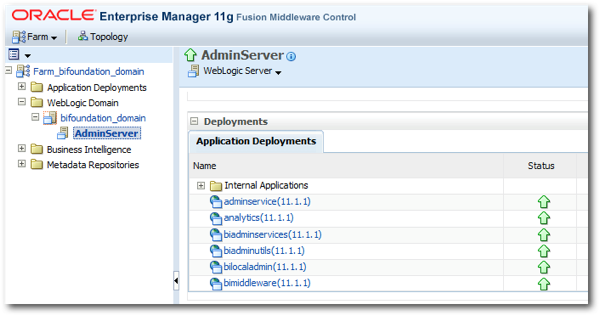 This reduces the memory requirement for OBIEE 11g by around 700MB and also makes administration a bit simpler for demo / POC situations. One side-effect is that when running in this single JEE server mode, OBIEE runs under port 7001 instead of 9704, something that also happened with 10g when you ran it under WebLogic. But this change is certainly welcome and will make setting up demo and training environments a lot simpler and easier.

Improvements to the Install Process

There's also a bunch of other improvements and updates to the install process including: the 64-bit install on Linux now lays down the 64-bit JVM rather than the 32-bit one in error, meaning that you don't have to do a separate "Software Only" install to get the correct JVM architecture; the 64-bit Windows installation now installs an Administration Tool that works in 64-bit mode, avoiding the need for a separate install; there's also now an installer for Sun Solaris SPARC to go with 32 and 64-bit Windows and Linux.

From what we can tell so far, it looks like going from 11.1.1.3 to 11.1.1.5 would be what Oracle term an "out-of-place upgrade", meaning that you would need to install 11.1.1.5 in a separate Middleware Home to 11.1.1.3 (including creating new BIPLATFORM and MDS schemas using the RCU), and then manually migrate your BI artifacts from the old environment to the new. One of the changes in 11.1.1.5 is that you can point it to an existing MDS schema (something useful if you've already deployed MDS, as part of FMW11g, elsewhere), but it doesn't look like you can point it to your previous (11.1.1.3) MDS schema. Keep an eye out on the blog in the next few months though for more coverage of upgrades, as Oracle plan to release an improved upgrade guide in the near future and we'll be covering it extensively. UPDATE : There is actually an in-place upgrade process, see the comments to this article. I'll be covering this on the blog in the next week or so.

Just a small change here, but the script that starts OBIEE (Start BI Services.cmd) now remembers your WebLogic username and password after first use (by writing it to the boot.properties file(s)), avoiding the need for you to keep entering credentials each time you start up the system. Still no (out of the box) Windows services for the WebLogic administration and managed servers though.

SAP B/W Native connections, Oracle OLAP connections direct to the AW, and TimesTen in-memory database support are provided with this patchset, as well as a new data model diagrammer that means that I'll need to redo all the screenshots in the RPD modelling book chapter that I've just written :-( 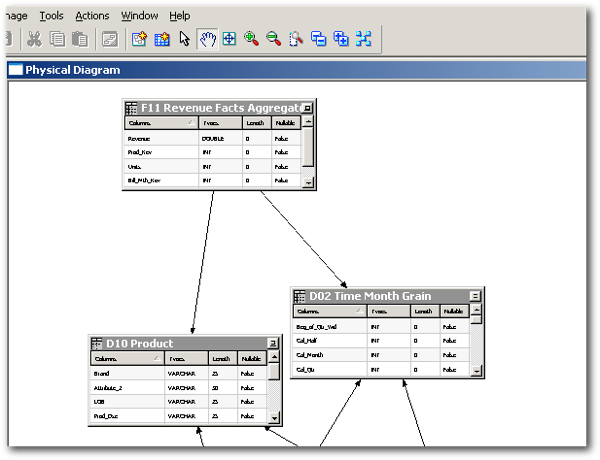 I think with the new data sources supported, we'll have to put these through our paces before "signing them off" for general use. For example, whilst TimesTen will be supported, we'll have to really wait for improvements to core TimesTen functionality in terms of support for fast aggregations, use of analytic functions and so on before it's really ready for prime-time use with OBIEE. Similarly, whilst direct Oracle OLAP connections now seem to be supported, as with Essbase support "the devil will be in the detail" and I would expect there to be a couple of releases before this new datasource works smoothly. Another welcome new RPD feature in this release is the new "validaterpd" utility, alongside the current command-line RPD utilities, which will be useful in scripting the deployment of an RPD and making sure it'll work once in production.

Tenant Support within the Presentation Catalog and the Catalog Manager Utility

One of the limitations in earlier releases of OBIEE when you wanted to deliver BI as a "shared" or "tenanted" service, was around keeping everything separate in the catalog shared and user directories. The 11.1.1.5 release of the Catalog Manager has new command-line options for provisioning and de-provisioning tenants within a Catalog which looks like it'll make this easier. I haven't tried this myself yet, but it's a useful new feature to know about. UPDATE: I've been advised by the development team that this new feature is at an early stage, and is more in support of forthcoming future functionality. Be careful at this stage if you plan to try this new feature, as I'm not sure it's fully "supported" yet.

11.1.1.5 also introduces (though you need to install it separately) a simplified, alternative interface for creating analyses called "BI Composer". This appears to be an interface initially aimed at the "accessibility" sector that takes you through steps in a wizard to create an analysis, but also might be a cut-down report creation UI that you can embed in other ADF applications.

Again, it's not something we've had a chance to play around with yet, but keep an eye on the blog later this week for some first impressions.

For end-users, this is the main "headline" new feature in 11.1.1.5. Whilst OBIEE 10g had an iPhone client, it was fairly limited in functionality and also required you to put the Presentation Server in "non-Flash" mode, which impacted everyone else using the regular HTML dashboard interface. With 11.1.1.5, Oracle have "re-imagined" the iPad and iPhone experience and brought out dedicated clients for the IOS platform, with Android likely to follow later on. The screenshot below is courtesy of the Oracle PR Flickr page, and there's more screenshots of the mobile client here: 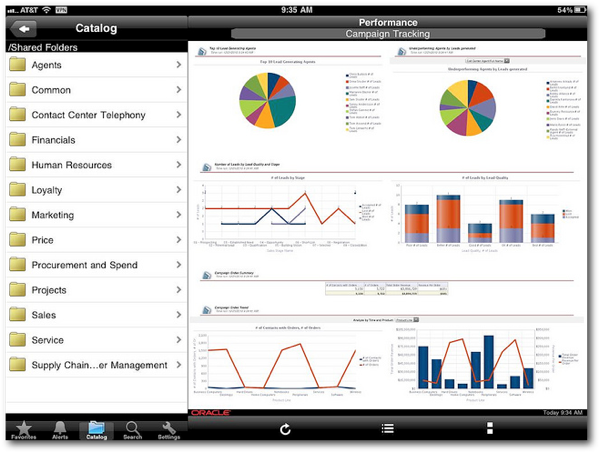 Another welcome new UI improvement is in BI Publisher, which now features a Qlikview-like "list selector" that you can include in layouts created with the Online Layout Editor. You can try this out yourself if you install 11.1.1.5 as it's part of a new BI Publisher demo that ships with it, based around analyzing passenger traffic at SFO. BI Publisher has come on a long way in the 11g release, and I'd encourage you to take a look at it if you've not investigated BI Publisher properly before (I call it "OBIEE 11g's best-kept secret". 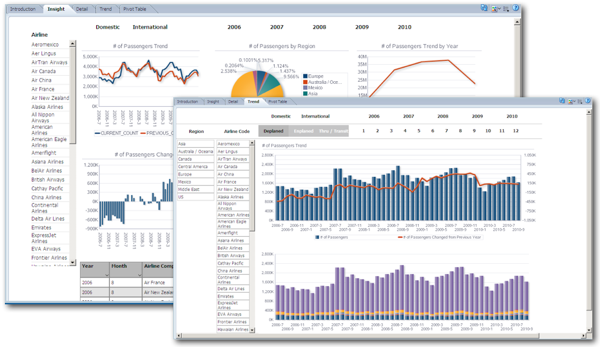 Some Updates and Improvements to the KPI Editor

If you're using the Scorecard and Strategy Management feature within OBIEE (for KPIs and scorecards), the KPI editor has seen a couple of changes, including "thresholds" being renamed as "states" and a new feature for adding custom attributes to the KPI. If you're coming to our BI Forum event in Atlanta in May, one of the sessions is on futures for Scorecard and Strategy Management and I'll be keen to see where this product is going.

Separate to this release but enabled by it, the 7.9.6.3 release of Oracle BI Applications introduces support for using OBIEE 11g as a BI platform. For users of the BI Apps, this is probably the headline feature and it now means that you can use features such as the new user interface, OLAP analysis using hierarchical columns, and whatever new features in 11g Oracle could bring through to this (probably final) BI Apps version before BI Apps 11g. Again courtesy of the Oracle PR Flickr website, here's a screenshot of BI Apps 7.9.6.3 in all it's 11g-glory (more screenshots here): 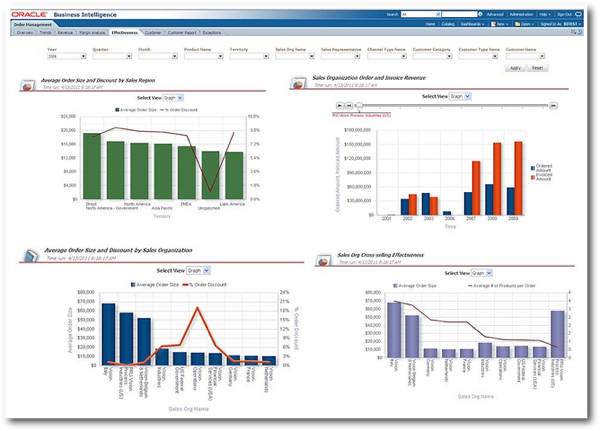 So, now that 11.1.1.5 is in the bag, what's next? Well, due to Oracle's revenue recognition rules, no-one outside of Oracle knows for certain, but I'd be expecting further minor patch releases in the near future to fix issues as they arise, and then maybe another major patch release (11.1.1.6?) towards the end of this year to deliver some substantial new visualization and metadata modeling new features, plus closer integration with mid-tier data sources such as Essbase and TimesTen. I think we're also fairly likely to see an Exadata-style BI appliance getting unveiled at this year's OpenWorld, bringing together perhaps a couple of Exadata cells, maybe something ExaLogic and also TimesTen delivered embedded as an in-memory layer. All this is just speculation though at this point, so keep an eye on the blog for more news as it becomes available.