Something interesting that came out of the US BI Forum last week in Atlanta, was a preview of the soon-to-be-arriving OBIEE 11.1.1.5 SampleApp. If you've used the full SampleApp that comes with OBIEE 11.1.1.3 (separately downloadable from OTN) you'll know that it featured examples of things like hierarchical columns, maps, scorecards, analyses and other new 11.1.1.3 features, and the 11.1.1.5 version takes this further to include a bunch of new Essbase, TimesTen, visualization and other features.

The basic idea with the OBIEE SampleApp is to showcase what's possible with OBIEE 11g, and to highlight "best practices" in terms of RPD modeling, use of actions and navigation, visualizations and so on. It's pretty well documented, both in terms of diagrams and data models of the underlying data sources, data models and hierarchies, and also in terms of how the RPD and web catalog are laid out. If you're interested in seeing how a well-structured, well-put together OBIEE system might look, it's a good starting point, and if you're also interested in how some of the more "complex" OBIEE techniques such as data federation, actions and scorecards are put together, it might give you some useful clues.

The 11.1.15 SampleApp, like the previous version, starts off with a general index of its content, broken down into quick demos (including a new Essbase-specific one), functional examples, examples for actionable intelligence (useful if you're struggling to get the Action Framework setup, but want to see some working examples), published reporting (BI Publisher), some source-specific examples including Oracle OLAP and TimesTen, and some useful examples around logical modeling, logical aggregations and physical layer features. 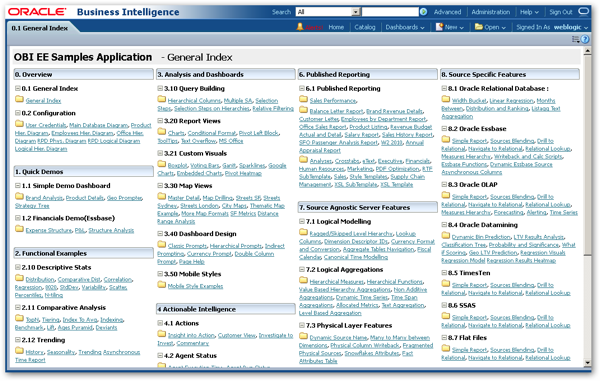 From an Essbase perspective, I was interested to look at the new Financials Demo (Essbase) dashboard, which came with an analysis showing how financial (P&L)-style reports can be put together. Notice how hierarchical columns have been used to create the asymmetric drilling for the accounts dimension, and how individual row formatting has been used to separate out the different account groupings. 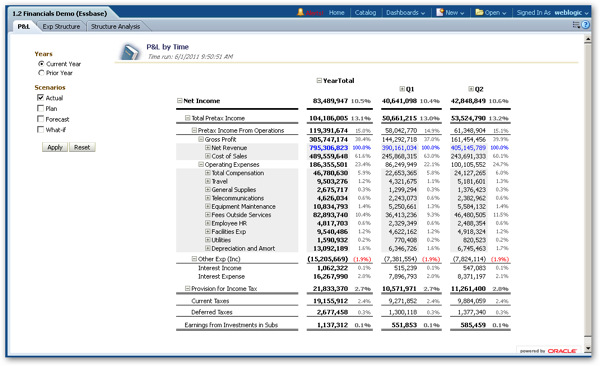 There's also a nice example of writeback to the Essbase database, to update some "what-if" values, together with some action links that invoke Essbase calculation scripts to re-calculate the cube using the new values. Both the writeback and the calc script call work via custom JSP pages that call the Essbase Java API, and the calc script call is a good example of where the Action Framework is being used to "fill in" missing functionality, in this case "what if" analysis using Essbase data.

One of the new areas of functionality thats likely to be coming in future releases of OBIEE are more "dense" visualizations, where graphs are shown within grids, for example, or Stephen Few-style sparklines and other visualizations start to make their way into the product. In the meantime, the 11.1.1.5 SampleApp has a number of examples of JQuery Charts being used within dashboards to extend OBIEE's charting capabilities, including this example of sparklines and other dense charts: 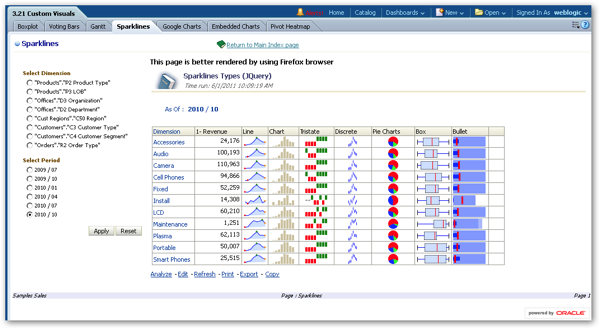 and some more examples using Google Charts, rendering them within HTML columns. 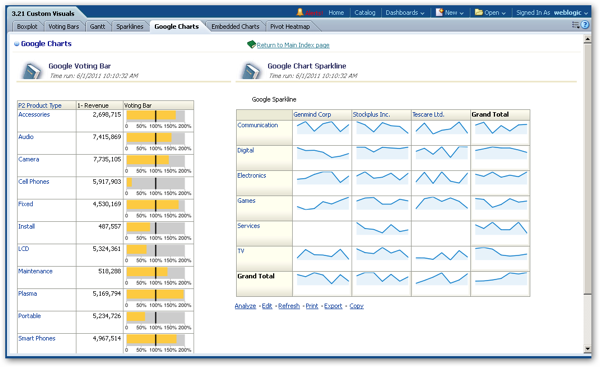 This latest release of the SampleApp also includes dashboards specific to sources such as Oracle Data Mining, Oracle TimesTen, plus enhanced dashboards for Essbase, Oracle OLAP and so on. The Data Mining dashboard is particularly interesting as it includes some good examples of using probability, regression, classification and other data mining algorithms using OBIEE, which could provide a useful starting point for anyone looking to include data mining in their BI solution. 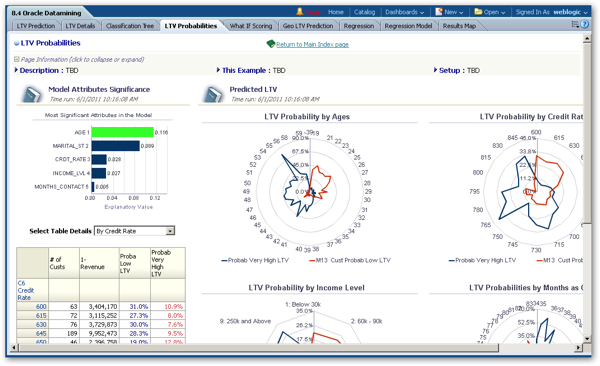 The other useful thing about the SampleApp is taking a dig through the RPD. There's some good examples of data federation and other logical modeling techniques in there, and they're all well documented so again, take a look through it if you're after some tips on how to do the "non-obvious" RPD modeling techniques. 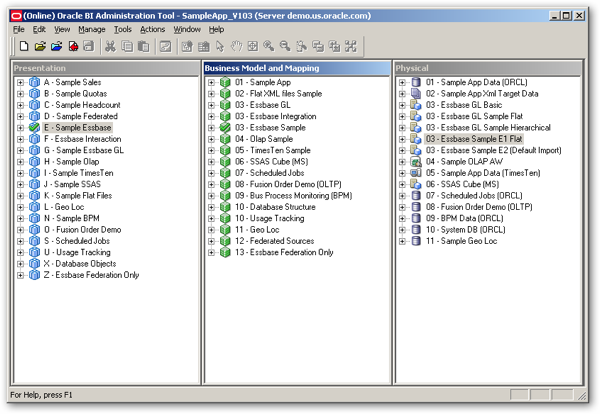 The full release of the 11.1.1.5 SampleApp should be available for download on OTN in the next couple of weeks, and thanks to Philippe Lions for giving us a preview at the BI Forum in Atlanta.