So we'll start this week's focus on OBIEE 11g security with the topic that most people associate with "security" around reports - row-level security. Row-level security is where groups of users have access to a set of reports, but they all see different sets of data within the reports due to filters being applied silently in the background. As a report author you can of course apply filters to an analysis, but in this case I think what people generally associate row-level security with is filters that are applied automatically, according to a set of rules, without the user being aware of it or even filters being visible when you add a filter view to the analysis' compound layout.

In the two analysis screenshots below, for example, one user sees one set of stores when they view a particular report, whereas another user viewing the same report gets to see a completely different set of stores, but no filters have been explicitly added to the analysis - instead, some other process is applying row-level security to the analysis' data in the background, automatically.

The advantage of row-level security, particularly if it's applied automatically by the BI Server in the background, is that you can roll-out generic reports across all of your users, but each one will provide a customised view showing just the data, or "rows", that apply to that user, even if the report designer forgets to add filters to the analysis themselves to restrict user's views of data to the correct region, in this case.

You can also apply row-level filtering at the database level, by using what's called Virtual Private Databases, and then enabling this in the physical database settings, but that's a topic for another day. In addition, of course the developers of individual analyses and reports can add filters to the report definition, which again can make reference to session or other variables. But for now, let's look at the most common way to set up background row-level filtering and security.

Assuming that we've got two tables stored in a database somewhere, that list out users and the region they are assigned to, like this:

The steps to set up security to restrict users to a single region's worth of data would look like this:

Now, when users log in that have entries in this table, you should see that queries that reference either the Dim Stores table (in this case), or if you've set it up like this, any query against the fact table, will have the required restriction applied to the rows of data returned. If you don't see this restriction happening, check the nqserver.log file for an error message like:

which indicates that there's an error in your SQL, and the session variable value couldn't be set.

So what happens if you log in as the weblogic or biadmin user, for example, who doesn't have an entry in this table, or indeed a regular user that's not in the table? If you try it out, you'll see that in these cases, administration users get all values returned, whereas regular users get an error message saying that the variable hasn't been populated, which probably is the behaviour that you wanted.

The other obvious question is how you would go about assigning more than one group to a particular user. For example, if you wanted the sfranceso user to be able to see all of the San Francisco regions, not just North SF, you could put entries in the STAFF_REGIONS table like this: 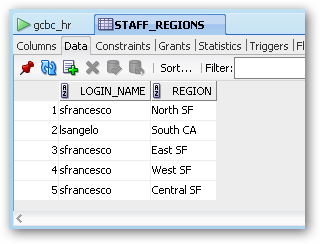 But the SQL in the variable definition that we defined earlier is expecting a single value, not a set of values. The way that you in fact deal with this is to create what's called a "row-wise initialization" variable that can contain multiple values - internally, it still holds a single value, but this consists of all the values you load in, separated by semi-colons.

To define a row-wize initialised variable, follow these steps:

So that's the basics of how row-level security works in OBIEE - you define a session variable using an initialisation block, which then gets used to create a data filter "behind the scenes" using the Identity Manager. There's a few variants around this - you might use Virtual Private Database, for example, to enforce the row-level security at the database level - but this is the most common approach.

One other row-level filtering approach that you might sometimes come across though is where the filter is applied at the logical table source level. If you open up the repository and double-click on a logical table source within the Business Model and Mapping layer, then click on the Content tab, you'll that one of the sections lets you type in an SQL WHERE clause to limit the rows returned, like this: 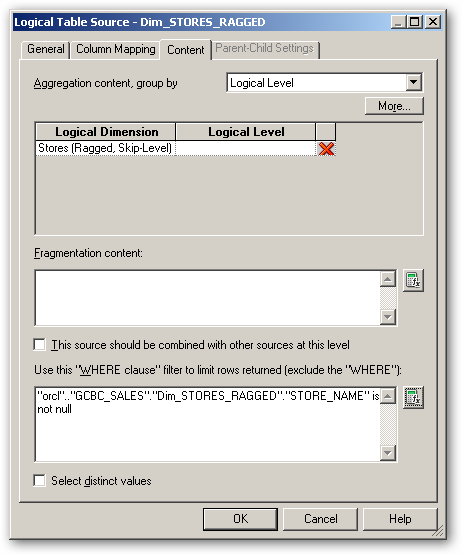 By default, and in most cases, this section is usually empty for most logical table sources, but you could use it to enforce row-level security for all users, without reference to a particular user or role, like this:

I personally don't tend to use this type of approach to row-level security, as it's applied across all users regardless of roles etc, and also it's not so obvious to find, hidden away in a logical table source definition. But you ought to be aware of how it's done, as its used extensively, for example, by Oracle with the BI Applications repository model.

So that's an overview of row-level security. Tomorrow, we'll look at subject area (and table and column-level) security, and also how we restrict users to only be allowed to use certain front-end functions, so that for example they can view dashboards, but not use the analysis, scorecard or alerts editors.