This week, in preparation for the final, Security chapter of the book that I'm writing, I'm running through the key areas in OBIEE 11g and inviting feedback on what readers are encountering in the field. So far we've looked at row-level security and subject area/functional-area security, which are pretty-straightforward and haven't changed much since OBIEE 10g. Where things do start to get different, though, is when you start to look at where user details are stored, and how you administer the groups, or in OBIEE 11g application roles, that they are assigned to. 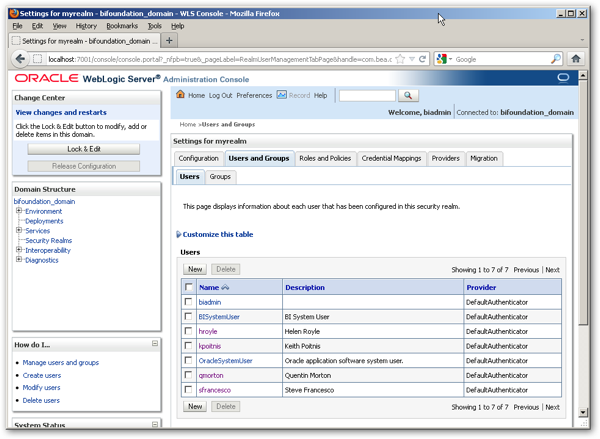 Within OBIEE itself, in common with all Oracle Fusion Middleware 11g-based products, you actually assign application permissions and privileges to application roles, not these LDAP groups. Behind the scenes, the LDAP groups and users in your WLS LDAP server are mapped to these application roles, allowing you to create simple 1:1 role to group mappings if you want, as shown in the diagram below: 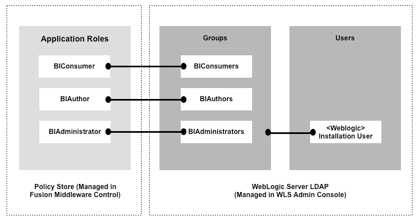 or more complex, abstracted ones that give you the ability to map LDAP groups that don't necessarily map to the BI groups you'd like to use, to a set of application roles that do.

With OBIEE 10g, the security setup between the BI Presentation Server, BI Server and external LDAP directories and authenticators looked as in the diagram below, with the OC4J or other J2EE/IIS application server hosting the Analytics application and BI Publisher (amongst other front-end components), and the Presentation Server then authentication against the BI Server, which in turn may have contacted one or more external directories to provide authentication. 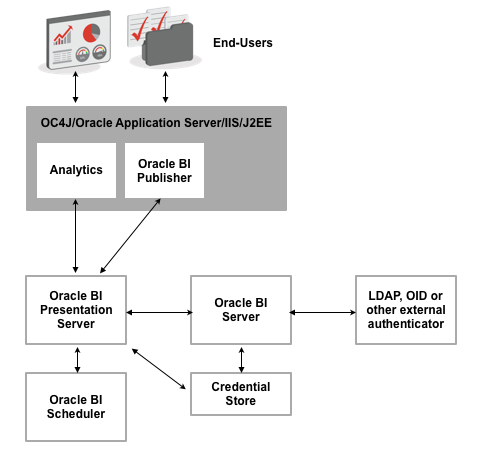 A credential-store was created, post-install, to hold the system user account details required to permit communication between BI Publisher, the Scheduler and BI Presentation Services, and all user accounts and groups were held in the BI Server, and replicated to the Presentation Server as users first logged in. Whilst this worked fairly well, the disadvantages were:

But at least, in hindsight, it has the virtue of simplicity.

OBIEE 11g, through its use of the Fusion Middleware platform, moves to an architecture where the BI Server no longer stores users and group details, no longer provides the actual authentication, but instead delegates this process to Fusion Middleware's Oracle Platform Security Services, so that the security architecture now looks like this: 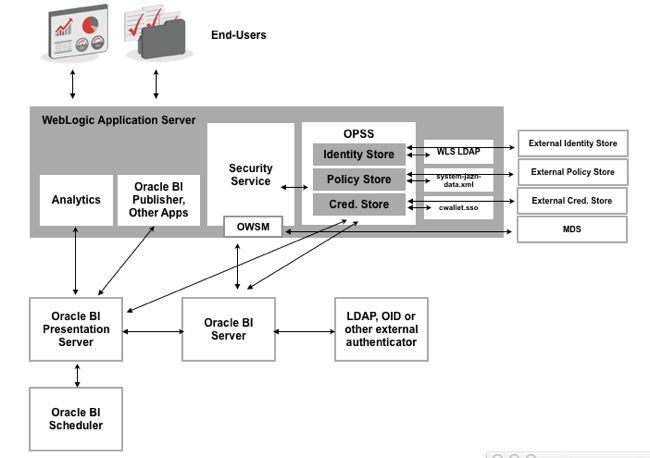 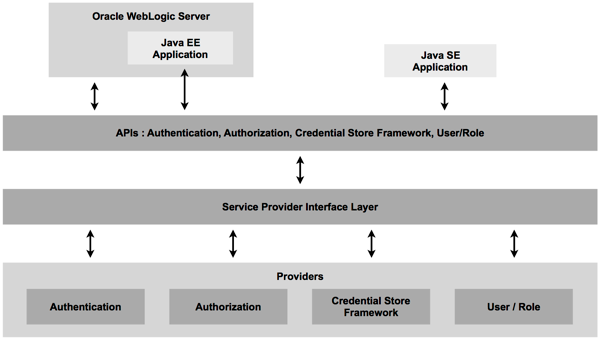 All of these services are registered through things called providers, and we'll look in more detail at providers and how you use them to link to Active Directory, for example, in tomorrow's post. For now though, just bear in mind that security has now moved to WebLogic and Fusion Middleware, and we're using the Fusion Middleware concept of application roles when we come to assign permissions and privileges to groups of users.

These roles correspond to a set of LDAP groups within the embedded WebLogic Server LDAP Server that have almost the same names (plural rather than singular) as these application roles:

To create new users on an out-of-the-box OBIEE 11g system, you would use the Oracle WebLogic Server Administration Console, which can be accessed through your Web browser at http://[machine_name]:7001/console. The typical steps to create a new user, in this case called auser, are as follows:

So now you've created a new user and added them to the BIAuthors group; in the background - actually, in the policy store within Oracle Platform Security Services -  this ends up granting the user the BIAuthor application role as well, as this group has been granted this role in the OPSS policy store, which you can access in this way:

So at this point, there are three administrative tasks that you might need to perform around the WebLogic LDAP server, and application roles and policies:

We'll look at what's involved with these three tasks in tomorrow's posting.