FMW can be a bit of a sensitive soul when it comes to networking. Something that always seems to antagonise it is running within a VM (both VMWare Fusion and VirtualBox, since you ask). Being on-site at clients I'll often find my laptop's network details change, and because I'm using bridged-networking, the IP of the VM will change. Result: kaput FMW until I restart everything, and carefully-tested demo in the taxi on my way to the site, out of the window.

The reason for the complication stems from the machine (could be VM, but applies equally on a 'real' server) using DHCP. OBIEE/FMW has multiple components, which use TCP/IP to communicate. The components will need to address each other, and so that this can work in conjunction with a DHCP-assigned IP address, a lookback adaptor is used. The loopback adaptor has a fixed IP address (such as 127.0.0.1) which never changes, and the only purpose of the loopback adaptor is to route traffic within the local machine. The requirement for and configuration of a loopback adaptor in the installation of OBIEE is well documented. However, on a machine where the DHCP-assigned IP address does change (as it can), a problem can still arise, which is discussed below.

Note that on a carefully configured and static network configuration as would be found on a typical Production server, this is a non-issue, so this blog post is more aimed at those doing sandbox work on a VM, or who are having problems configuring their instance in the first place. Bear in mind that OBIEE is an enterprise server product, it's not designed for flaky or transient network configs per se.

In a nutshell, here is the problem:

If it were working as intended then the loopback adaptor would be used for all the components' TCP/IP communication, and the changing DHCP-assigned IP address wouldn't make any difference to the functioning of the stack.

One of the places that the the IP/hostname used for internal communication is stored is in NQSConfig.ini, in the FMW_SECURITY_SERVICE_URL setting. This defines the IP or hostname that BI Server will connect to for the security service, and is what causes the failure shown above (Could not connect to the authentication web service) when the IP changes. Ideally it should be using the hostname (and thus the loopback IP).

To make it more confusing, this option is not controlled by EM (strictly speaking) as the comment implies, but actually by an internal WebLogic process .

Looking at NQSConfig.ini and instanceconfig.xml it looks like the hostname is correctly used elsewhere (for example, JAVAHOST_HOSTNAME_OR_IP_ADDRESSES is correct), so long as the hostnames file has been set up correctly (see below).

The starting point is RTFM, specifically, Installing Oracle Business Intelligence on a DHCP Host, Non-Network Host, or Multihomed Host. This redirects to Oracle Fusion Middleware System Configuration Requirements, which explains the necessity of having in place a loopback adaptor. On Windows, this needs to be installed; on Linux it's in place already. On both Linux and Windows, you need to update your hosts file (/etc/hosts or %SYSTEMROOT%\system32\drivers\etc\hosts respectively).

The manual says to put the following in your Windows hosts file, after the standard 127.0.0.1 localhost entry:

This kind of "I broke things, so now I will jiggle things randomly until they unbreak" is not acceptable.
[…]
You need to understand the difference between "understanding the problem" and "put in random values until it works on one machine".

Here are some "workarounds" that result in FMW using up the hostname rather than DHCP-assigned IP:

Options 1 and 2 are impractical - I like being able to access t'internet from within my VM (e.g. Windows Updates, etc).

Option 3 is a possibility, but I've had reasons in the past to not want to use NAT (eg you can't then access the VM from a browser or SSH on the host).

Option 4 sounds daft, but you'd be surprised how often this is actually the most practical!

Option 5 is the preferred option, and the one documented in part in the My Oracle Support entry OBIEE 11g: How To Bind Components / Ports To A Specific IP Address On Multiple Network Interface (NIC) Machines [ID 1410233.1]. For the purposes of my sanity, I only needed to fix the ListenAddress for bi_server1 and everything else worked fine, but it's worth being aware of this article in full as it also details binding each of the components within the OBIEE stack to a particular IP or hostname.

Login to the Administration Server Console (http://yourserver:7001/console normally). Click on the Servers link 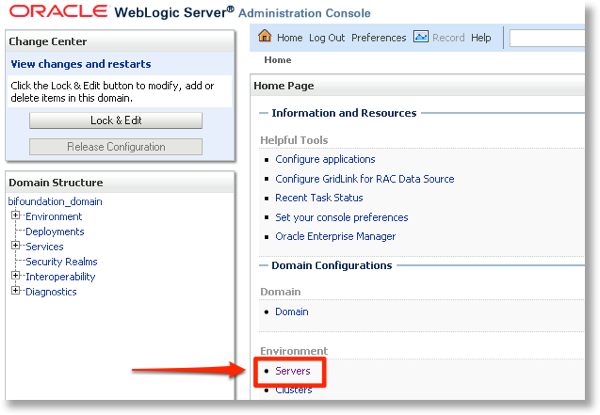 Assuming you have an Enterprise deployment, click on the managed server (bi_server1). If it's a Simple install, click on AdminServer 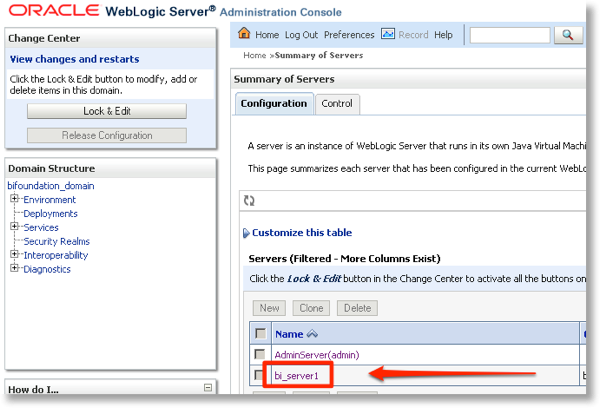 Lock and Edit the configuration, so that you can make changes to it. If you don't, the options will be greyed out and not editable. 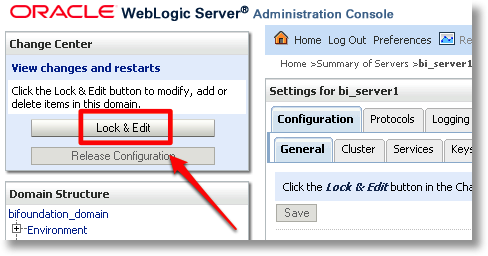 Locate Listen Address and set it to your hostname. Click on Save. 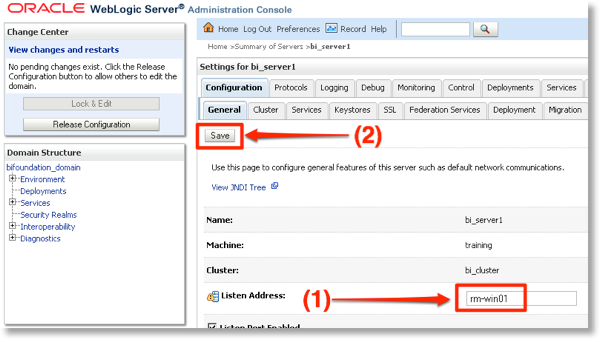 Activate your change by clicking on Activate.

Once activated, you need to restart the server (managed server, or AdminServer, depending on which you've changed the configuration of) to pick up the change. After the restart, the NQSConfig.ini file should now have the hostname under FMW_SECURITY_SERVICE_URL:

and EM shows the hostname instead of IP against the managed server:

Also note in the server log at startup instead of a message about multiple IPs, there is just the single - loopback - IP: The above example sets the Listen Address for the managed server, which seems to be sufficient for causing FMW_SECURITY_SERVICE_URL to use the hostname. It does make sense to set ListenAddress for AdminServer to the hostname too though, following the same process as above. Once done, both AdminServer and the managed server show the hostname in EM:

Too good to be true? Well, there is a small gotcha to be aware of. When you specify a Listen Address for a WebLogic server, it will only listen for (and thus respond) to traffic on the IP of that address. We can see this in the server log when we restart after configuring a Listen Address: This is fine if we are working locally on the machine, as we can use the hostname (which resolves to the loopback address, eg 10.10.10.10) for OBIEE and all is well. The problem is accessing OBIEE from a different machine. If we want to access it externally, then we obviously need the machine's external IP, which is the DHCP-assigned IP. If we haven't configured a Listen Address, then the Web Logic server listens (and responds) for traffic on all IPs it can find, which includes the DHCP-assigned IP. We can see this in the log too : So in this case we could access OBIEE on this machine from an external machine using the address http://192.168.10.86:9704/analytics. But if we try to use that address once Listen Address has been configured then it won't work, because FMW resolves the hostname given as the Listen Address into the IP for the hostname found in the hosts file - which if you've followed the documentation should be the loopback address. Therefore a request coming in on a different IP (the DHCP-assigned IP) will just be ignored - you won't get an error, because to all intents and purposes, there is no server to even respond with an error page on that address.

One way around this is to put the machine's DHCP-assigned IP in the hosts file for the hostname, but still use Listen Address. This way FMW_SECURITY_SERVICE_URL gets set correctly (to the hostname, from Listen Address) but the Web Logic server listens on the DHCP-assigned IP (which it resolves from the hosts file). If the DHCP IP changes, the host file would need to be updated.

What we're getting to here is a long way from any kind of realistic "proper" OBIEE installation, and more into the realms of sandpit environments where it's useful to know how to force things to work together but not so relevant for a Production installation on a fixed-IP server.

If you are installing OBIEE on a standalone server with a static IP, the above probably does not apply to you. Similarly, if you're using DHCP but on a machine where the assigned IP isn't going to change, you probably don't need the above information.

If you are using a machine with DHCP-assigned IP and this IP is changing - for example, a VM on a host laptop which switches between networks - then you probably want to understand the issue and consider configuring ListenAddress as described.