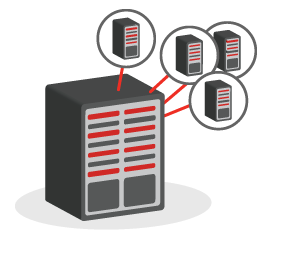 Some interesting news from Oracle around Oracle Exalytics In-Memory Machine, virtualisation and licensing. An updated version of Oracle's Partitioning Policy document has recently been released which includes a new section called "Oracle Trusted Partitions for Oracle Engineered Systems" [pdf], applying to Oracle Exalogic and Oracle Exalytics In-Memory Machine. Basically, if you use Oracle's own Oracle VM virtualisation technology along with Oracle Enterprise Manager 12c Release 2 (covered earlier this week in a previous posting), you can license Exalytics in smaller increments, giving you a way to adopt the technology without having license all 40 cores of Oracle BI Foundation and Oracle TimesTen for Exalytics.

So how does this work? Oracle Exalytics X2-4 In-Memory Machine [pdf] has four Intel Xeon E7-4800 CPUs (or sockets) inside it, each of which has 10 cores. When calculating per-processor licensing for Oracle products, these cores are multiplied by a processor core factor [pdf] which in the case of Intel Xeon E7-4xxx chips, is 0.5, so in the case of a regular Exalytics implementation the processor count is:

With this new Oracle Trusted Partitions for Oracle Engineered Systems policy, customers can license based on increments of a single CPU/socket, so that in the case of Exalytics (which as 10 cores per socket) the minimum license deal in processor terms is:

This can then be increased in 5 processor increments, based on 10 cores per CPU/socket x the 0.5 multiplication factor.

What's even more interesting is that the per-processor license cost for Oracle BI Foundation, the main software element for Exalytics, has now dropped from $450k/processor to $300k/processor [pdf], though you'll also need to factor in TimesTen for Exalytics and OEM 12cR2, if you've not already got the latter licensed elsewhere. What this means in total is that the OBIEE and Essbase element for an Exalytics implementation has now gone down from a list price outlay of 20 processors x $450k = $9m down to 5 processors x $300k = $1.2m, making it significantly less costly to get onto the Exalytics platform. These processor licenses can then be used across whatever Exalytics VMs you set up, so that one can use 6 processor licenses, another can use 4 and so on, up to your overall licensed amount.

In terms of how this is all implemented, there's an "Exalytics Base Image 2.0 for Oracle VM" template that needs to be used, with presumably OVM being installed onto the "raw iron" of the Exalytics server and then the individual Exalytics VMs running on that. OEM 12cR2 agents need to be installed on the Exalytics server to be able to communicate with the main OEM server, and there's also OVM's repository to factor in as well. Once the software is available we'll be setting our machine up that way, so watch this space for details on how Exalytics can run virtualised using Oracle VM and Oracle Enterprise Manager 12cR2