This week is Oracle Openworld week in San Francisco, USA, with around 50,000 attendees attending Openworld itself, Java One and fringe events such as Oaktable world. Rittman Mead have had ten sessions during the week, covering topics such as OBIEE, Endeca, data warehousing, Essbase and EPM, Exalyics and Oracle Advanced Analytics, with links to our presentation downloads below (links will be added as presentations are given):

It's also a good opportunity for us to attend the various product roadmap sessions, talk to the product managers and catch-up with our friends and colleagues in the industry. Jon Mead posted an update earlier in the week on the first few days, but what I'd like to go through in this posting is some of the product news from the week, focusing on OBIEE, Endeca, Data Integrator and the BI Applications. 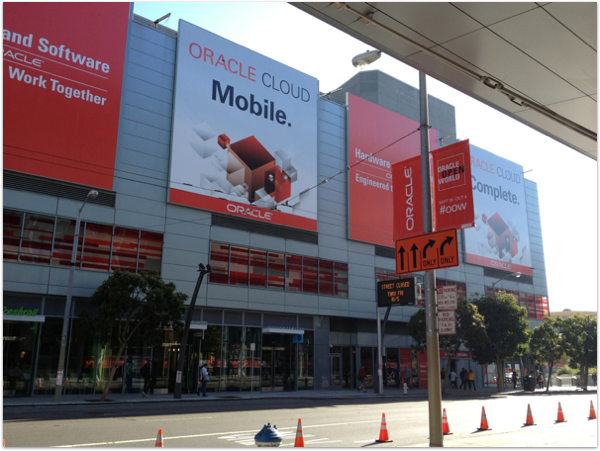 Before we get onto those products though, the major non-BI news this week was around Oracle Database 12c, Oracle Exadata X3 Database In-Memory Machine, and Oracle Public Cloud. Many people (including myself) were expecting Oracle to formally announce and launch Database 12c this week, but it's been a sort-of strange "non-launch" this week with the product described in a fair bit of detail, but not formally launched with the accompanying white papers on oracle.com, detailed articles on their website and so forth. In fact, formally launching a product in that way creates a number of obligations to release the product within a certain timeframe, so by announcing but not launching the product Oracle can get the (expected) word out whilst giving themselves a bit more latitude around when the product actually becomes available. In terms of the database and in particular data warehousing new features, some ones that were called out were:

The big news though was around Oracle Exadata X3 Database "In-Memory Machine". The idea here is that X3 is an update to Oracle's database "engineered system" line with, this time around, 26TB of RAM on a full-rack machine and the overall product positioned as an "in-memory" database server, with disk being used to supplement the main memory store. Whilst this is certainly impressive and not to be sniffed at, it's slightly disingenuous to call it an "in-memory" database as only 4TB of the overall 26TB of memory is DRAM, with the rest being flash memory - a bit like RAM on your laptop compared to memory in a USB memory stick. Each server within the overall Exadata rack has one eighth of this total memory, meaning that a typical Exadata server has 1/2 TB of RAM (plus all the flash memory) compared to 1TB of RAM for an Exalytics server (and no flash memory). So we won't be going looking for a refund on our Exalytics server yet (of which there was no real news about an Exalytics v2) but certainly it'll be one more product to compete against SAP Hana with, and if someone gave us one for free we'd certainly be all over it. But not quite 26TB of RAM as you'd normally think of it, and you still need Exalytics for hosting TimesTen and Essbase. 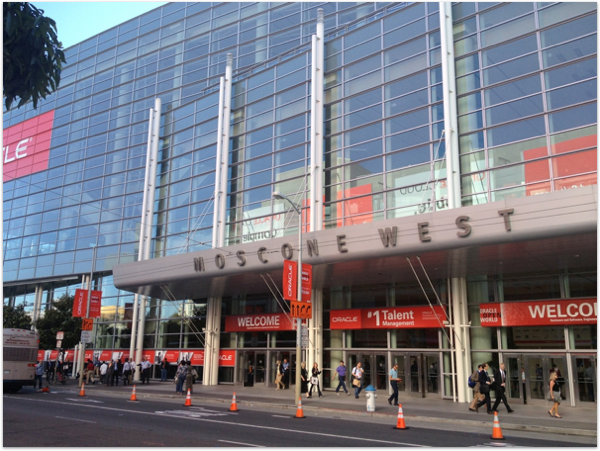 So on to OBIEE, Endeca and Advanced Analytics. Versions 11.1.1.7 and 11.1.1.8 were talked about at the BI Roadmap & Strategy talk, with 11.1.1.7 likely to feature installation within IBM WebSphere as an option, and with new visualisations coming along such as:

BI Mobile was talked about, with the 11.1.1.6.2 BP1 "BI Mobile HD" version being showcased and talk about more specialised, job-specific mobile applications called "BI Mobile Solutions" that take elements of Oracle BI Mobile and embed it in function-specific, pre-built applications (including Windows Mobile and Android) apps. Nothing on dates or how these products would be distributed, but coupled with an announcement in a separate session about making the BI Mobile application available as a static library for embedding in security wrappers provided by the likes of Bitzer Mobile, it seems likely that Oracle are focusing on mobile as a first-class delivery platform for BI and looking to address some of the remaining shortcomings of their more general purpose BI Mobile app.

The other major announcement for OBIEE was around SmartView replacing BI Office as OBIEE's MS Office client. BI Office has been lacking for a while now whilst SmartView, though technically compatible with OBIEE wasn't really suitable as a replacement for BI Office. OBIEE 11.1.1.7 looks likely to introduce an updated version of SmartView that will support migration from BI Office, and will work as an Office front-end for both OBIEE and the Hyperion Tools, covering MS Word, MS Excel and MS Powerpoint. Should be interesting to see when it comes out.

Endeca and the BI Apps also go their own mention and, in the case of BI Apps, roadmap presentation. No real new news on either product (we covered the BI Apps product roadmap in a three-part series earlier in the year, available here, here and here) but it was good to hear Florian Schouten talk about where the BI Apps user interface is going post 11g, and to hear the search/discovery and unstructured analytics message getting out to the audience for Endeca. R, and Oracle R Enterprise also got a mention at many sessions, and I'm looking forward to delivering my combined OBIEE / Endeca and Oracle R Enterprise on Exalytics talk at Openworld later today. So positive words and lots around visualisations for Oracle's BI tools at Openworld.

My other main interest for this year's Openworld was around data integration, big data and advanced analytics, and in several sessions Oracle's big data strategy was set out similar to the diagram below. 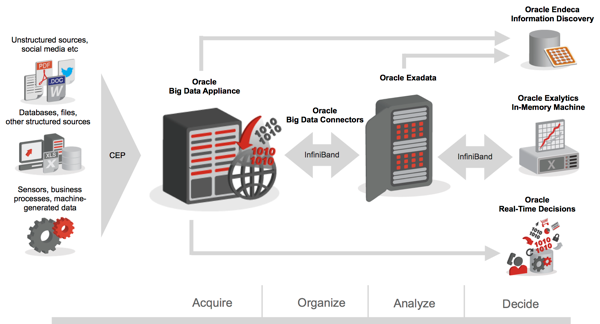 Key elements here that may not be apparent to readers immersed in the "big data" story include:

Big Data Connectors are a key part also of Oracle's Data Integration strategy, with ODI providing the link between Big Data Appliance and Exadata, and in-general moving and orchestrating data across the whole Oracle product stack, in a process Oracle have termed "fast data".

The ODI product roadmap and futures session covered the use of ODI with big data and went through some of the release themes for future versions of the product, which look likely to pan out like this:

ODI 11.1.1.7 is also likely to be the release that the BI Apps team will use to extend ETL support to this product, a topic again at I covered in my BI Apps roadmap postings earlier in the year. ODI 12c is going to be the most significant release, with the concept of interfaces going away an instead an OWB-style approach being used where mappings can contain multiple steps, objects like variables will appear in the mapping and be configurable using the mapping UI, and many of the concepts used in OWB brought across to ODI. Expect more details once 2013 comes along, and also details on how optional migration from OWB will become available as a feature within the tool.

So that's in in terms of updates from me, with the time now 10.45am on the Wednesday and my last presentation, on Exalytics and Big Data Analytics, due at 5pm later today. Have a safe journey home if you're also over in San Francisco, and expect a posting from me in the next few days on using OBIEE, Endeca and Oracle R Enterprise on the Exalytics platform based on today's talk.

After what has been around five years of development, including two years of waiting for OBIEE11g and then three…