In my previous posting in this series, I looked at the new 11.1.1..7.1 release of the Oracle BI Applications at a high-level, and talked about how this new release uses ODI as the embedded ETL tool instead of Informatica PowerCenter. Support for Informatica will come with patch set 2 (PS2) of BI Apps 11.1.1.7.x giving customers the choice of which ETL to use (with the caveat that customers upgrading from 7.9.x will typically have to stick with Informatica unless they want to completely re-implement using ODI), but for this initial release at least, ODI and some new Fusion Middleware tools take over from Informatica and the DAC, giving us what could well be a much simpler architecture for supplying the underlying data for the BI Apps dashboards.

In this posting then, I'm going to take a closer look at this new product architecture, and I'll follow it with a more detailed look at how the various bits of ODI functionality replace the workflows, mappings, transformation operators and execution plans provided in earlier releases by Informatica and the DAC. For anyone familiar with the previous, 7.9.x versions of the BI Applications, the architecture diagram below shows the five tiers that this product typically implemented; tiers for the source data and data warehouse/repository databases, an ETL tier for Informatica and the DAC server, then two more tiers for the OBIEE application server and the client web browser. 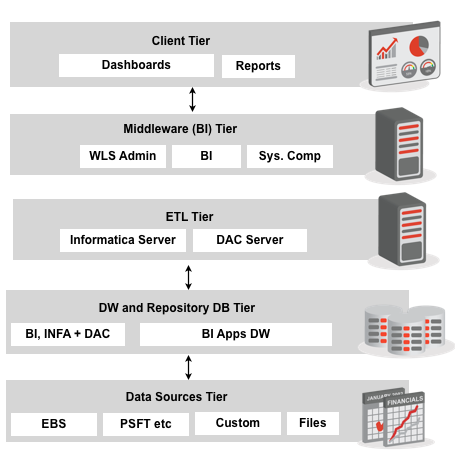 Communication between the tiers was - to put it politely - "loosely coupled", with DAC task names corresponding with Informatica workflow names, each workflow containing a single mapping, and all of the connections and sources having to be named "just so", so that every part of the stack could communicate with all the others. It worked, but it was a lot of work to implement and configure, and once it was up and running in most cases customers were scared to then change it, in case a name or a connection got out of sync and everything then stopped working. Plus - Informatica skills are scarce in the Oracle world, and the DAC is an extra piece of technology that few DBAs really understood properly.

The 11.1.1.7.1 release of the BI Apps simplifies this architecture by removing the separate ETL tier, and instead using Oracle Data Integrator as the embedded ETL tool, with its server functions running as JEE applications within the same WebLogic domain as OBIEE 11g, giving us the overall architecture in the diagram below. 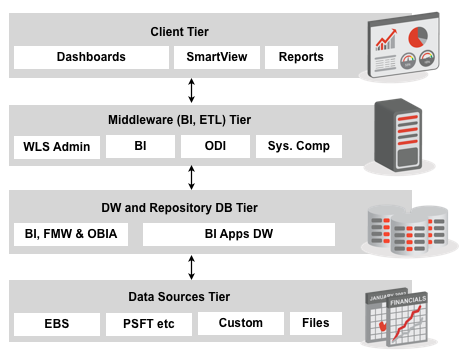 Now anyone who read my series of posts back in 2009 on the 7.9.5.2 release of the BI Apps, which also used ODI as the embedded ETL tool, will know that whilst ODI 10g could do the job of loading data into the BI Apps data warehouse, it lacked the load orchestration capabilities of Informatica and the DAC and wasn't really set up to dynamically generate what have become, in ODI 11g, load plans. BI Apps 7.9.5.2 turned-out to be a one-off release and in the intervening years Oracle have added the aforementioned load plans along with other functionality aimed at better supporting the BI Apps, along with two new JEE applications that run in WebLogic to replace the old DAC.  These new applications, along with the ODI JEE agent, ODI Console and the ODI SDK, are shown in the more detailed BI Applications 11.1.1.7.1 logical architecture diagram shown below. 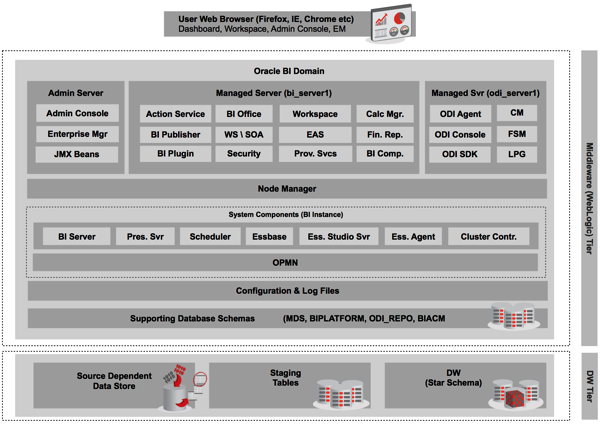 Oracle BI Applications 11.1.1.7.1 has two main product tiers to it, made up of the following components:

Essbase at this stage is installed, but not used for the main BI applications, and all of it uses Fusion Middleware security (application roles and policies) along with the WebLogic Embedded LDAP server to hold users and groups. A special version of RCU is used to set up the new BI Apps-related schemas, and import data into them using Oracle database export files, so that the ODI repository, metadata tables and so forth are all populated prior to the first load taking place. Enterprise Manager Fusion Middleware Control is still used to manage and monitor the overall platform, but there's now an entry for ODI along with Essbase, the latter of course being delivered as part of the 11.1.1.7 OBIEE platform release. 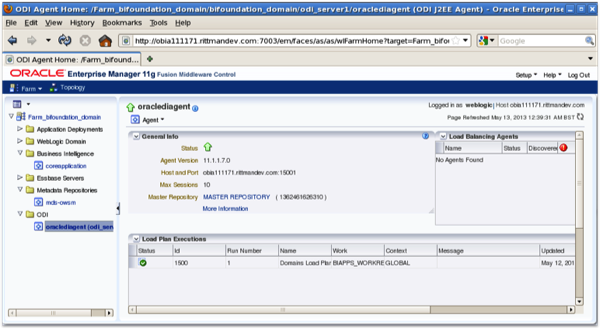 After you install OBIEE 11.1.1.7 and then the BI Applications 11.1.1.7.1, the BI Apps installer extends the BI domain to include FSM, BIACM and the ODI Load Plan Generator, along with some other supporting applications and libraries required for the full product. Load Plan Generator works behind the scenes to build new load plans in a similar way to the Execution Plan "Build" feature in the DAC, and the two web-based tools perform the following functions:

Most importantly though, these tools connect directly through to the ODI repository, so data sources you set up here will get pushed down to ODI as data servers in the ODI master repository; load plans you set up to, as in the screenshot below, load configuration tables, are ODI load plans and you can track their progress either from within ODI, or from within these applications themselves. 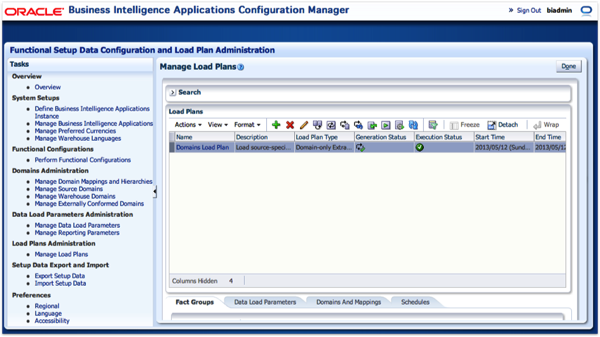 I haven't had a chance to properly "diff" the RPD used in BI Apps 11.1.1.7.1 with the previous 7.9.x ones, or do a similar exercise for the underlying database data model, but on first glance the new RPD is at least recognisable, albeit with new sources and subject areas for the Fusion Apps, Oracle Transactional BI (OTBI), Real-Time Decisions and the like. The web catalog also looks familiar, but also has new content around the new applications along with additional content for the existing ones. 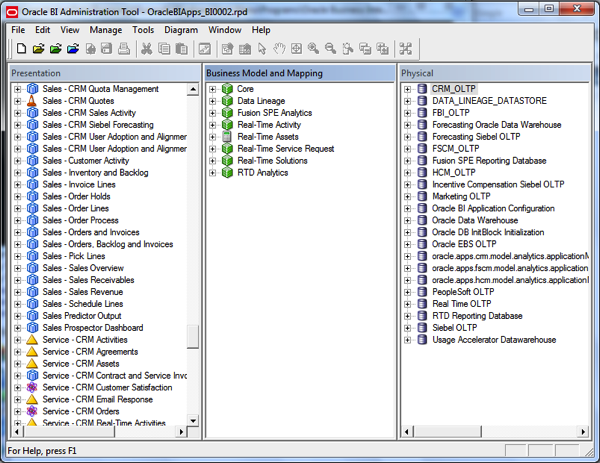 So, we're at the point now where can start to think about loading data into the BI Apps data warehouse, and in tomorrows post we'll take a look at what's involved in a BI Apps 11.1.1.7.1 ETL load, and also look into how GoldenGate can now be used to extract and stage data prior to loading via ODI. Back tomorrow...

Agenda and Details for the Atlanta RM BI Forum 2013

Well, Brighton is now a wrap and we're all now over in Atlanta, getting ready for the second leg…