In the two previous postings in this series on the Oracle BI Apps 11.1.1.7.1, we looked at the release at a high-level, and then at the product architecture including the new configuration and functional setup tools. From a technology and developer perspective though probably the most interesting thing about this new release is its use of Oracle Data Integrator as the ETL tool rather than Informatica, and the doing-away with the DAC for load orchestration and monitoring.

This introduction of ODI brings a number of potential benefits to customers and developers and gives Oracle the opportunity to simplify the product architecture, but bear in mind that there's no migration path from the earlier 7.9.x releases to this version, with Informatica customers instead having to wait until the "patch set 2" version due in the next twelve months; even then, migration between tools won't be automatic, with existing Informatica-based installations expected to stay on Informatica unless they choose to re-implement using ODI.

So how does ODI work within this new release, and how has the DAC been replaced? Let's take a look in this final piece in our short series on Oracle BI Apps 11.1.1.7.1, starting by looking at the overall role that ODI plays in the platform architecture. 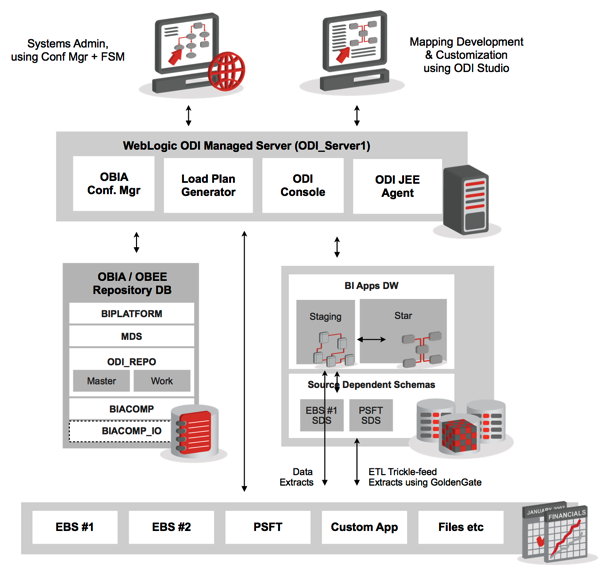 Existing ODI developers will know that the tool uses two repositories, known as the Master and Work repositories, to store details of data sources and targets, mappings, data models and other aspects of an ETL project. Within the BI Apps these two repositories are stored in a schema called prefix_ODI_REPO, for example DEV_ODI_REPO, and are accompanied by a new schema called prefix_BIACOMP, again for example DEV_BIACOMP. The BIACOMP schema contains tables used by the various new WebLogic-based BI Apps supporting applications, and contain details of the functional setup of the BI Apps, load plans that have been generated and so forth. There's also another schema called prefix_BIACOMP_IO which is used for read-write access to the BIACOMP schema, and all of these are held in a repository database alongside the usual schemas used for OBIEE, MDS and so forth.

The major difference in using ODI within this environment is that it's treated as an "embedded" ETL tool, so that in most circumstances you won't need to use ODI Studio itself to kick-off load plans, monitor their execution, set up sources and targets and so forth. This was the original vision for Informatica within the original BI Apps, but Oracle are able to do this far more effectively with ODI as they own all parts of the tech stack, can alter ODI to make it easier to embed, they'e got control over ODI's various metadata APIs and so forth. What this means in practice is that the setup of the ODI topology (to connect to the ERP sources, and the target data warehouse) is done for you via a web-based application called the Oracle BI Applications Configuration Manager, and you can kick-off and then monitor your running ETL jobs from Configuration Manager and from ODI Console, the web-based operator tool that's been around since the 11g release of ODI. The screenshot below shows Configuration Manager setting up the source database ODI topology entry, with the details that you provide then being pushed through to the ODI master repository: 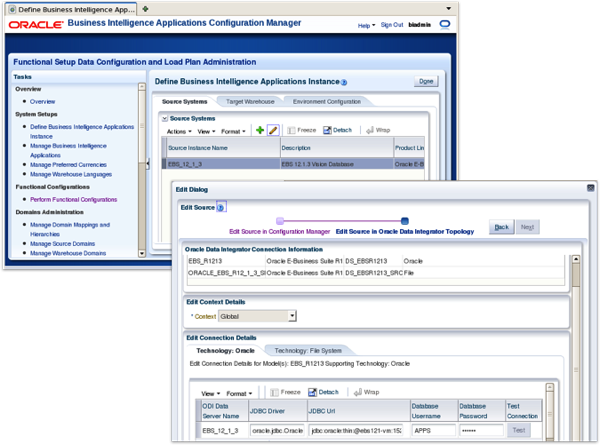 Setting up a new BI Apps system involves using the Configuration Manager to define the connections through to the various source systems, then select the BI Apps modules (Financial Analytics, for example, and then the various subject areas within it) that you wish to implement. There are then a number of steps you can perform to set up system-wide settings, for example to select default currencies or languages, and then you come to run your first ODI load plan - which in this instance copies settings from your source system into the relevant tables in the BIACOMP schema, performing automatically the task that you had to do via the various domain configuration spreadsheets in the earlier 7.9.x releases - the screenshot below shows this ODI load plan listed out and having run successfully. 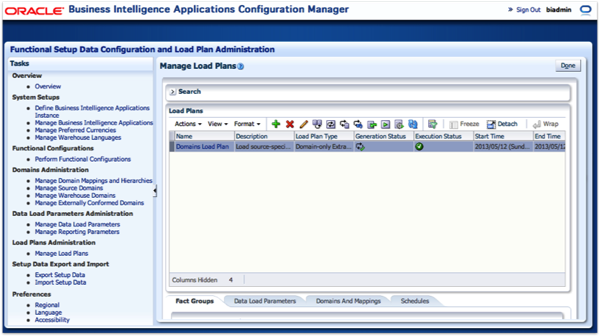 You can then view the execution steps and outcome either in ODI Console (embedded within Configuration Manager), or over at ODI Studio, using the Operator navigator. 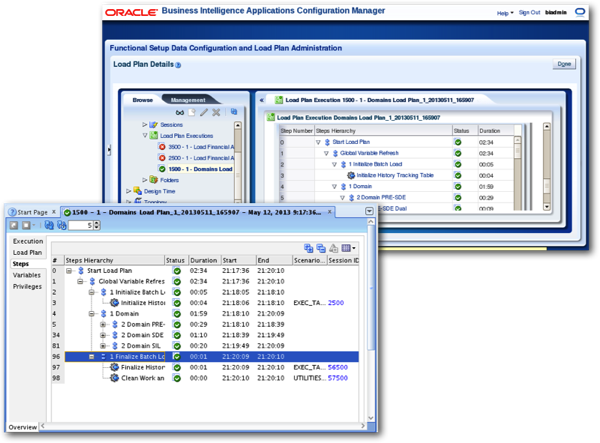 Moving over to ODI Studio, the folders (or "adapters") that in Informatica used to hold workflows and mappings for the various source systems, are contained with the BI Apps project within the Work repository and the Designer navigator. In the screenshot below you can also see the Fusion Apps adapter that's not supported in this particular release, and the ETL Data Lineage adapter that should get enabled in an upcoming patch release. 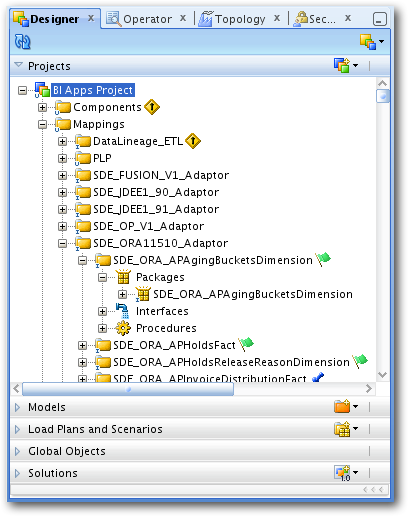 In the screenshot above you can also see one of the loading tasks, SDE_ORA_APAgingBucketsDimenson, is a package that (were you to expand the Interfaces entry) makes reference to a regular, and also a temporary, interface. 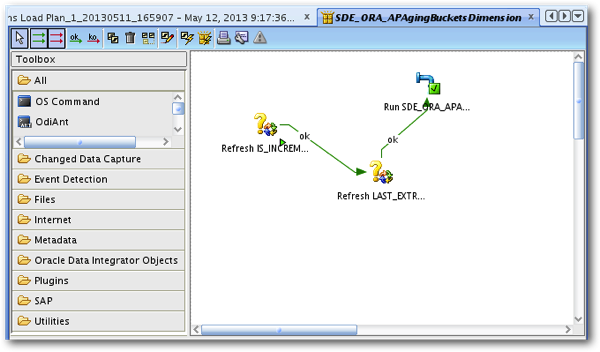 Packages in ODI perform the same role as Informatica workflows in earlier releases of the BI Apps, and each package runs some steps to refresh variables, work out if its doing a full or incremental load, and then call the relevant ODI interface. Interfaces in ODI for the BI Apps typically load from other temporary interfaces, with these temporary interfaces performing the role of maplets in the Informatica version of the BI Apps, as you can see in the screenshot on the left below. On the right, you can see the flow for another mapping, along with one of the custom KMs that come as part of the BI Apps 11.1.1.7.1 package. 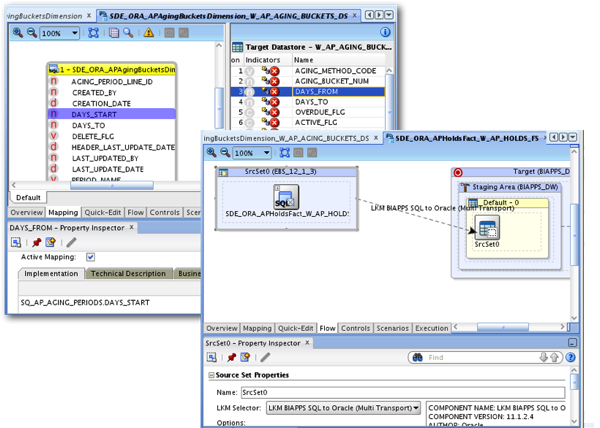 Individual packages are then assembled into the equivalent of BI Apps 7.9.x "execution plans" through a new JEE application called the Load Plan Generator, which also gets installed into ODI Studio as a plug-in so you can develop new data loading routines away from the full production setup. As you can see in the final screenshot below, these load plans are then visible from within ODI Studio (whether you generated them there, or from Configuration Manager), and like all ODI 11g load plans you can view the outcome of each load plan instance run, restart it if this feature is enabled, and so forth. 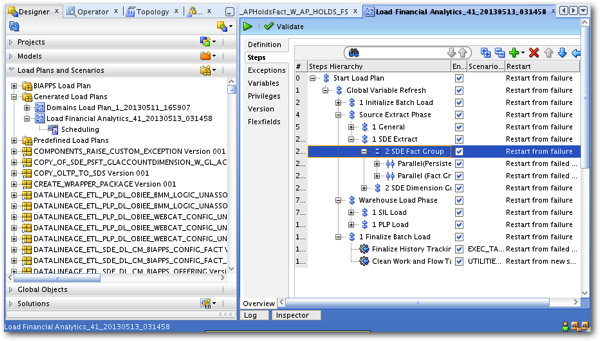 So there you have it - how ODI is used within the BI Apps 11.1.1.7.1. I'm going to take a break now as it's almost time for the Atlanta run of the Rittman Mead BI Forum 2013, but once I'm back in the UK I'll try and put something together for the blog on pulling together your first ETL run. Until then - have fun with the release.

One of OBIEE’s many great strengths is aggregate navigation; the ability to choose from a list of possible…

Agenda and Details for the Atlanta RM BI Forum 2013

Well, Brighton is now a wrap and we're all now over in Atlanta, getting ready for the second leg…