Here at RittmanMead we’re big fans of working smarter, not harder. One of the ways we do this is not re-inventing the wheel. There’s only so many ways that products such as OBI and ODI can be implemented, and we’ve probably seen most of them. The corollary of this is that we have a large number of useful and reusable scripts that we use on a regular basis .

Another part of working smarter is the use of a good VCS (Version Control System). Stewart has already been preaching the good word over at his git and OBIEE series, and needless to say we use git for looking after our scripts too.

Today we’re opening up our scripts git repository, making several of our scripts available to the OBIEE and ODI community. You can find it on github here, or clone it directly using the URL in your git client, or from the commandline:

Obviously, we’re holding a few gems back, after all, we’ve all got to eat right? But we’d like to see community participation in the repository, so go ahead and use it, fork it and make improvements, add your own scripts, and submit a pull request to merge them back in to share with the community again. To keep track of what's going on and when new scripts are added, you can watch it on github.

Hopefully it goes without saying, all the content in the repository is provided without warranty, etc etc, don’t blame us if your OBIEE server spontaneously combusts or starts dancing on one leg. The scripts will have been tested and known to work (usually on Oracle Linux), but may need amending to work on your particular OS. If you can fix scripts to run on your OS, please go ahead and submit a pull request!

Also – the material is available to all, that’s why we’re making it public – but it would be good form if you go on to use the scripts to keep reference back to their origin and not rip them off as your own. Not that anyone would do that.

So what’s in the goodie bag?

It’s not quite gold-plated, but it certainly has had some polish compared to the usual scripts that I’ve found for this purpose to date.

The script will automagically run OBIEE at startup, shut it down when the server is shutdown, and gives you access to a status command that probes the status of it to determine whether it’s up or not. It supports multiple installations of OBIEE on a server, and requires minimal configuration.

The difference between this script and others is that instead of just looking for a running service, or polling a log file for a particular string, it looks at the processes, the network ports, each of the opmn-managed processes, and even whether /analytics is accessible.

The script also handles timeouts for the components, which is important when using it as part of a server shutdown routine. If a process takes too long (quite how long is customisable) shutting down, it will be killed so that the server shutdown doesn’t hang. 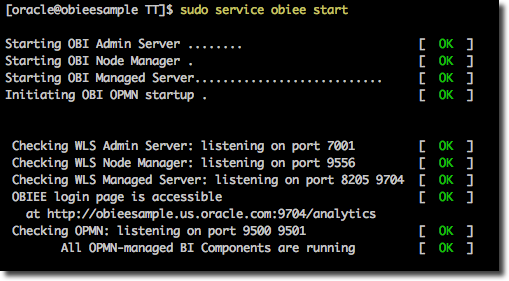 The configuration required is minimal; just the FMW_HOME (where OBIEE is installed), and optionally where you want log files written and under which user to run OBIEE. If you haven't already, you'll want to configure boot.properties so that you're not prompted for credentials each time you start/stop WebLogic.

You’ll find the script in obi/init.d/obiee with full details on how to set it up and use it in the associated README.md

Put your OBIEE sysadmin skills to the test with this nifty little script. Set it up with your FMW_HOME details (no peeking at the rest of the script!) and then run it. It will take a random action that breaks something on your OBIEE system, and it’s your job to figure out what.

Hopefully it’s not necessary to say, don’t run this on your Production OBIEE server!

Bonus Tip: Use service obiee status enabled by the script above to make your life easier in diagnosing OBIEE problems!

A hotchpotch of WLST scripts to make the OBIEE sysadmin’s life easier, including:

Response files to use with silent installs and upgrades of OBIEE.

Last but no means least in this list is a script by Stewart Bryson. Find out more by following the forthcoming posts in his Git and OBIEE blog series, but I will say this, it looks very useful if you're doing anything with MDS XML....