Monday's almost over at Oracle Openworld 2013 in San Francisco, and it started for me today with a presentation on Enterprise Manager 12c and the BI Management Pack, alongside Henrik Blixt (PM for the BI Management Pack) and Dhananjay Papde, author of a book on EM12c. I've covered EM12c and the BI Management Pack extensions quite a bit on the blog over the past few months so it was good to exchange a few ideas and observations with Henrik, and it was also good to meet Dhananjay, who's been working with EM for a long time and has particularly specialized in the configuration management, and SLA-monitoring parts of the app.

Similarly, I finished-up the day with another joint session this time on TimesTen for Exalytics, with Peak Indicators' Tony Heljula and Chris Jenkins, one of the TimesTen development PMs. As with all these sessions, it's the audience interaction that makes them interesting, and we had a number of excellent questions, particularly at the TimesTen one given the very interesting product announcements during the day - more on which in a moment. 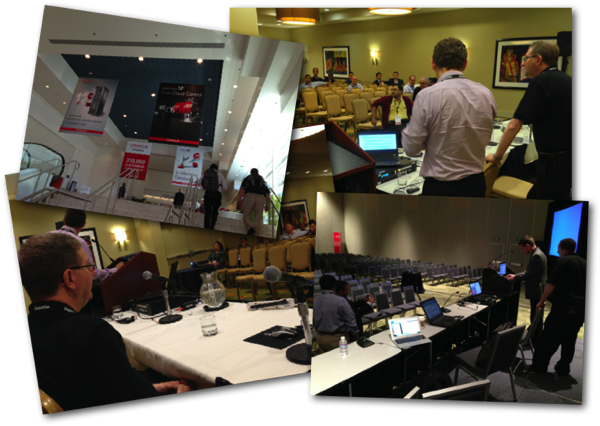 Before I get onto those though, here's the links to today's RM presentation downloads, with presentations today given by myself, Jérôme Françoisse (with Gurcan Orhan) and Venkat:

So, onto the product roadmap sessions:

The first set of announcements was around Oracle Exalytics In-Memory Machine, which started off as a Sun x86_64 server with 1TB RAM and 40 CPU cores, then recently went to 2TB and SSD disks, and now is available in a new configuration called Oracle Exalytics T5-8. This new version comes with 4TB RAM and is based on Sun SPARC T5 processes with, in this configuration, a total of 128 CPU cores, and is aimed at the BI consolidation market - customers who want to consolidate several BI applications, or BI environments, onto a single server - priced in this case around the $350k mark excluding the software.

What's also interesting is that the T5-8 will use Sun Solaris on SPARC as the OS, giving it access to Solaris' virtualisation and resource isolation technologies again positioning it as a consolidation play rather than host for a single, huge, BI application. Given the price I can't quite see us getting one yet, but it's an obvious upgrade path from the X2-3 and X2-4 servers and something you'd want to seriously consider if you're looking at setting up a "private cloud"-type server infrastructure.

The Exalytics roadmap session also previewed other potential upcoming features for OBIEE, I would imagine earmarked for Exalytics given some of the computation work that'd need to go into the background to support them, including:

Yesterday of course had the big announcement about the new In-Memory Option for Oracle Database 12c, and this of course then led to the obvious question - what about TimesTen, which up until now was Oracle's in-memory database - and what about Exalytics, where TimesTen was the central in-memory part of the core proposition? And so - given that I was on the TimesTen Birds of a Feather Panel this evening and no doubt would need to field exactly those questions, I was obviously quite keen to get along to one of the TimesTen roadmap sessions earlier in the day to hear Oracle's story around this.

And - it actually does make sense. What's happening is this:

So what about the positioning of TimesTen vs. Oracle Database In-Memory Option - does one replace the other, or do you use the two together? Oracle's ideas on this were as follows: And I think this makes sense. Of course, until we actually get hold of the two products and test them out, and see how the pace of development works out over time, we're not going to fully know which product to deploy where - and of course pricing and packaging has yet to be announced; for example, I'd strongly predict that columnar storage for TimesTen will be an Exalytics-only feature, whilst the In-Memory Option for the database might be priced more like RAC than Partitioning, or even packaged up with Partitioning and OLAP as some sort of "data warehousing option". We'll just have to wait and see.

The Essbase roadmap was the last session I managed to attend today, and again there were some pretty exciting new features announced or trailed (and it was made clear that the new features at the end of this list were more at planning or conceptual stage at the moment, and may well not make it into the product). Anyway, here's what was talked about in the session, for BI and Exalytics-type use cases:

So - lots of potential new features and a peek into what could be in the roadmap for three key OBIEE and Exalytics technologies. More tomorrow as we get to attend roadmap sessions for OBIEE in the Cloud, and ODI 12c.