That's it! The long awaited Oracle Data Integrator 12c is out!  You can find the 12.1.2 version on the ODI Downloads page and discover the new features here while it gets downloaded. The main news is surely the new flow-based paradigm and the ability to load multiple targets within the same interface... Oh no wait, we don't talk about "interfaces" anymore, it's now called "mappings"! Fantastic, ODI developers can now communicate with developers using other ETL tools using the same vocabulary. This new terminology and the flow-based paradigm also bring ODI and Oracle Warehouse Builder (OWB) closer than ever. Let's have a glance at some of the new features.

So this release brings a whole new way to develop your integration jobs. In the new logical tab of your mapping, you can drag and drop source datastores from your model as in the previous versions of ODI. But you will also have to drag your target datastores in the same canvas. 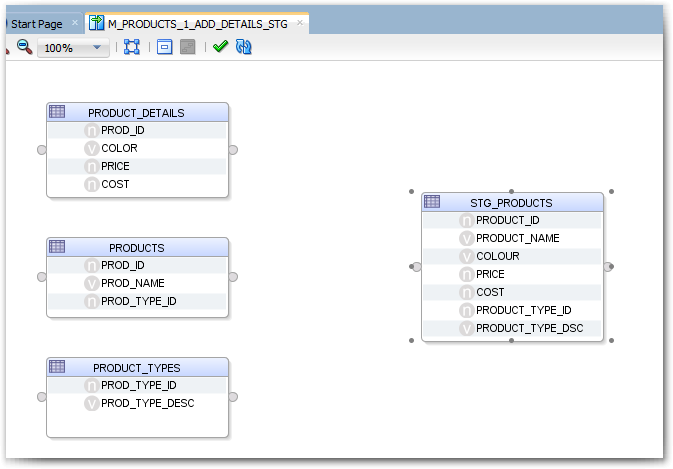 To map your source to your target and build the logic, a new "component" panel, very similar to the OWB one, has been added on the right hand side of ODI Studio. From there you can drag and drop join, filter, expression, union and lookup components into your canvas. There is even a distinct component, which means we are done with creating a yellow interface just to select distinct rows from the source. Isn't it nice? And more than that, it was announced during OOW that more components stand on the ODI roadmap. 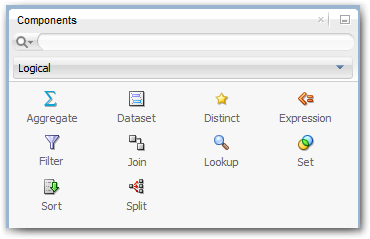 Every datastores and components have an IN and an OUT connector. Dataflows are created by dragging a connector on another one. What is interesting is that you can map an OUT connector to multiple IN connectors, and therefore load multiple targets at the same time!

<old-school>Good news for the nostalgics, it's still possible to develop a mapping using the interface-style paradigm... More information in a future post.</old-school>

The physical tab of you mapping is similar to the former flow tab of ODI 11g. That's where you can select your KMs and their options. What is interesting is that you can now have multiple physical implementations - called deployment specifications - while keeping the same business logic. You can for instance create only one mapping for both your initial and your incremental load by selecting a different IKM in each of these deployment specifications (DS) and select which one you want to use at run-time. 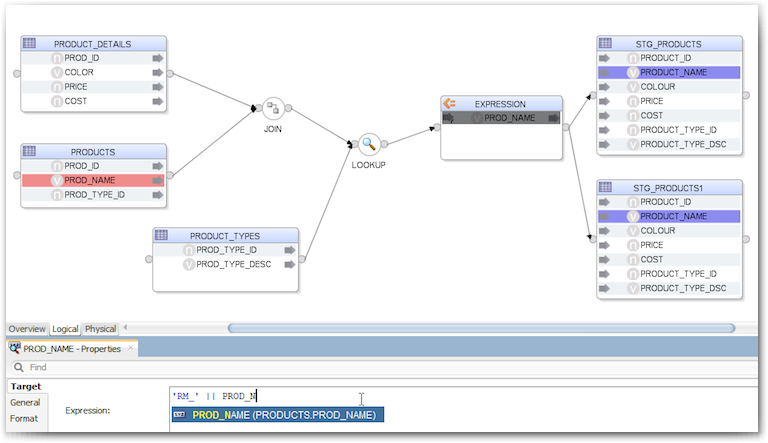 ODI 12c introduces the concept of reusable mapping, similar to those in OWB. It is designed like a standard mapping except that it use an input and/or an output signature in replacement of datastores. This allow to reuse it in multiple regular mappings by connecting these signatures to other components.

When upgrading from ODI 11g to ODI 12c, yellow (temporary) interfaces will turned on Reusable Mappings.

Instead of running a mapping, you can now also debug it from ODI Studio. A brand new pane appears where you can see the blueprints of your mapping. From there, you can set breakpoints or you can control your execution step by step. Thanks to this, it's possible review to temporary state of your data or the values of variables at every step of an execution.

What about your old OWB jobs?

ODI 12.1.2 enables the execution and monitoring of OWB jobs within ODI. A new OWB technology is now supported in the topology in order to plug the OWB repository. Once it's done you can run an OWB mapping or process flow from a package or a procedure thanks to a new ODI Tool called OdiStartOwbJob.

According to the ODI and OWB Statement of Direction, a migration utility should be available later to automatically translate some of the OWB objects in their ODI equivalent. Of course some manual work will be required as well.

Of course Part 2 is coming with other new features... Also expect a lot more to come from other Rittman Mead guys in the next few days!