We all love a good commandline utility. It gives us that warm feeling of control and puts hairs on our chests. Either that, or it means we can script the heck out of a system, automate many processes, and concentrate on more important matters.

However, some of the OBIEE commandline utilities can’t be used in Production environments at many sites because they need the credentials for OBIEE stored in a plain-text file. Passwords in plain-text are bad, mmmm’kay?

IANAC : I Am Not A Cryptographer! Nor am I a trained security professional. Always consult a security expert for the final word on security matters.

The rationale behind developing the method described below is that some some sites will have a “No Plaintext Passwords” policy which flatout prevents the use of these OBIEE utilities. However, at the same sites the use of SSH keys to enable one server to connect to another automatically is permitted. On that basis, the key-based encryption for the OBIEE credentials may therefore be considered an acceptable risk. As per Culp’s 9th law of security administration, it’s all about striking the balance between enabling functionality and mitigating risk.

The method described below I believe is a bit more secure that plaintext credentials, but it is not totally secure. It uses key based encryption to secure the previously-plaintext credentials that the OBI utility requires. This is one step better than plaintext alone, but is still not perfect. If an attacker gained access to the machine they could still decrypt the file, because the key is held on the machine without a passphrase to protect it. The risk here is that we are using security by obscurity (because the OBIEE credentials are in an encrypted file it appears secure, even though the key is held locally), and like the emperor’s new clothes, if someone takes the time to look closely enough there is still a security vulnerability.

My final point on this caveat is that you should always bear in mind that if an attacker gains access to your OBIEE machine then they will almost certainly be able to do whatever they want regardless, including decrypting the weblogic superuser credentials or reseting it to a password of their own choosing.

Two new shiny tools I’ve acquired recently and am going to put to use here are GnuPG (gpg) and mkfifo. GPG provides key-based encryption and decryption and is available by default on common Linux distributions including Oracle Linux. mkfifo is also commonly available and is a utility that creates named pipes, enabling two unreleated processes to communicate. For a detailed description and advanced usage of named pipes, see here

Setting up a secure credentials file

This is a one-time set up activity. We create a key in gpg, and then encrypt the plain text credentials file using it.

The first step is to create a gpg key, using gpg --gen-key. You need to specify a “Real name” to associate with the key, I just used “obiee”. Make sure you don’t specify a passphrase (otherwise you’ll be back in the position of passing plain text credentials around when you use this script).

To encrypt it use gpg --encrypt

Once we have our encrypted credentials file we need a way of using it with the utility it is intended for. The main thing we’re doing is making sure we don’t expose the plaintext contents. We do this using the named pipes method: 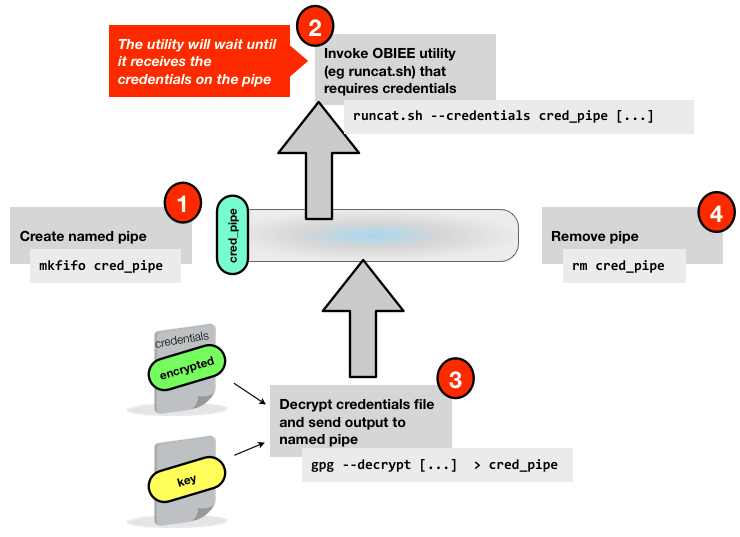 In this example I am going to show how to use the secure credentials file with runcat.sh, the Catalog Manager utility, to purge the Presentation Services cache. However it should work absolutely fine with any utility that expects credentials passed to it in a file (or stdin).

There is a three step process:

The script that will do this is as follows:

Whilst the sticking point that triggered this article was around utilities requiring whole files with credentials in, it is also common to see command line utilities that want a password passed as an argument to them. For example, nqcmd :

Let’s assume we’ve created an encrypted file containing “Password01” (using the gpg --encrypt method shown above) and saved it as password.gpg. To invoke the utility and pass across the decrypted password, there’s no need for named pipes. Instead we can just use a normal (“unnamed”) pipe to send the output straight from gpg to the target utility (nqcmd in this example), via xargs:

Tip: xargs has a --interactive option that makes it a lot easier when developing piped commands such as the above

Because there is no passphrase on the gpg key, a user who obtained access to the server would still be able to decrypt the credentials file. In many ways this is the same situation that would arise if a server was configured to use ssh-key authentication to carry out tasks or transfer files on another server.

Here are some of the utilities that the above now enables us to run more securely:

Thoughts on Running OBIEE in the Cloud : Part 1 - The BI Platform

Why ODI, DW and OBIEE Developers Should Be Interested in Hadoop

Over the past few months I’ve been posting a number of articles about Hadoop, and how you can…