In this article I’m going to look at ways to test changes that you make to OBIEE to ensure that they don’t break existing functionality. In all but the simplest IT systems it’s common for one (planned) action to inadvertently cause another (unplanned).

What IS Regression Testing?

When we make a change to a system we use functional unit tests to ensure that it does do what it is supposed to do. We should also make sure that the same changes don’t do what they’re not supposed to, that is, cause functionality already existing in the system to change behaviour. If this does happen it is known as a regression and is something we want to ensure doesn’t happen without us knowing. Some examples of regressions seen in standard OBIEE development changes include: As well as these, less common system changes can also cause regressions, for example:

The requirement for regression testing OBIEE broadly comes from two different types of change: These two requirements have the same aim - make sure nothing breaks when we make the change - but differ in ways that make how we address them important: The points in bold above are what I aim to address in this article. Regression testing OBIEE doesn’t have to mean one technique alone - it can be refined based on what we know has changed.

If you don’t regression test then you place a wager that you’ll be able to fix any problems that arise. As soon as they arise. In Production. With angry users on the phone. And the project manager screaming blue murder because their change is getting blamed for breaking everything.

This is a recipe for compounding errors upon errors, not a stable system. Testing, in all flavours, is about gaining confidence about the impact of a proposed change to a system. Functional testing reassures us that the change will do what it was designed to do. Performance testing helps us understand how a system behaves from a response time and capacity perspective. Regression testing gives us the confidence that a change, whilst doing what it ought to, isn’t going to affect something else.

The confidence in what is (and isn’t) going to happen when we deploy a change enables us to make these changes more frequently as required by the users. Instead of a long development cycle with a huge number of changes bunched in together, and one big bang test and release, we can take a more rapid, flexible, and responsive approach to development and release because we have the confidence that an individual change is going to work.

In addition to confidence in additional releases to new deployments, a good regression testing framework enables us to have confidence in making changes to long-standing big ball of mud systems. So long as we understand the relevant interfaces points in OBIEE, we can build a pass/fail test framework on top of the most complex RPD/schema.

Regression testing is easy. You pay a troop of monkeys to sit at a set of computers and run every single dashboard, build every permutation of adhoc report, and if you’ve just upgraded or patched OBIEE, go through the user interface with a fine toothed comb. After the appropriate period of several weeks, any differences they find from before your change was made is a regression. Congratulations. All you need to do now is fix the problem – and then of course, regression test your new change. So monkeys are one option, but they’re expensive (you should see the wholesale market peanut price these days), they’re not infallible (monkeys get distracted by YouTube too), and they are slow.

Better than monkeys is automated regression testing, targeted smartly at the area of OBIEE that has been changed. We will now take a look at which changes can cause regressions in which area, and from that derive a list of testing methods appropriate for each type of change made.

To understand how we can regression test OBIEE, let us look at where a regression can be detected. The following diagram illustrates the request/response flow through the components in the OBIEE stack. We can use it to see where regressions may expose themselves, and thus understand at what points we can consider testing for them.

Starting from the point of view of the actual end user: 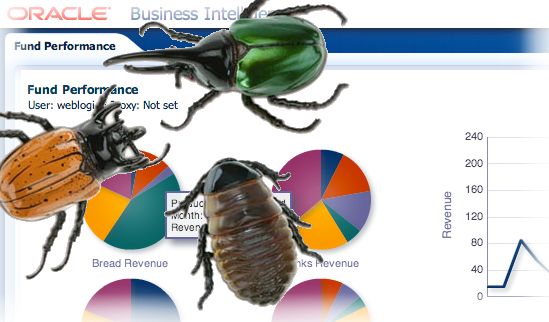 Next to consider is that each analysis sends a “Logical” SQL request to the BI Server. It is not common, but it is possible that a change to the binaries (version upgrade/patch) could introduce a regression that caused the Logical SQL to be generated incorrectly. Specific changes to the RPD can also cause the Logical SQL generation to change, potentially erroneously.

The Logical SQL that is generated is executed by the BI Server which in turn returns the requested logical resultset data. This resultset may expose a regression in how the BI Server is handling the logical request.

A “Logical” SQL request on the BI Server is parsed through the metadata layer, the RPD, and one or more “Physical” SQL statements are sent to the underlying data source(s). An error in the RPD could result in the Physical SQL being generated incorrectly. 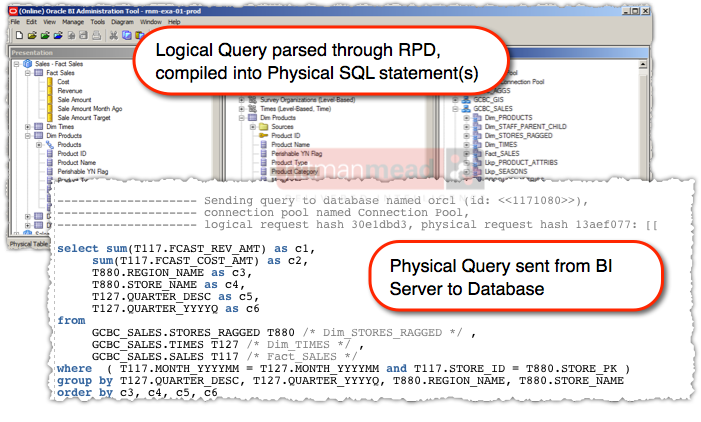 Finally, each “Physical” SQL request at the data source returns data back to the BI Server. Any errors in changes to the physical sources will show themselves through the physical query failing, or the results being incorrect.

To summarise the previous section, our testing points for regression are as follows. 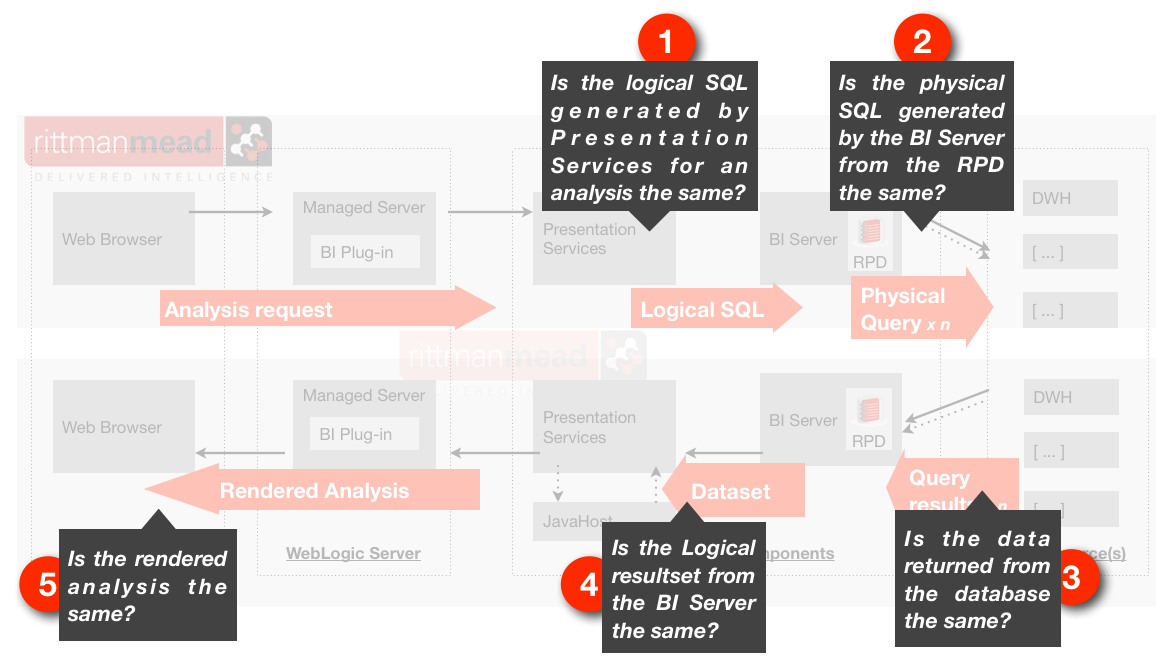 Regression testing is based around comparing one state (before a planned change) to another (after the planned change). In considering how we are going to perform our testing, let’s take a very simplistic view on what we need to test: Of these two, one is very easy to get a computer to do (and conversely, very laborious to perform manually), and the other is very difficult to explain to a computer (and relatively easy to do manually): -

The user interface for an OBIEE end user is a web browser, and OBIEE builds its web pages through a set of languages and protocols that used to be quaintly referred to as “Web 2.0”. It uses HTML, CSS, XML, and JavaScript, taking plentiful advantage of asynchronous page loading and in-flight modifications to the Document Object Model (DOM) too. AJAX is a term which certainly covers some of the magic that goes on. The resulting user interface is pretty slick with drop down menus, expanding hierarchy trees, and partial dashboard rendering as data is returned rather than waiting for all analyses to complete. All of this omits the knockout blow that is Flash, used for rendering all graph objects in OBIEE and the subject of at notable UI bug in OBIEE 11.1.1.6. The “Developer Tools” option in modern web browsers gives us a glimpse into what is going on under the covers. We can see the number of resources that go into rendering a single page... 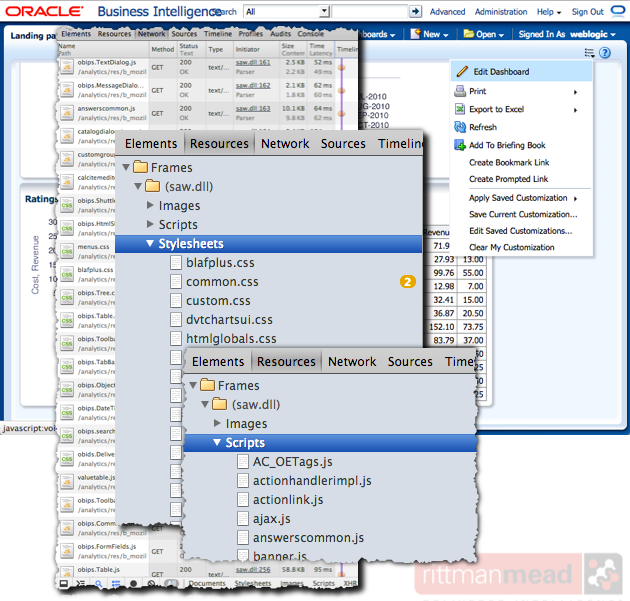 ...and how many layers there are to the object model: 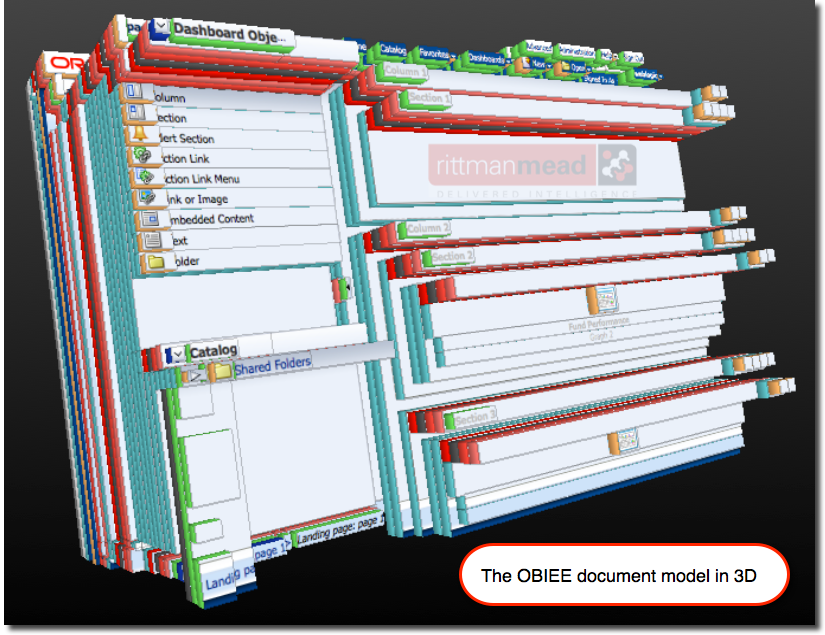 Getting a computer to interface with all of this, simulating a user interaction and parsing the response is possible with functional testing tools such as Selenium, Oracle Application Testing Suite, and HP’s QuickTest Professional. Each of these tools is capable of simulating a user (often by ‘recording’ a session as the starting point) and parsing the responses from OBIEE.

But, there is a  fundamental complication to using these tools. For all the AJAX/CSS/DOM magic to happen, the page that OBIEE generates is littered with element identifiers (so that the JavaScript code can identify the element to manipulate). For example, the following table cell has the ID in this particular execution of e_saw_14485_10_1_0_0: 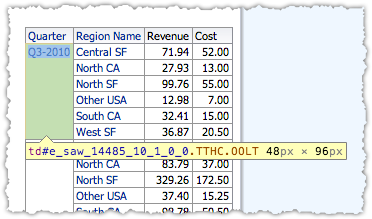 Some of these IDs may change between report executions or sessions, but either way, cannot be relied on to be consistent. Therefore, getting our testing tool (such as Selenium) to compare the before/after results to detect a regression becomes a whole heap more tricky. It is possible to work out element paths based on their relative position within the page rather than an absolute ID, but that becomes even more page specific and complex to implement. Therefore to compare a before and after page programatically we have to either or we have to The latter is going to be prone to causing false positives (i.e. failing regression tests that aren’t genuine regressions) because it relies on reverse engineering the full Document Object Model of the OBIEE page. All of this is also without even taking into account software patching and upgrades - so far as Oracle are going to be concerned how a page is rendered is their own business and thus at full liberty to completely change the internal structure of a page as they desire. Given this above complication, it becomes clear that building a test against a single page is time consuming, and it will typically be specific to that page only. This becomes a problem the greater the scale of the deployment you are trying to test. Hardcoding the testing for one specific page might be fine, but given more than a handful of pages you risk ending up with a large inflexible regression test code base (that itself may become error prone and need regression testing when it's changed...).

So, we come back to not how we test the front end but more should we, in every case? Given a finite amount of time, what are you going to get most benefit from in your regression tests? In the next post I will demonstrate one of the ways you can get the most "bang for your buck" when regression testing OBIEE, by concentrating your automation efforts on the query part of the OBIEE stack, and not the front end. Stay tuned! Many thanks to Gianni Ceresa for his thoughts and assistance on this subject.

I’ve been over in San Francisco this last week for BIWA Summit 2014, and one of the things…

It’s the Sunday before the week of the BIWA Summit 2014, San Francisco, and Rittman Mead will be…