In the previous post I introduced obi-metrics-agent, an open-source tool from Rittman Mead that can collect DMS metrics from OBIEE and write them to several formats including graphite. Graphite is a tool for storing and graphing time-based metrics.

Now in this post we will look at how to install the tools and get them up and running on your server. The install process has been tested on both OL5 and OL6 (and so by extension, Cent OS and RHEL). There's no reason why it oughtn't work on other *nixes, but it's not been tested.

I’m using Oracle’s SampleApp v309R2 server which is built on Oracle Linux (OL) 5 so that anyone can try this out at home running it on VirtualBox (or VMWare Fusion). I've also tested this on the latest SampleApp v406 - there is one additional step to run, see the paragraph below for details

There are three parts to the obi-metrics-agent installation.

Only one of these is mandatory - the installation of obi-metrics-agent itself. That in itself is just a case of cloning the repository in order to get the obi-metrics-agent python script on the server. However, the remaining articles in this blog series will assume that graphite and collectl have also been installed, so these are covered too.

Before you run this on SampleApp v309R2 (not v406), you must first run the following to fix a bug in yum's configuration. If you're not running SampleApp, you don't need to do this:

You need the EPEL yum repository setup (for packages such as git, etc):

If you are installing this on Oracle's SampleApp v406, run the following first:

If you don't do this, there is a package conflict when dependencies for py-cairo are installed that causes the whole setup to fail. The root error you'll find is:

The bulk of the installation is done by a couple of shell scripts. To get these, you should clone the git repository. The following steps will do this.

Now run the following to install git and clone the repository:

Then launch the installation:

This will install git (if not present), and create a folder called obi-metrics-agent in the installation folder of OBIEE (FMW Home). You can put obi-metrics-agent wherever you want, this locating is just a suggestion.

The installation for Graphite builds a standalone python environment using virtualenv in which graphite will run under Python 2.6. The reason for this is that OL5 ships with Python 2.4 (Noah was seen coding in this shortly before boarding his ark) and the OS' python version cannot be easily upgraded without causing all sorts of complications. Virtualenv is generally a good way to deploy python applications in isolation from others, so is also used for the OL6 version of the install.

The script will take a few minutes to run. Once complete, you can test the installation following the steps below. Do note that Graphite is somewhat notorious for installation problems, so whilst these instructions have been tested, you may hit quirks on your own server that may need a bit of Google-Fu to resolve. If you want to follow step-by-step instructions detailing each step, they are provided:

If you're on a different *nix platform then feel free to adapt the install scripts and submit a pull request. Graphite works flawlessly on Debian-based distributions, and there is no reason why you should run it local to the OBIEE server on which obi-metrics-agent is running.

First, start up the OBIEE stack and make sure that you can login to OBIEE. One it is running, you can run obi-metrics-agent by entering:

For more advanced options, including sending data to graphite, see below.

Go to http://<server>/ and you should see the Graphite launch page: 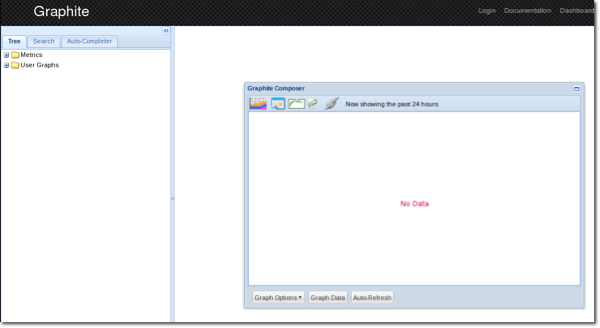 By default Graphite will collect data about its own performance, of the carbon agent. This means you can easily test that Graphite's graphs are working by selecting one of the carbon metrics to graph. Expand the Metrics tree and click cpuUsage which will add it into the graph in the main pane: 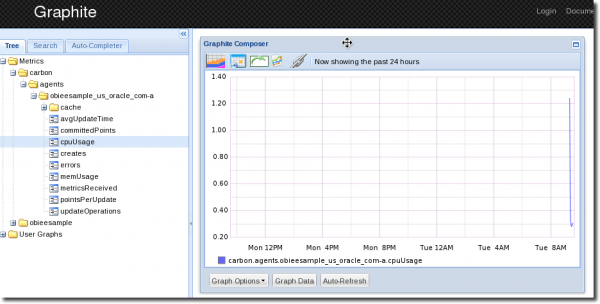 From the command line enter collectl: 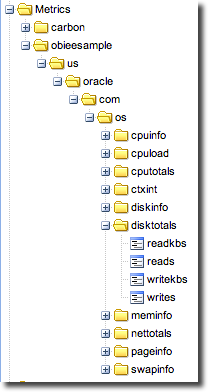 Now that we've gone through the installation, let us see how to use the three components together, graphing out some OBIEE DMS data in Graphite.

Run obi-metrics-agent.py as you did in the test above, but this time specify the output carbon and carbon-server parameters

Now go to Graphite at http://<server>/ and under Metrics you should see all of the OBIEE DMS metrics in folders. Note that it may take a couple of minutes for the metrics to first appear in Graphite. If you don't see them, or the complete list, wait a minute and then hi 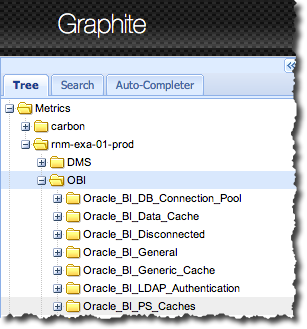 Find the metric for Presentation Services logged in sessions, Oracle_BI_PS_Sessions.Sessions_Logged_In and click on it to add it to the graph. By default the graph shows a large time period so click on the Select Recent Data icon

Set the time period to 5 minutes, and click the Auto-Refresh button at the bottom of the graph.

Now log in to OBIEE, and go back to the Graphite page - you should see that the metric has increased accordingly. 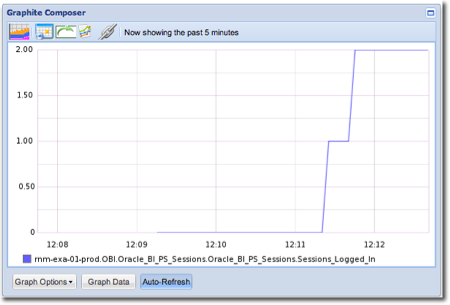 I'll look at using Graphite in detail in a later blog post; this is just to demonstrate that the collection and rendering is working.

obi-metrics-agent has three modes of operation:

For further details and syntax examples, see the USAGE.MD file in the github repository.