Understanding what is going on inside OBIEE is important for being able to diagnose issues that arise, monitor its health, and dig deep into its behaviour under stress in a load test. OBIEE exposes a set of metrics through the Dynamic Monitoring Service (DMS) and viewable through Enterprise Manager (EM) Fusion Middleware Control. EM is a great tool but doesn’t meet all requirements for accessing these metrics, primarily because it doesn’t retain any history.

obi-metrics-agent is a tool that extracts OBIEE’s performance metrics from the Dynamic Monitoring Service (DMS) functionality. Venkat wrote the original version, which I have rewritten in python and added additional functionality. It polls DMS on a specified interval and output the data to a variety of formats. It was written to aid OBIEE performance monitoring either as part of testing or longer-term use. Its features include:

How does it work?

obi-metrics-agent is written in Python, and uses the documented OPMN functionality to expose DMS metrics opmnctl metric op=query. We experimented with the WLST route but found the overhead was too great. OPMN supplies the DMS data as a large XML message, which obi-metrics-agent can either store raw, or parse out into the constituent metrics. It can write these to CSV or XML files, generate INSERT statements for sending them to a database, or send them to graphite (see below).

obi-metrics-agent can also parse previously-extracted raw data, so if you want to store data in graphite but don’t have the server to hand at execution time it can be loaded retrospectively.

On which platforms does it work?

Which OBI metrics are collected? 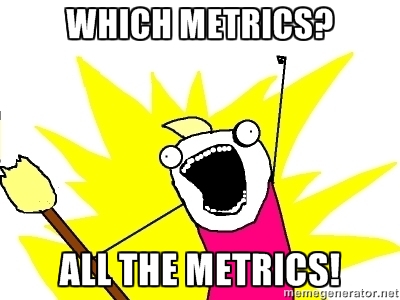 All of the ones that OPMN supports. Currently, BI Server and BI Presentation Services, plus the opmn process metrics (such as CPU time of each OBI component)

To explore the DMS metrics available, you can use Enterprise Manager, or the DMS Spy servlet that is installed by default with OBIEE and available at http://<obi-server>:7001/dms/ (assuming your AdminServer is on port 7001).

I have used DMS metrics primarily when investigating OBIEE's behaviour under stress in performance testing, but some of the higher-level metrics are useful for day-to-day monitoring too. The DMS metrics let you peer into OBIEE's workings and deduce or hypothesise the cause of behaviour you are seeing.

Sounds great, where do I get it?

Simply clone the repository and run the python script. You need to install the lxml library first - full details are supplied in the repository.

See the next blog post for a step-by-step on getting it set up and running using SampleApp v309R2 as an example server, including with Graphite and Collectl for visualising the data and collecting OS stats too.

Graphite is an open-source graphing tool that comes with a daemon called carbon that receives incoming data and stores it its own times-series database (called whisper). Graphite is a very popular tool meaning there’s lots of support out there for it and additional tools written to complement it, some of which I’ll be exploring in later blog posts. It’s also very easy to get data into graphite, and because it stores it in a time series you can then display OBIEE DMS data alongside anything else you may have - for example, OS metrics from collectl, or jmeter performance test counters. 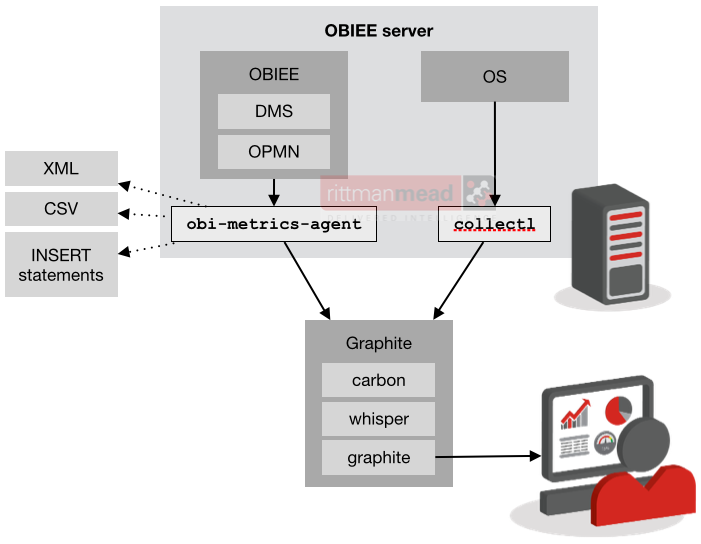 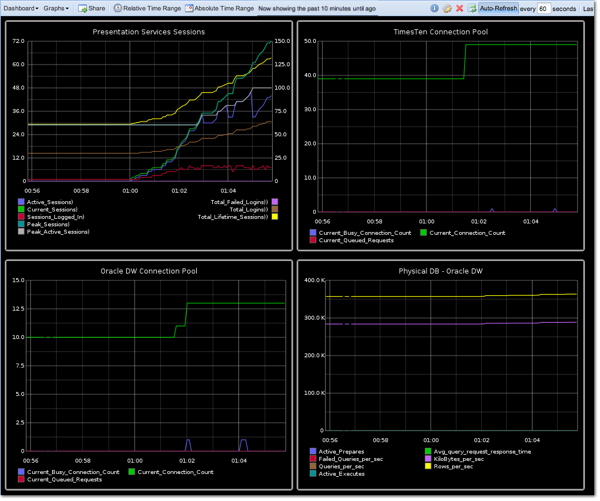 Whilst obi-metrics-agent can be used on its own and data stored to CSV for subsequent parsing, or accessing in Oracle as an external table, the focus on this and subsequent blog posts will primarily be on using obi-metrics-agent writing data to graphite and the benefits this brings when it comes to visualising it.

"Graphite?! Haven’t we got a visualisation tool already in OBIEE?"

You can graph this data out through OBIEE, if you want. The OBI metric data can be loaded in by external table from the CSV files, or using the generated INSERT statements.

The benefit of using Graphite is twofold:

Graphite just works very well in this particular scenario, which is why I use it….YMMV.

There are several obvious features that could be added so do please feel free to fork the repository and submit your own pull requests! Ideas include:

Prior to OBIEE 11.1.1.7, there was a bug in the opmn process which causes corrupt XML sometimes. This could sometimes be as much as 15% of samples. On corrupt samples, the datapoint is just dropped.

There are several posts on this has subject to come, including :