The other week I posted an article on the blog about Oracle R Advanced Analytics for Hadoop, part of Oracle’s Big Data Connectors and used for running certain types of R analysis over a Hadoop cluster. ORAAH lets you move data in and out of HDFS and Hive and into in-memory R data frames, and gives you the ability to create Hadoop MapReduce jobs but using R commands and syntax. If you’re looking to use R to analyse, prepare and explore your data, and you’ve got access to a large Hadoop cluster, ORAAH is a useful way to go beyond the normal memory constraints of R running on your laptop.

But what if the data you want to analyse is currently in an Oracle database? You can export the relevant tables to flat files and then import them into HDFS, or you can use a tools such as sqoop to copy the data directly into HDFS and Hive tables. Another option you could consider though is to run your R analysis directly on the database tables, avoiding the need to move data around and taking advantage of the scalability of your Oracle database - which is where Oracle R Enterprise comes in.

Oracle R Enterprise is part of the Oracle Database Enterprise Edition “Advanced Analytics Option”, so it’s licensed separately to ORAAH and the Big Data Connectors. What it gives you is three things:

Where this gets interesting for us is that the ORE transparency layer makes it simple to move data in and out of the Oracle Database, but more importantly it allows us to use database tables and views as R "ore.frames" - proxies for “data frames”, the equivalent to database tables in R and the basic data set that R commands work on. Going down this route avoids the need to export the data we’re interesting out of the Oracle Database, with the ORE transparency layer converting most R function calls to Oracle Database SQL ones - meaning that we can use the data analyst-friendly R language whilst using Oracle under the covers for the heavy lifting.

There’s more to ORE than just the transparency layer, but let’s take a look at how you might use ORE and this feature, using the same “flight delays” dataset I used in my post a couple of months ago on Hadoop, Hive and Impala. We’ll use the OBIEE 11.1.1.7.1 SampleApp v309R2 that you can download from OTN as it’s got Oracle R Enterprise already installed, although you’ll need to follow step 10 in the accompanying deployment guide to install the R packages that Oracle couldn’t distribute along with SampleApp.

In the following examples, we’ll:

Let’s start off them by starting the R console and connecting to the database schema containing the flight delays data.

Note that “library(ORE)” loads up the Oracle R Enterprise R libraries, and “ore.connect” connects the R session to the relevant Oracle database.

I then synchronise R’s view of the objects in this database schema with its own metadata views, list out what tables are available to us in that schema, and attach that schema to my R session so I can manipulate them from there.

Now although we know these objects as database tables, what ORE does is present them to R as “data frames” using ore.frame as a proxy, the fundamental data structure in R that looks just like a table in the relational database world. Behind the scenes though, ORE maps these data frames to the underlying Oracle structures using the ore.frame proxy, and turns R commands into SQL function calls including a bunch of new ones added specifically for ORE. Note that this is conceptually different to Oracle R Advanced Analytics for Hadoop, which doesn’t map (or overload) standard R functions to their Hadoop (MapReduce or Hive) equivalent - it instead gives you a set of new R functions that you can use to create MapReduce jobs, which you can then submit to a Hadoop cluster for processing, giving you a more R-native way of creating MapReduce jobs; ORE in-contrast tries to map all of R functionality to Oracle database functions, allowing you to run normal R sessions but with Oracle Database allowing you process bigger R queries closer to the data.

Let’s use another two R commands to see how it views the PERFORMANCE table in the flight delays data set, and get some basic sizing metrics.

Now at this point I could pull the data from one of those tables directly into an in-memory R data frame, like this:

As you see, R sees the UNIQUE_CARRIERS object as an ore.frame, whilst carriers (into which data from UNIQUE_CARRIERS was loaded) is a regular data.frame object. In some cases you might want to load data from Oracle tables into a regular data.frame, but what’s interesting here is that we can work directly with ore.frame objects and let the Oracle database do the hard work. So let’s get to work on the PERFORMANCE ore.frame object and do some initial analysis and investigation.

In the above set of scripts, I first aggregate flights by destination airports, then count flights by day of week. In the final set of commands I get a bit more advanced and create a box plot graph showing the range of flight delays by airline, which produces the following graph from the R console: 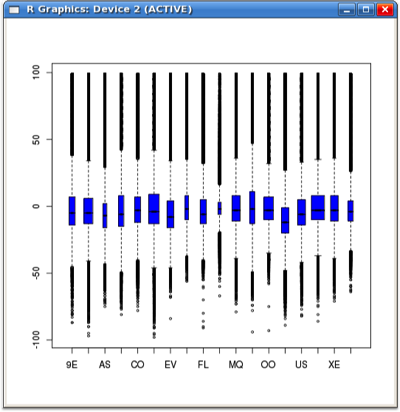 whereas in the next one I create a histogram of flight delays (minutes), showing the vast majority of delays are just a few minutes. 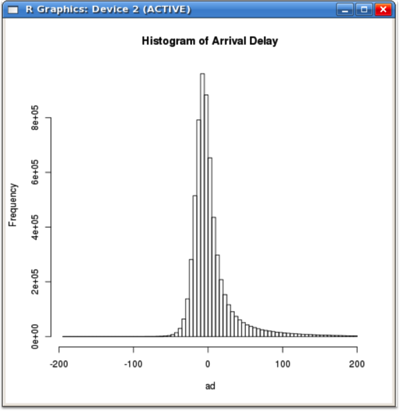 All of this so far, to be fair, you could do just as easily in SQL or in a tool like Excel, but they’re the sort of commands an R analyst would want to run before getting onto the interesting stuff, and it’s great that they could now do this on the full dataset in an Oracle database, not just on what they can pull into memory on their laptop. Let’s do something more interesting now, and answer the question “which day of the week is best for flying out, in terms of not hitting delays?" 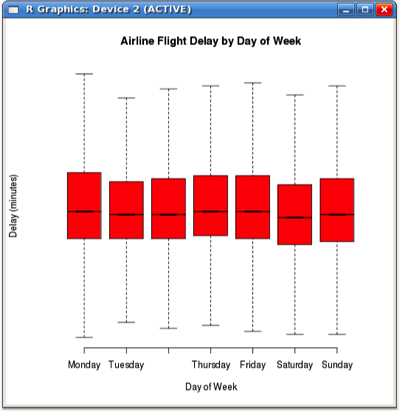 Looks like Tuesday’s the best. So how has a selection of airlines performed over the past few years?

See this presentation from the BIWA SIG for more examples of ORE queries against the flight delays dataset, which you can adapt from the ONTIME_S dataset that ships with ORE as part of the install.

Now where R and ORE get really interesting, in the context of BI and OBIEE, is when you embed R scripts directly in the Oracle Database and use them to provide forecasting, modelling and other “advanced analytics” features using the database’s internal JVM and an R engine that gets spun-out on-demand. Once you’ve done this, you can expose the calculations through an OBIEE RPD, as Oracle have done in the OBIEE 11.1.1.7.1 SampleApp, shown below: 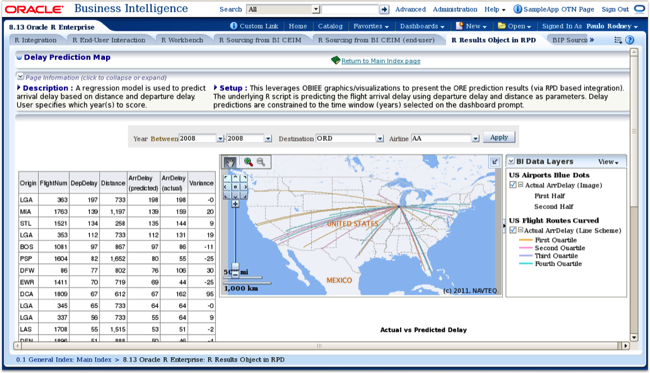 But that’s really an article in itself - so I’ll cover this process and how you surface it all through OBIEE in a follow-up post soon.