Virtualisation has revolutionised how we work as developers. A decade ago, using new software would mean trying to find room on a real tin server to install it, hoping it worked, and if it didn’t, picking apart the pieces probably leaving the server in a worse state than it was to begin with. Nowadays, we can just launch a virtual machine to give a clean environment and if it doesn’t work - trash it and start again.
The sting in the tail of virtualisation is that full-blown VMs are heavy - for disk we need several GB just for a blank OS, and dozens of GB if you’re talking about a software stack such as Fusion MiddleWare (FMW), and the host machine needs to have the RAM and CPU to support it all too. Technologies such as Linux Containers go some way to making things lighter by abstracting out a chunk of the OS, but this isn't something that's reached the common desktop yet.

So whilst VMs are awesome, it’s not always practical to maintain a library of all of them on your local laptop (even 1TB drives fill up pretty quickly), nor will your laptop have the grunt to run more than one or two VMs at most. VMs like this are also local to your laptop or server – but wouldn’t it be neat if you could duplicate that VM and make a server based on it instantly available to anyone in the world with an internet connection? And that’s where The Cloud comes in, because it enables us to store as much data as we can eat (and pay for), and provision “hardware” at the click of a button for just as long as we need it, accessible from anywhere. 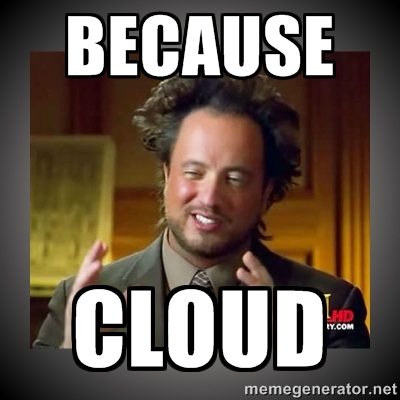 Here at Rittman Mead we make extensive use of Amazon Web Services (AWS) and their Elastic Computing Cloud (EC2) offering. Our website runs on it, our training servers run on it, and it scales just as we need it to. A class of 3 students is as easy to provision for as a class of 24 - no hunting around for spare servers or laptops, no hardware sat idle in a cupboard as spare capacity "just in case".

One of the challenges that we’ve faced up until now is that all servers have had to be built from scratch in the cloud. Obviously we work with development VMs on local machines too, so wouldn’t it be nice if we could build VMs locally and then push them to the cloud? Well, now we can. Amazon offer a route to import virtual machines, and in this article I’m going to show how that works. I’ll use the superb SampleApp v406 VM that Oracle provide, because this is a great real-life example of a VM that is so useful, but many developers can find too memory-intensive to be able to run on their local machines all the time.

This tutorial is based on exporting a Linux guest VM from a Linux host server. A Windows guest probably behaves differently, but a Mac or Windows host should work fine since VirtualBox is supported on both. The specifics are based on SampleApp, but the process should be broadly the same for all VMs.

We're going to use SampleApp, which can be downloaded from Oracle.

Importing Linux VMs to Amazon EC2 will only work if the kernel is supported, which according to an AWS blog post includes Red Hat Enterprise Linux 5.1 - 6.5. Whilst SampleApp v406 is built on Oracle Linux 6.5 (which isn’t listed by AWS as supported), we have the option of telling the VM to use a kernel that is Red Hat Enterprise Linux compatible (instead of the default Unbreakable Enterprise Kernel - UEK). There are some other pre-requisites that you need to check if you’re trying this with your own VM, including a network adaptor configured to use DHCP. The aforementioned blog post has details.

Now we’re ready to really get going. The first step is to export the VirtualBox VM to a format that Amazon EC2 can work with. Whilst they don’t explicitly support VMs from VirtualBox, they do support the VMDK format – which VirtualBox can create. You can do the export from the graphical interface, or as before, from the command line:

If you compare the result of this to what we downloaded from Oracle it looks pretty similar - an OVF file and a VMDK file. The only difference is that the VMDK file is updated with the changes we made above, including the modified kernel settings which are crucial for the success of the next step.

We’re ready now to get all cloudy. For this, you’ll need:

What’s going to happen now is we use an EC2 command line tool to upload our VMDK (virtual disk) file to Amazon S3 (a storage platform), from where it gets converted into an EBS volume (Elastic Block Store, i.e. a EC2 virtual disk), and from there attached to a new EC2 instance (a "server"/"VM"). 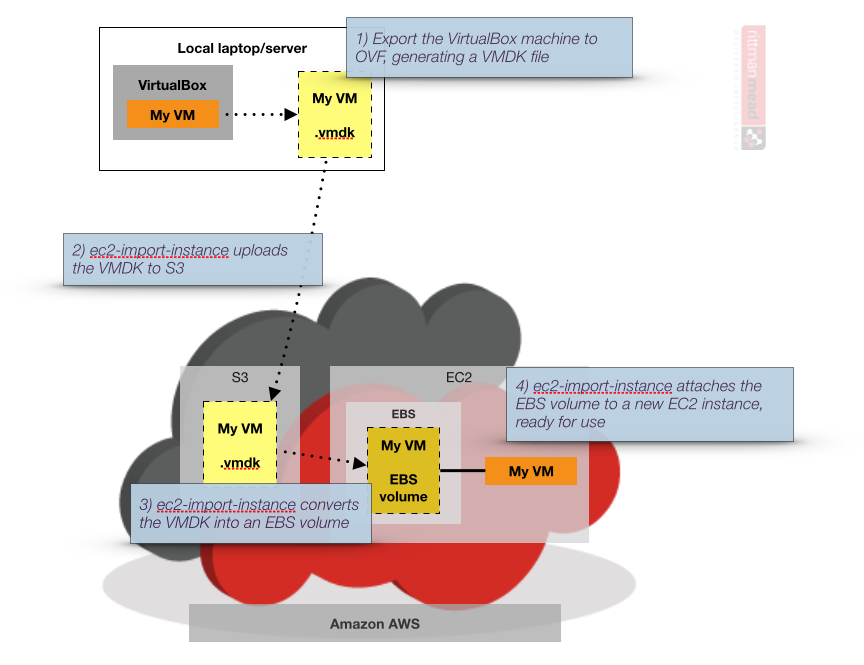 Before we can do the upload we need an S3 “bucket” to put the disk image in that we’re uploading. You can create one from https://console.aws.amazon.com/s3/. In this example, I’ve got one called rmc-vms - but you’ll need your own. 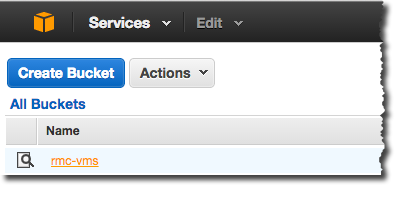 Once the bucket has been created, we build the command line upload statement using ec2-import-instance:

The upload process took just over 45 minutes for me, and that’s from a data centre with a decent upload:

Once the upload has finished Amazon automatically converts the VMDK (now residing on S3) into a EBS volume, and then attaches it to a new EC2 instance (i.e. a VM). You can monitor the status of this task using ec2-describe-conversion-tasks, optionally filtered on the TaskId returned by the import command above:

This is now an ideal time to mention as a side note the Linux utility watch, which simply re-issues a command for you every x seconds (2 by default). This way you can leave a window open and keep an eye on the progress of what is going to be a long-running job

And whilst we’re at it, if you’re using a remote server to do this (as I am, to take advantage of the large bandwidth), you will find screen invaluable for keeping tasks running and being able to reconnect at will. You can read more about screen and watch here.

So back to our EC2 import job. To start with, the task will be Pending: (NB unlike lots of CLI tools, you read the output of this one left-to-right, rather than as columns with headings)

After a few moments it gets underway, and you can see a Progress percentage indicator: (scroll right in the code snippet below to see)

Note that at this point you’ll see also see an Instance in the EC2 list, but it won’t launch (no attached disk – because it’s still being imported!)

If something goes wrong you’ll see the Status as cancelled, such as in this example here where the kernel in the VM was not a supported one (observe it is the UEK kernel, which isn’t supported by Amazon):

After an hour or so, the task should complete:

At this point you can remove the VMDK from S3 (and should do, else you'll continue to be charged for it), following the instructions for ec2-delete-disk-image

Booting the new server on EC2

Go to your EC2 control panel, where you should see an instance (EC2 term for “server”) in Stopped state and with no name.

Select the instance, and click Start on the Actions menu. After a few moments a Public IP will be shown in the details pane. But, we’re not home free quite yet…read on.

So this is where it gets a bit tricky. By default, the instance will have launched with Amazon’s Firewall (known as a Security Group) in place which - unless you have an existing AWS account and have modified the default security group’s configuration - is only open on port 22, which is for ssh traffic.

You need to head over to the Security Group configuration page, accessed in several ways but easiest is clicking on the security group name from the instance details pane:

Click on the Inbound tab and then Edit, and add “Custom TCP Rule” for the following ports:

You can make things more secure by allowing access to the WLS admin (7001) and VNC port (5902) to a specific IP address or range only.

Whilst we’re talking about security, your server is now open to the internet and all the nefarious persons out there, so you’ll be wanting to harden your server not least by resetting all the passwords to ones which aren’t publicly documented in the SampleApp user documentation!

Once you’ve updated your Security Group, you can connect to your server! If you installed the OBIEE and database auto start scripts (and if not, why not??) you should find OBIEE running just nicely on http://[your ip]:7780/analytics – note that the port is 7780, not 9704. 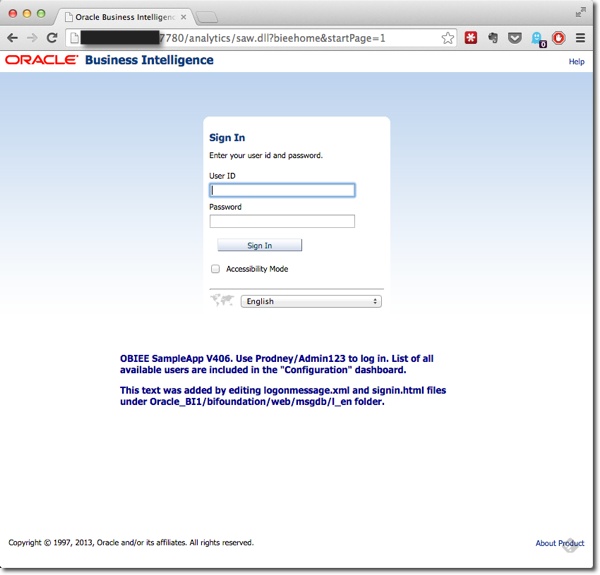 If you didn’t install the script, you will need to start the services manually per the SampleApp documentation. To connect to the server you can ssh (using Terminal, PuTTY, etc) to the server or connect on VNC (Admin123 is the password). For VNC clients try Screen Share on Macs (installed by default), or RealVNC on Windows.

Amazon EC2 supports taking a snapshot of a server, either for backup/rollback purposes or spinning up as a clone, using an Amazon Machine Image (AMI). From the Instances page, simply select "Create an Image" to build your AMI. You can then build another instance (or ten) from this AMI as needed, exact replicas of the server as it was at the point that you created the image.

There’s a whole host of VirtualBox “appliances” out there, and some of them such as the developer-tools-focused ones only really make sense as local VMs. But there are plenty that would benefit from a bit of “Cloud-isation”, where they’re too big or heavy to keep on your laptop all the time, but are handy to be able to spin up at will. A prime example of this for me is the EBS Vision demo database that we use for our BI Apps training. Oracle used to provide an pre-built Amazon image (know as an AMI) of this, but since withdrew it. However, Oracle do publish Oracle VM VirtualBox templates for EBS 12.1.3 and 12.2.3 (related blog), so from this with a bit of leg-work and a big upload pipe, it's a simple matter to brew your own AWS version of it -- ready to run whenever you need it.