In a few previous posts and magazine articles I’ve covered connecting OBIEE11g to a Hadoop cluster, using OBIEE 11.1.1.7 and Cloudera CDH4 and CDH5 as the examples. Things get a bit complicated in that the DataDirect Apache Hive ODBC drivers that Oracle ship are only for HiveServer1 and not the HiveServer2 version that CDH4 and CDH5 use, and the Linux version of OBIEE 11.1.1.7 won’t work with the Cloudera Hive ODBC drivers that you have to use to connect to Hive on CDH4/5. You can however connect OBIEE 11.1.1.7 on Windows to HiveServer2 on CDH4 and CDH5 if you use the Cloudera Hive ODBC drivers for Windows, and although this isn’t supported by Oracle in my experience it does work, albeit with the general OBIEE11g Hive restrictions and caveats detailed in the Metadata Repository Builder’s Guide, and the fact that in-practice Hive is too slow to use for ad-hoc reporting.

However … most enterprise-type customers who run Hadoop on their internal networks have their clusters configured as “secured”, rather than the unsecured cluster examples that you see in most OBIEE connection examples. By default, Hadoop clusters are very trusting of incoming network and client connections and assume that whoever’s connecting is who they say they are, and HDFS and the other cluster components don’t perform any authentication themselves of incoming client connections. In addition, by default all network connections between Hadoop cluster components run in clear text and without any mutual authentication, which is great for a research cluster or PoC but not really appropriate for enterprise customers looking to use Hadoop to store and analyse customer data.

Instead, these customers configure their clusters to run in secured mode, using Kerberos authentication to secure incoming connections, encrypt network traffic and secure connections between the various services in the cluster. How this affects OBIEE though is that your Hive connections through to the cluster also need to use Kerberos authentication, and you (and the OBIEE BI Server) need to have a valid Kerberos ticket when connecting through the Hive ODBC driver. So how do we set this up, and how do we get hold of a secure Hadoop cluster using Kerberos authentication to test against? A few of our customers have asked this question recently, so I thought it’d be worth jotting down a few notes on how to set this up.

At a high-level, if you want to connect OBIEE 11.1.1.7 to a secure, Kerberos-authenticated CDH cluster, there’s three main steps you need to carry out:

In my case, I’ve got a Cloudera CDH5.3.0 cluster running in the office that’s been configured to use MIT Kerebos 5 for authentication, set up using an OEL6 VM as the KDC (Key Distribution Centre) and the cluster configured using the new Kerebos setup wizard that was introduced with CDH5.1. Using this wizard automates the creation of the various Kerberos service account and host principals in the Kerberos database, and configures each of the cluster components - YARN, Hive, HDFS and so on - to authenticate with each other using Kerberos authentication and use encrypted network connections for inter-service and inter-node communication. 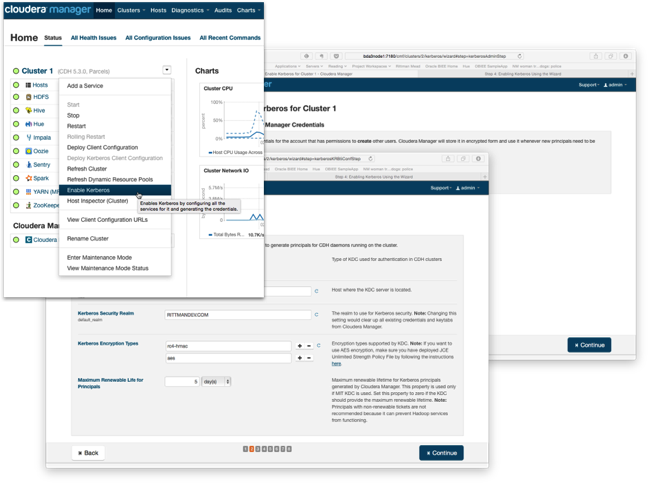 Along with the secured Hadoop cluster, key bits of information and configuration data you’ll need for the OBIEE side are:

In my case, the krb5.conf file that is used to configure Kerebos connections to my KDC looks like this - in your company it might be a bit more complex, but this example defines a simple MIT Kerebos 5 domain:

In my setup, the CDH Hadoop cluster has been configured to use Kerberos authentication for all communications between cluster components and any connections from the outside that use those components; the cluster itself though can still be accessed via unsecured (non-Kerebos authenticated) SSH, though of course this aspect could be secured too. To test out the Hive connectivity before we get into the OBIEE details you can use the beeline CLI that ships with CDH5, and to do this you’ll need to be able to SSH into one of the cluster nodes (if you’ve not got beeline installed on your own workstation) and you’ll need an account (principal) created for you in the Kerebos database to correspond to the Linux user and HDFS/Hive user that has access to the Hive tables you’re interested in. To create such a Kerebos principal for my setup, I used the kadmin.local command on the KDC VM to create a user that matched my Linux/HDFS username and gave it a password:

SSH’ing into one of the secure CDH cluster nodes, I first have to authenticate using the kinit command which when successful, creates a Kerebos ticket that gets cached for a set amount of time, and beeline can thereafter use as part of its own authentication process:

Now I can use beeline, and pass the Hive service principal name in the connection details along with the usual host, port and database name. When beeline prompts for my username and password, I use the Kerberos principal name that matches the Linux/HDFS one, and enter that principal’s password:

So at this point I’ve covered off the first two steps; established the connection details for the secure CDH cluster, and got hold of and confirmed the Kerberos principal details that I’ll need to connect to Hive - now its time to set up the OBIEE element.

In this particular example we’re using Windows to host OBIEE 11.1.1.7, as this is the only platform that we can get the HiveServer2 ODBC drivers to work, in this case the Cloudera Hive ODBC drivers available on their website (free download but registration may be needed). Before we can get this ODBC driver to work though, we need to install the Kerberos client software on the Windows machine so that we can generate the Kerberos ticket that the ODBC driver will need to pass over as part of the authentication process.

To configure the Windows environment for Kerberos authentication, in my case I used the Kerberos for Windows 4.x client software downloadable for free from the MIT website and copied across the krb5.conf file from the KDC server, renaming it to krb5.ini and storing it the default location of c:\ProgramData\MIT\Kerberos5. 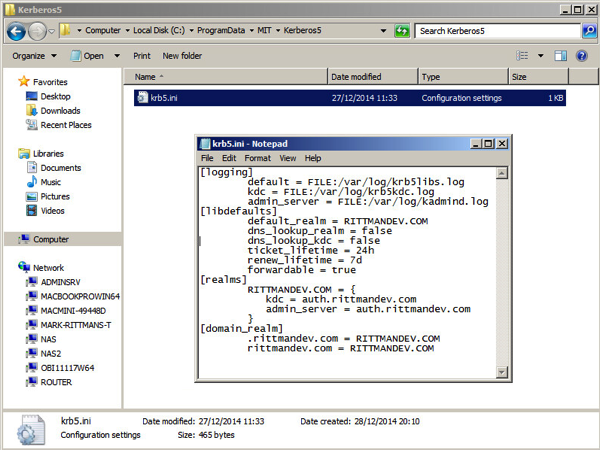 You also need to define a system environment variable, KRB5CCNAME, to point to a directory where the Kerebos tickets can be cached, in my case I used c:\temp\krb5cache. Once this is done, reboot the Windows environment and you should then be prompted after login to authenticate yourself to the Kerebos KDC. 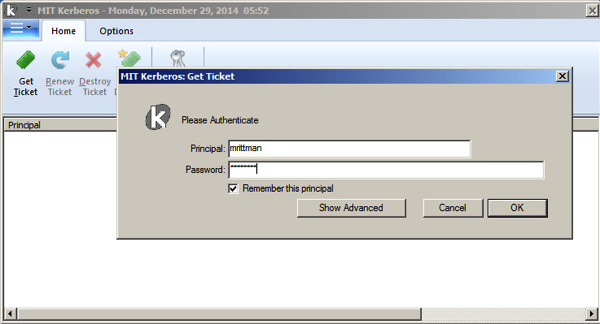 The ticket then stays valid for a set number of days/hours, or you can configure OBIEE itself to authenticate and cache its own ticket - for now though, we’ll create the ticket manually and connect to the secured cluster using these cached ticket details.

After installing the Cloudera Hive ODBC drivers, I create the connection using Kerebos as the Authentication Mechanism, and enter the realm name, HiveServer2 host and the Hive Kerebos principal name, like this: 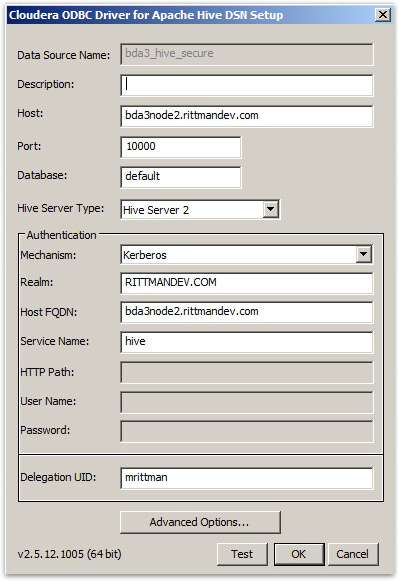 In my case both the BI Administration tool and the OBIEE BI Server were on the same Windows VM, and therefore shared the same ODBC driver install, so I then moved over to the BI Administration tool to import the Hive table metadata details into the RPD and create the physical, logical and presentation layer RPD elements. Depending on how your CDH cluster is set up you might be able to test the connection now by using the View Data… menu item in BI Administration, but in my case I had to do two more things on the CDH cluster itself before I could get Hive queries under this Kerberos principal to run properly. 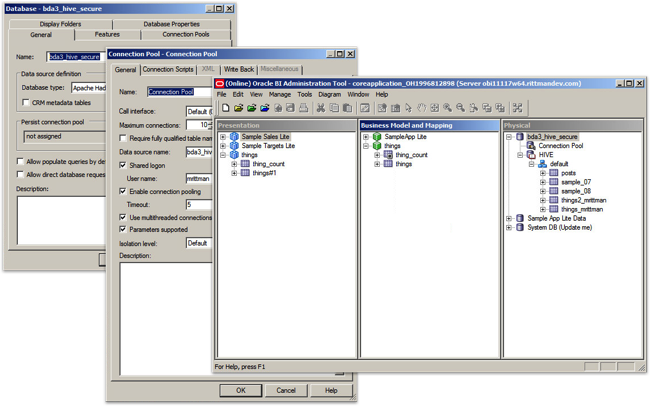 First, as secured CDH Hadoop clusters usually configure HiveServer2 to use "user impersonation” (connecting to Hive as the user you authenticate as, not the user that HiveServer2 authenticates to the Hive service as), YARN and MapReduce jobs run under your account and not the usual “Hive” account that unsecured Hive connections use. Where this causes a problem on CDH installations on RHEL-derived platforms (RHEL, OEL, Centos etc) is that YARN normally blocks jobs running on behalf of users with a UID of <1000 (as this on other Linux distributions typically signifies a system account), RHEL starts user UIDs at 500 and YARN therefore blocks them from running jobs. To fix this, you need to go into Cloudera Manager and edit the YARN configuration settings to lower this UID threshold to something under 500, for example 250: 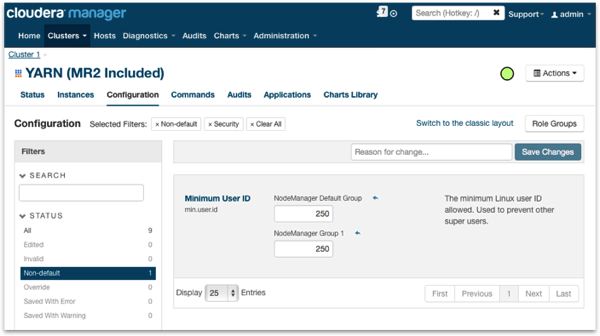 I also needed to alter the group ownership of the temporary directory each node used for the YARN NodeManager’s user files so that YARN could write its temporary files correctly; on each node in the cluster I ran the following Linux commands as root to clear down any files YARN had created before, and recreate the directories with the correct permissions (Hive jobs would fail until I did this, with OBIEE just reporting an ODBC error):

Once this is done, queries from the BI Administration tool and from the OBIEE BI Server should connect to the Kerberos-secured CDH cluster successfully, using the Kerberos ticket you obtained using the MIT Kerberos Ticket Manager on login and then passing across the user details under which the YARN, and then Hive job should run. 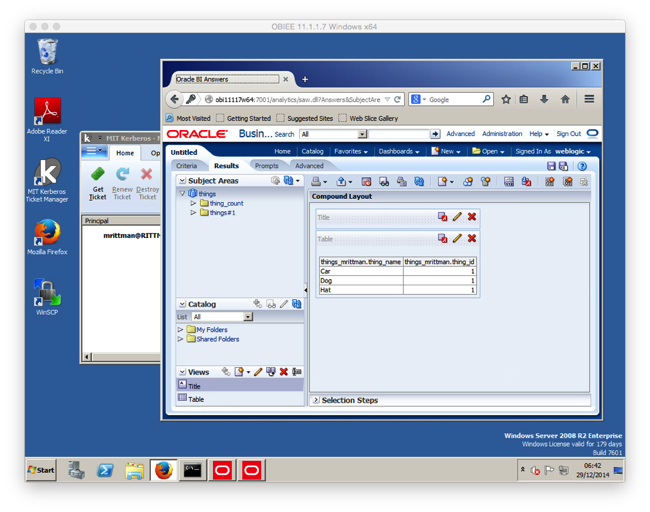 If you’re interested, you can go back to the MIT Kerberos Ticket Manager and see the other Kerberos tickets that were requested and then cached by the Cloudera Hive ODBC driver when it mutually authenticated with the HiveServer2 RPC interface - Kerebos authenticates both ways to ensure that who you’re connecting to is actually who they say they are, in this case checking the HiveServer2 connection you’re connecting to isn’t being spoofed by someone else. 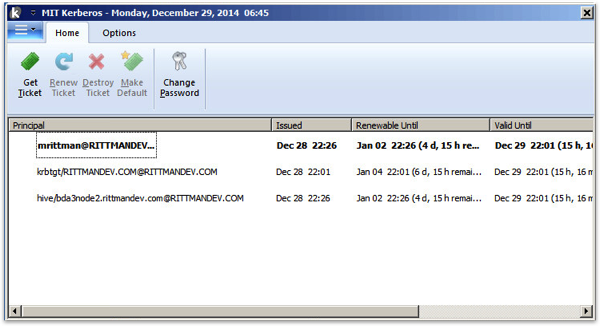 So that’s the process for connecting OBIEE to a Kerberos-secured CDH Hadoop cluster in a nutshell; in the New Year I’ll put something together on using Apache Sentry to provide role-based access control for Hive and Impala tables and as of CDH 5.3, HDFS directories, and I’ll also take a look at the new extended ACLs feature in CDH5.2 that goes beyond HDFS’s standard POSIX security model.