Here is another question I often hear during ODI Bootcamp or I often read in the ODI Space on OTN :
In a package, should I directly use mappings (or interfaces prior to 12c) or is it better to use the scenarios generated from these mappings?

An ODI package is a workflow used to sequence the different steps of execution of a data integration process. Some of these steps might change the value of a variable, evaluate a variable, perform an administrative task like sending an email or retrieving a file from an FTP. But the core thing is the execution of a mapping and this can be done in two different ways.

It is possible to directly drag and drop a mapping in the package.

In this example the mapping M_FACT_SALES_10 is directly executed within the package, in the same session. This means that the value of the variables will be the same as the ones in the package.

If there are several mappings, they will be executed sequentially, there is no parallelism here. (Damn, I will never get the double L at the right place in that word... Thanks autocorrect!)

The code for the mapping is generated using the current state of the mapping in the work repository, including any changes done since the package was created. But if a scenario is created for the package PCK_FACT_LOAD_MAP, it will need to be regenerated – or a new version should be generated – to take any change of M_FACT_SALES_10 into account.

One good point for this approach is that we can build a data integration process that will be entirely rolled back in case of failure. If one of the step fails, the data will be exactly as it was before the execution started. This can be done by using the same transaction for all the mappings and disable the commit option for all of them but the last one. So it’s only when everything succeeds that the changes will be committed and available for everyone. Actually it’s not even required to commit on the last step as ODI will anyway issue a commit at the end of a successful session. This technique works of course only if you don’t have any DDL statement on the target tables. You will find more information about it on this nice blog post from Bhabani Rajan : Transaction Control in ODI. Thanks to David Allan for reminding me this! 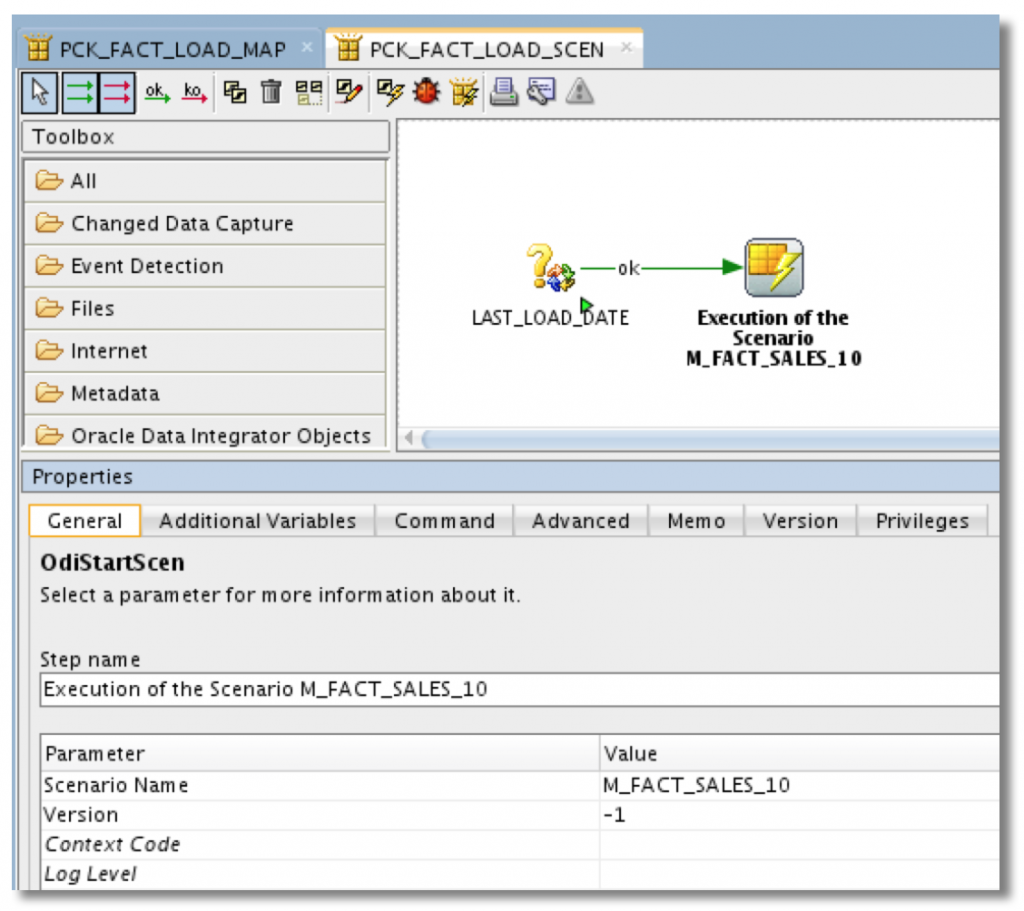 In this case, the execution of the mapping will not be done within the package session. Instead, on step of this session will use the OdiStartScen command to trigger a new session to execute the scenario.

We can see here that the second step of the package session (401) got only one task which will run the command to start a new session. The only step in the new session (402) is the mapping and it has the three same tasks as the previous example. Thanks to the fact this is a different session, you could choose to execute it using another context or agent. My colleague Michael brought an interesting use case to me. When one step of your package must extract data from a file on a file server that has its own standalone agent installed to avoid permission issues, you could specify that agent in the Scenario step of your package. So the session for that scenario will be started on that standalone agent while all the other sessions will use the execution agent of the parent session.

But what about variables configured to keep no history? As this is a different session, the values are lost outside of the scope of one session. We therefore need to pass it as startup parameters to the scenario of the mapping.

To do this, I go to the Command tab on the scenario step and I add my variables there with the syntax

where <VALUE_TO_ASSIGN> can be the value of variable in the current session itself (401 in our case).

The scenario step name was originally "Execution of the Scenario M_FACT_SALES_10 version 001" and I slightly modified it to remove the mention of a version number. As I want to always execute the last version of the scenario, I also changed the version in the parameters and set it to -1 instead of 001. There is a small bug in the user interface so if you click somewhere else, it will change back to 001. The workaround is to press the Return key (or Enter) after typing your value.

So by using a scenario, you can choose which version of a scenario you want to execute. Either a specific version (e.g. 003) or the last one, using the value -1. It also means that if you won't break anything if the package is executed while you are working on the mapping. The package will still use the frozen code of the scenario even if you changed the mapping.

If you create a scenario for the package PCK_FACT_LOAD_SCEN, there is no need to regenerate it when a new scenario is (re-)generated for the mapping. By using -1, it will reference the newly generated scenario.

Another advantage of using scenarios is that it supports parallelism (Yes, I got it right!!). 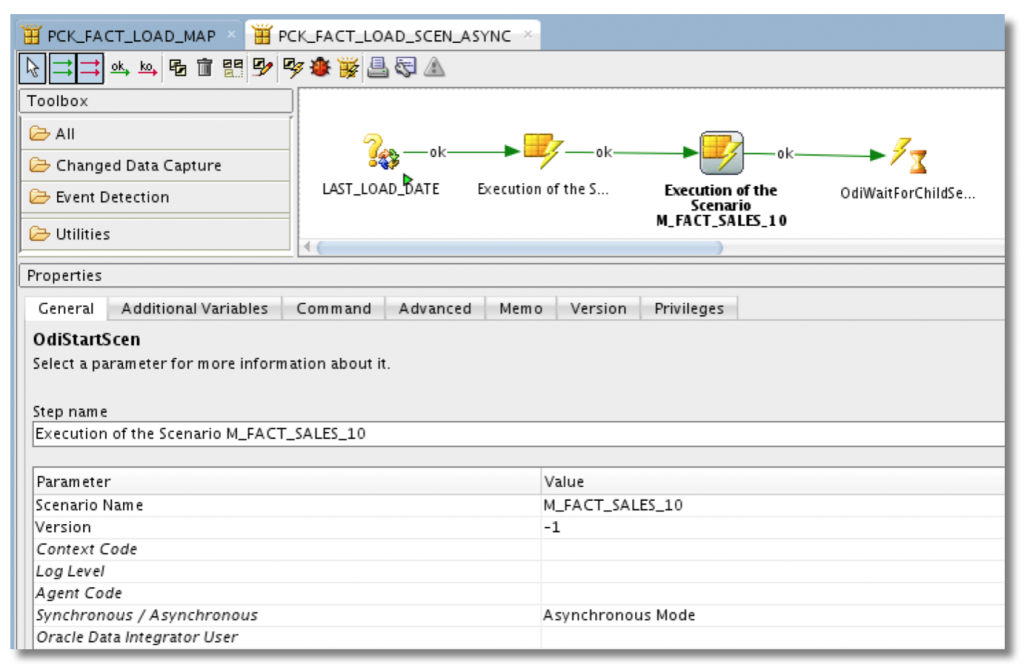 Here I set the "Synchronous / Asynchronous" option to "Asynchronous Mode" for my two scenarios so the two sessions will start at the same time. By adding an OdiWaitForChildSessions step, I can wait for the end of all the sessions before doing anything else. This step will also define in which case you want to report an error. By default, it's when all the child sessions are in error. But I usually change to parameter to zero, so any failure will cause my package execution to fail as well.

Just a short note, be careful when using the method getPrevStepLog() from the substitution API in a step after executing a scenario. That method will retrieve information about the previous step in the current Session. So about the ODI command execution OdiStartScen, and not about the execution of the scenario itself.

Here is a small recap table to compare both approach : 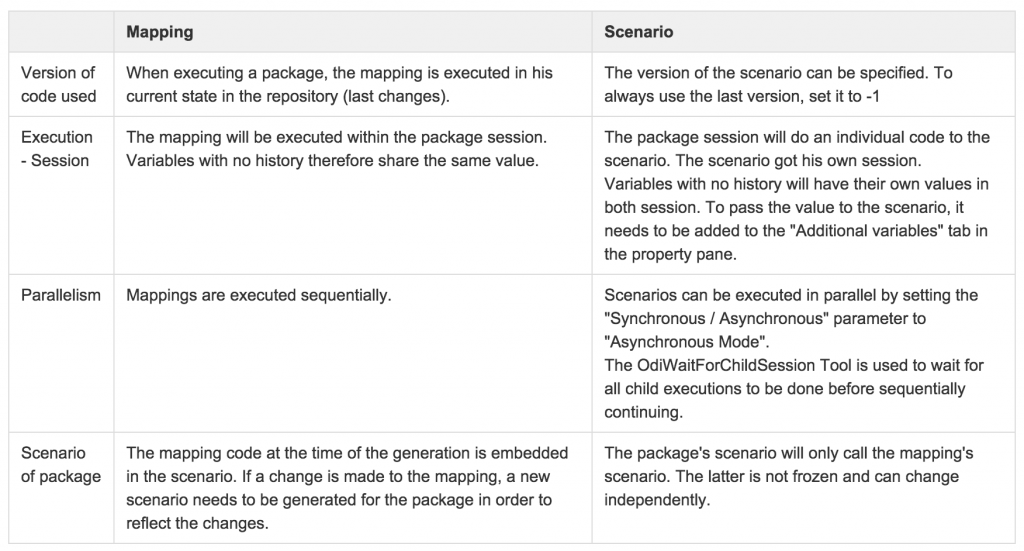 In conclusion, development is generally more robust when using scenarios in packages. There is more control on what is executed and on the parallelism. The only good reason to use mappings directly is to keep everything within the same transaction.

Keep also in mind that Load Plans might be a better alternative than packages with better parallelism, error handling and restartability. Unless you need loops or a persistent session... A comparison between Load Plans and Packages can be found in the Oracle blog post introducing Load Plans.

More tips and core principles demystification coming soon so stay tuned. And follow @mRainey, @markrittman and myself – @JeromeFr – on twitter to be informed of anything happening in the ODI world.