Oracle released an update to Oracle BI Cloud Service a few weeks ago that included Oracle Visual Analyzer, along with some other improvements including support for full Oracle Database-as-a-Service as the database backend, the ability to upload RPDs and run them in the cloud, and support for a new utility called DataSync. In this post though I want to take a quick look at Visual Analyzer, and in-particular look at the data-mashup feature it provides.

Visual Analyzer is of course one of the tentpole features in OBIEE12c that we’ve all been looking forward to, as is 12c’s ability to allow users to upload spreadsheets of data and join them to existing subject areas in Answers. I’m covering Visual Analyzer in an upcoming edition of Oracle Magazine so I won’t go into too much detail on the product at a high-level here, but in summary Visual Analyzer provides a single-pane-of-glass, Tableau-type environment for analysing and visualising datasets stored in Oracle Cloud Database and modelled in BICS’s cut-down web-based data-modeller. In the Oracle Magazine article I take the Donors Choose dataset that we featured at the recent Rittman Mead BI Forum 2015, and create a range of visualizations as I explore the dataset and pick the type of project I’d most like to donate to. 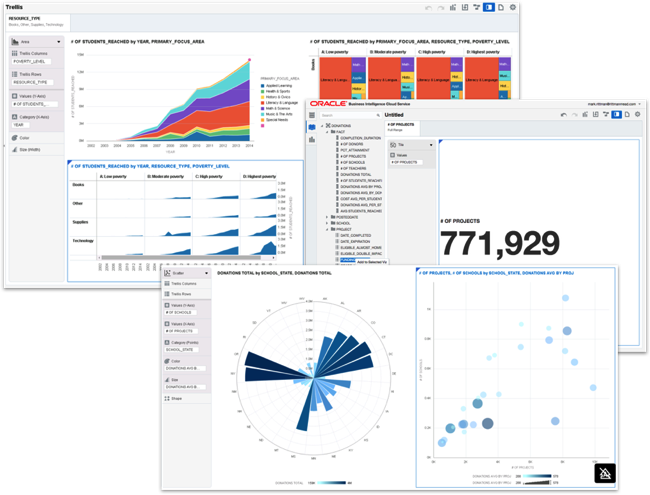 Visual Analyzer differs from Answers in that all of the available data items are listed down one side of the page, there’s no flicking backwards-and-forwards between the Criteria tab and the Results tab, filters are set by just right-clicking on the column you wish to filter by, and the visualisation builds up in front-of your eyes as you add more columns, move things around and arrange the data to get the most appropriate view of it.

From an IT manager’s perspective, where Visual Analyzer improves on desktop analysis tools such as Tableau and Spotfire is that the data you work with is the same governed dataset that Answers and Dashboards users work with, the same security rules and auditing apply to you as to other Presentation Services and Catalog users, but those types of “self-service” users who just want to play-around with and explore the data - rather than create reports and dashboards for mass consumption - now can work with the type of tool they’ve up-to-now had to look elsewhere for. 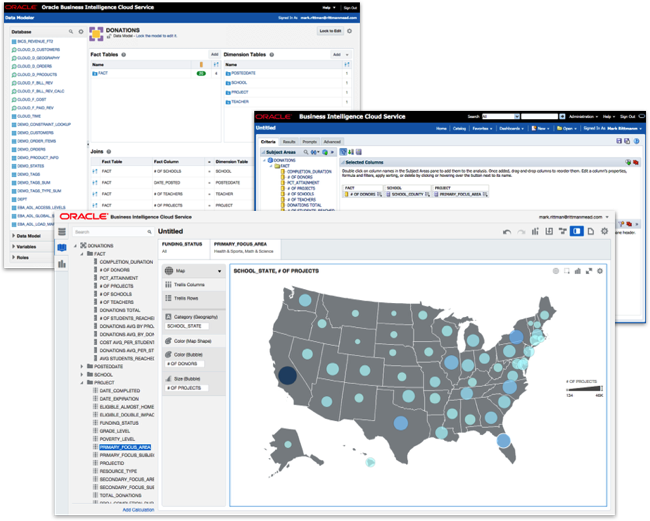 One of the other headline features for OBIEE12c announced at last year’s Oracle Openworld is “Model Extensibility and Data Mashup”. Announced as part of Paul Rodwick’s “Business Analytics and Strategy Roadmap” session and described in the slide below, this feature extends the capabilities of the BI Server to now handle data the user uploads from the Answers (and now Visual Analyzer) report creation page, joining that data as either “fact extensions” or “measure extensions” to an existing Presentation Services subject area. 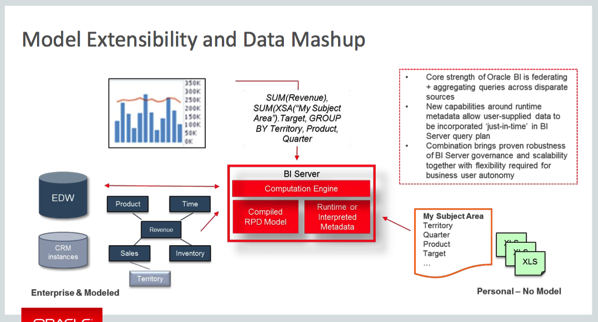 I won’t go into the technical details of how this works at this point but in terms of how it looks to the end-user, let’s consider a situation where I’ve got a spreadsheet of additional state-level data that I’d like to use in this Visual Analyzer (VA) project, to in this case colour the states in the map based on the income level of the people living there. The spreadsheet of data that I’ve got looks like this: 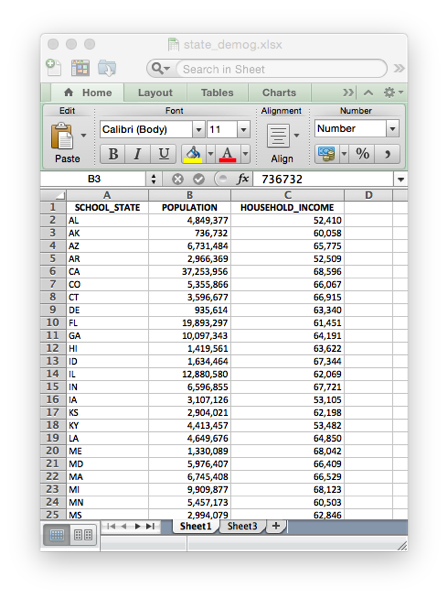 Note the cunningly-named columns in the first row - they don’t have to match the column names in your VA data model, but if they do as you’ll see in a moment it speeds the matching process up. To add this spreadsheet of data to my VA project I therefore switch the menu panel on the left to the Data Sources option, right-click and then choose Add Data Source... 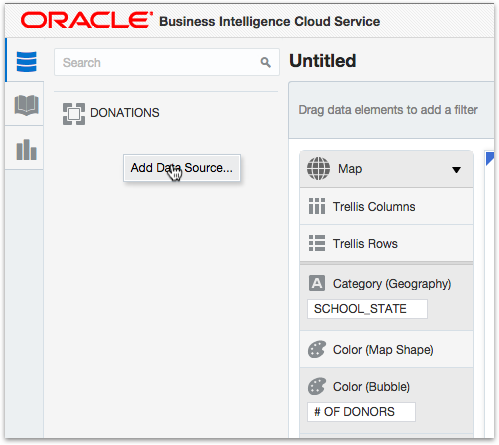 Then using the Add Data Source dialog, upload the XLSX file from your workstation. In my instance, because I named the columns in the top row of the spreadsheet to match the column names already in the BICS data model, it’s matched the SCHOOL_STATE column in the spreadsheet to the corresponding column in the SCHOOLS table and worked out that I’m adding measures, joined on that SCHOOL_STATE column. 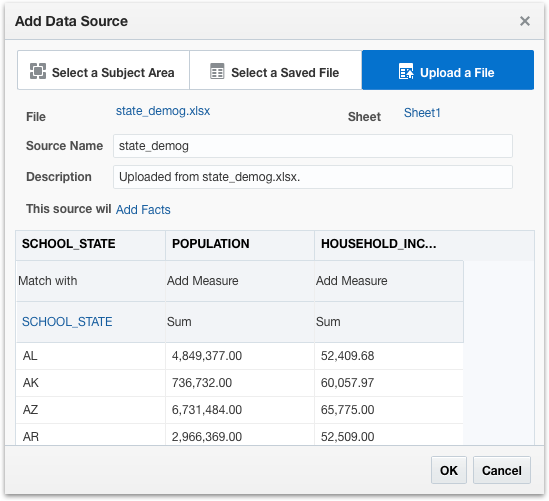 If my spreadsheet contained other text fields matched to the existing model via a dimension attribute, the upload wizard would assume I’m adding dimension attributes, or if it detects them wrong I can match the columns myself, and specify whether the new file contains measures or attributes. BICS then confirms the join between the two datasets and I can then start selecting from the new measures to add to my project. 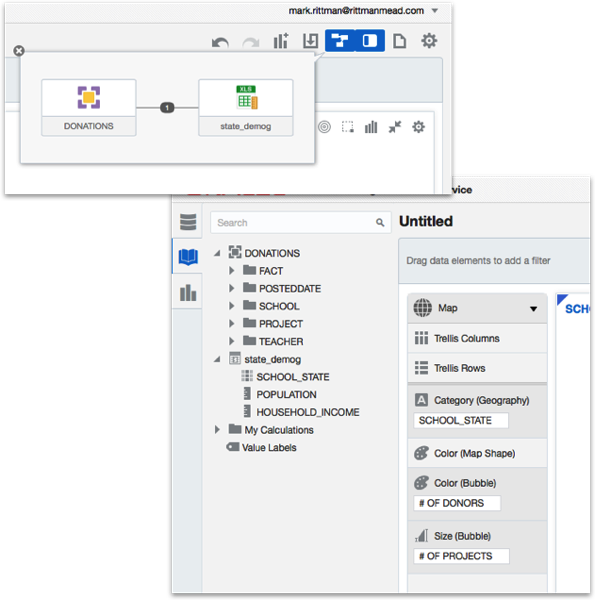 My final step then is to add the HOUSEHOLD_INCOME measure to my visualisation, so that each state is now shaded by the household income level, allowing me to see which states might benefit most from my school project donation. 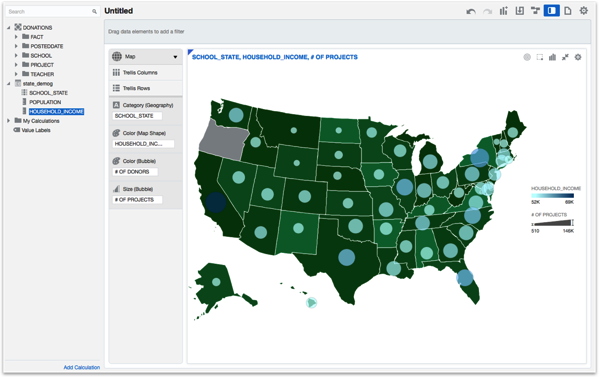 One thing to bear-in-mind when using mashups though, is that what you’re effectively doing is adding a new fact table that joins to the existing one on one or more dimension levels. In my case, my HOUSEHOLD_INCOME and POPULATION measures only join to the DONATIONS dataset on the SCHOOL dimension, and then only at the STATE level, so if I try and reference another column from another dimension - to add, for example a filter on the FUNDING STATUS column within the PROJECTS dimension - the project will error as that dimension isn’t conformed across both facts. 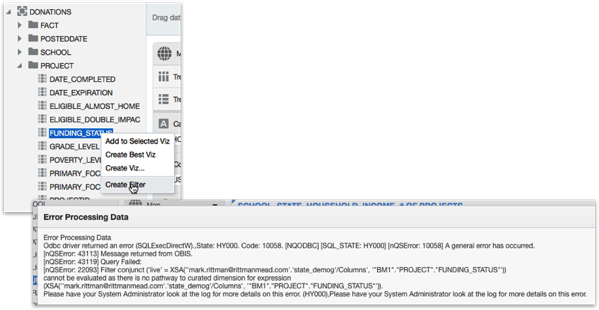 So that’s VA on BICS in a nutshell, with this article drilling-down further into the very interesting new data mashup feature. Look out for more on this new release of BICS soon as I cover the new DataSync feature, RPD uploads and connecting BICS to the full Oracle Database-as-a-Service.