One of the big changes in OBIEE 12c for end users is the ability to upload their own data sets and start analysing them directly, without needing to go through the traditional data provisioning and modelling process and associated leadtimes. The implementation of this is one of the big architectural changes of OBIEE 12c, introducing the concept of the Extended Subject Areas (XSA), and the Data Set Service (DSS).

In this article we'll see some of how XSA and DSS work behind the scenes, providing an important insight for troubleshooting and performance analysis of this functionality.

What is an XSA?

An Extended Subject Area (XSA) is made up of a dataset, and associated XML data model. It can be used standalone, or "mashed up" in conjunction with a "traditional" subject area on a common field 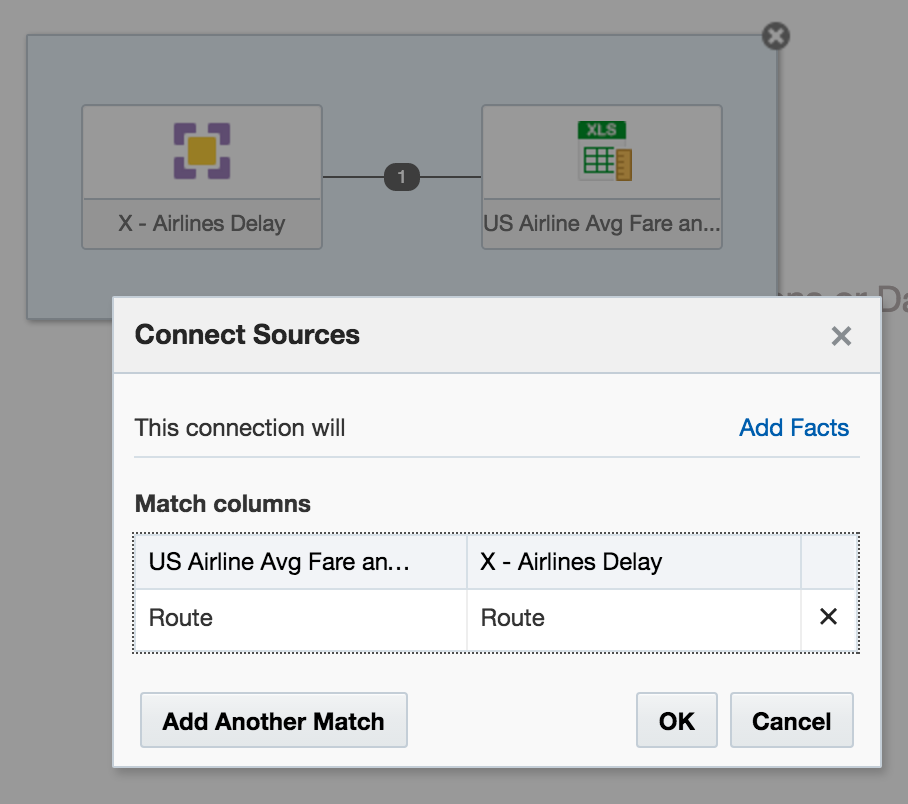 How is an XSA Created?

At the moment the following methods are available:

Under the covers, these all use the same REST API calls directly into datasetsvc. Note that these are entirely undocumented, and only for internal OBIEE component use. They are not intended nor supported for direct use.

How does an XSA work?

External Subject Areas (XSA) are managed by the Data Set Service (DSS). This is a java deployment (datasetsvc) running in the Managed Server (bi_server1), providing a RESTful API for the other OBIEE components that use it. 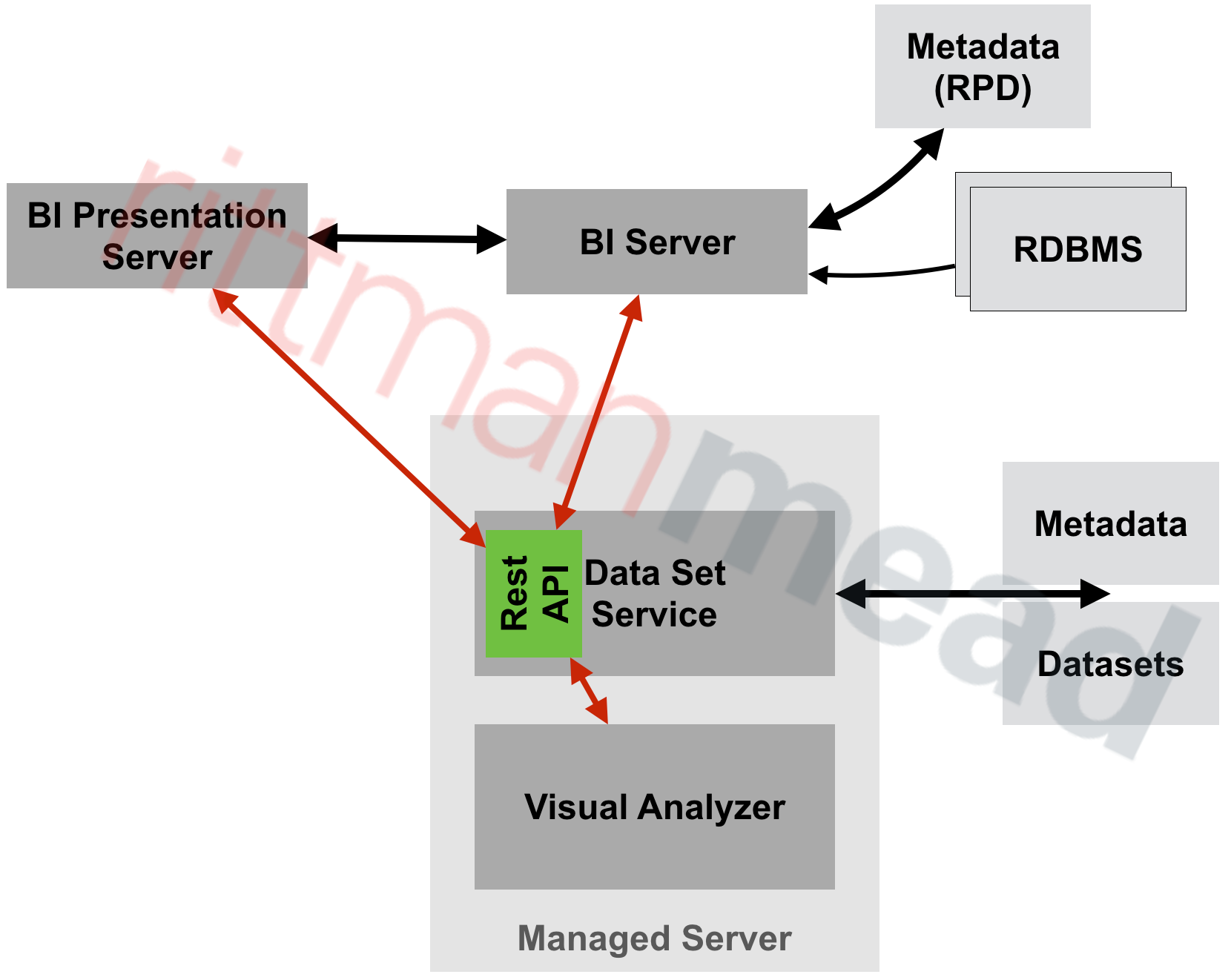 The end-user of the data, whether it's Visual Analyzer or the BI Server, send REST web service calls to DSS, storing and querying datasets within it.

Where is the XSA Stored?

They're stored using the format in which they were created, which is XLSX (via VA) or CSV (via CREATE DATASET)

There's a set of DSS-related tables installed in the RCU schema BIPLATFORM, which hold information including the XML data model for the XSA, along with metadata such as the user that uploaded the file, when they uploaded, and then name of the file on disk:

How Can the Data Set Service be Configured?

The configuration file, with plenty of inline comments, is at ORACLE_HOME/bi/endpointmanager/jeemap/dss/DSS_REST_SERVICE.properties. From here you con update settings for the data set service including upload limits as detailed here.

Since XSA are based on flat files stored in disk, we need to be very careful in their use. Whilst a database may hold billions of rows in a table with with appropriate indexing and partitioning be able to provide sub-second responses, a flat file can quickly become a serious performance bottleneck. Bear in mind that a flat file is just a bunch of data plopped on disk - there is no concept of indices, blocks, partitions -- all the good stuff that makes databases able to do responsive ad-hoc querying on selections of data.

If you've got a 100MB Excel file with thousands of cells, and want to report on just a few of them, you might find it laggy - because whether you want to report on them on or not, at some point OBIEE is going to have to read all of them regardless. We can see how OBIEE is handling XSA under the covers by examining the query log. This used to be called nqquery.log in OBIEE 11g (and before), and in OBIEE 12c has been renamed obis1-query.log.

In this example here I'm using an Excel worksheet with 140,000 rows and 78 columns. Total filesize of the source XLSX on disk is ~55Mb.

First up, I'll build a query in Answers with a couple of the columns:

So of the 55MB of data, we're pulling all the rows (144,000) back to the BI Server for it to then perform the aggregation on it, resulting in the 200 rows returned to the client (Presentation Services). Note though that the byte count is lower (13Mb) than the total size of the file (55Mb).

As well as aggregation, filtering on XSA data also gets done by the BI Server. Consider this example here, where we add a predicate: 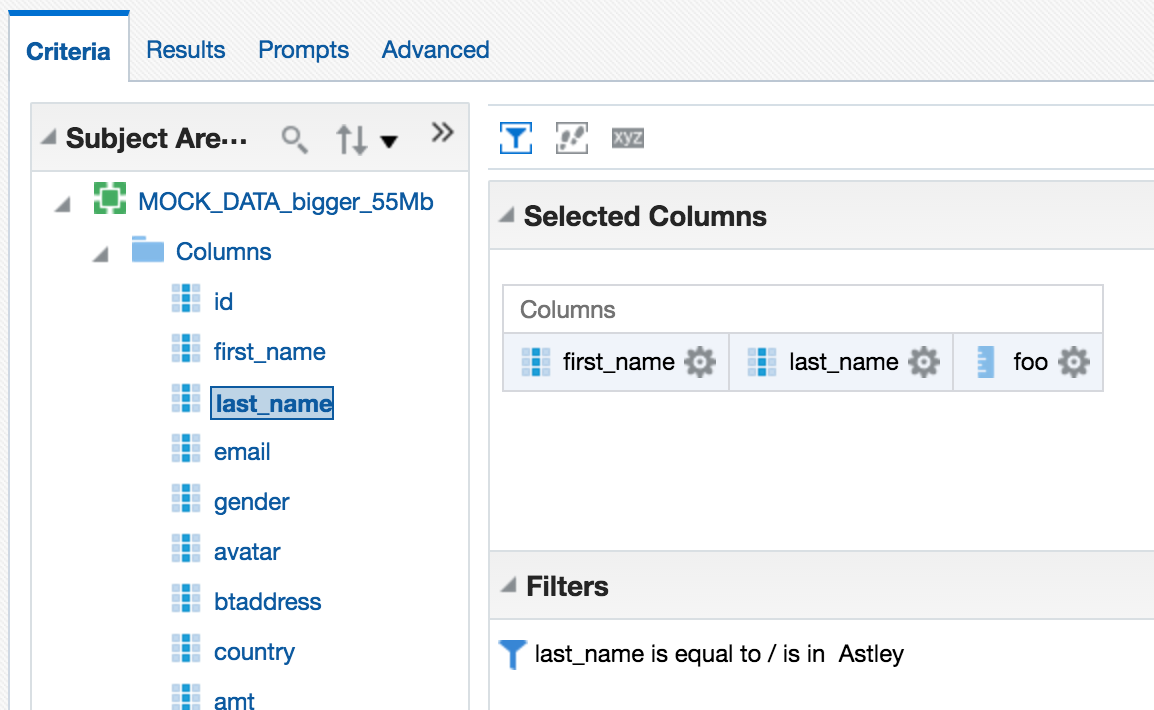 In the query log we can see that all the data has to come back from DSS to the BI Server, in order for it to filter it:

Note the time taken by DSS -- nearly 25 seconds. Compare this later on to when we see the XSA data served from a database, via the XSA Cache.

In terms of BI Server (not XSA) caching, the query log shows that a cache entry was written for the above request:

If I refresh the query in Answers, the data is fetched anew (per this changed behaviour in OBIEE 12c), and the cache repopulated. If I clear the Presentation Services cache and re-open the analysis, I get the results from the BI Server cache, and it doesn't have to refetch the data from the Data Set Service.

Since the cache has two columns in, an attribute and a measure, I wondered if running a query with just the fact rolled up might hit the cache (since it has all the data there that it needs) 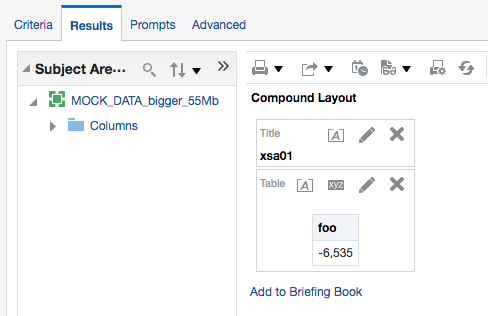 Unfortunately it didn't, and to return a single row of data required BI Server to fetch all the rows again - although looking at the byte count it appears it does prune the columns required since it's now just over 2Mb of data returned this time:

Interestingly if I build an analysis with several more of the columns from the file (in this example, ten of a total of 78), the data returned from the DSS to BI Server (167Mb) is greater than that of the original file (55Mb).

And this data coming back from the DSS to the BI Server has to go somewhere - and if it's big enough it'll overflow to disk, as we can see when I run the above:

You can read more about BI Server's use of temporary files and the impact that it can have on system performance and particularly I/O bandwidth in this OTN article here.

So - as the expression goes - "buyer beware". XSA is an excellent feature, but used in its default configuration with files stored on disk it has the potential to wreak havoc if abused.

If you're planning to use XSA seriously, you should set up the database-based XSA Cache. This is described in detail in the PDF document attached to My Oracle Support note OBIEE 12c: How To Configure The External Subject Area (XSA) Cache For Data Blending| Mashup And Performance (Doc ID 2087801.1).

In a proper implementation you would follow in full the document, including provisioning a dedicated schema and tablespace for holding the data (to make it easier to manage and segregate from other data), but here I'm just going to use the existing RCU schema (BIPLATFORM), along with the Physical mapping already in the RPD (10 - System DB (ORCL)):

And restart the BI Server:

Per the document, note that in the BI Server log there's an entry indicating that the cache has been successfully started:

Now when I re-run the test XSA analysis from above, returning three columns, the BI Server goes off and populates the XSA cache table:

Or rather, it doesn't, because PHYSICAL_SCHEMA seems to want the literal physical schema, rather than the logical physical one (?!) that the USAGE_TRACKING configuration stanza is happy with in referencing the table.

Instead of the more conventional approach to have the actual physical schema (often used in conjunction with 'Require fully qualified table names' in the connection pool):

So now I'll do it properly, and create a database and schema for the XSA cache - I'm still going to use the BIPLATFORM schema though...

After refreshing the analysis again, there's a successful creation of the XSA cache table:

as well as a stats gather:

Although I do note that it is used a fixed estimate_percent instead of the recommended AUTO_SAMPLE_SIZE. The table itself is created with a fixed prefix (as specified in the obis1-diagnostic.log at initialisation), and holds a full copy of the XSA (not just the columns in the query that triggered the cache creation):

With the dataset cached, the query is then run and the query log shows a XSA cache hit

with the resulting physical query fired at the XSA cache table (replacing what would have gone against the DSS web service):

It's important to point out the difference of what's happening here: the aggregation has been pushed down to the database, meaning that the BI Server doesn't have to. In performance terms, this is a Very Good Thing usually.

Whilst it doesn't seem to be recorded in the query log from what I can see, the data returned from the XSA Cache also gets inserted into the BI Server cache, and if you open an XSA-based analysis that's not in the presentation services cache (a third cache to factor in!) you will get a cache hit on the BI Server cache. As discussed earlier in this article though, if an analysis is built against an XSA for which a BI Server cache entry exists that with manipulation could service it (eg pruning columns or rolling up), it doesn't appear to take advantage of it - but since it's hitting the XSA cache this time, it's less of a concern.

If you change the underlying data in the XSA 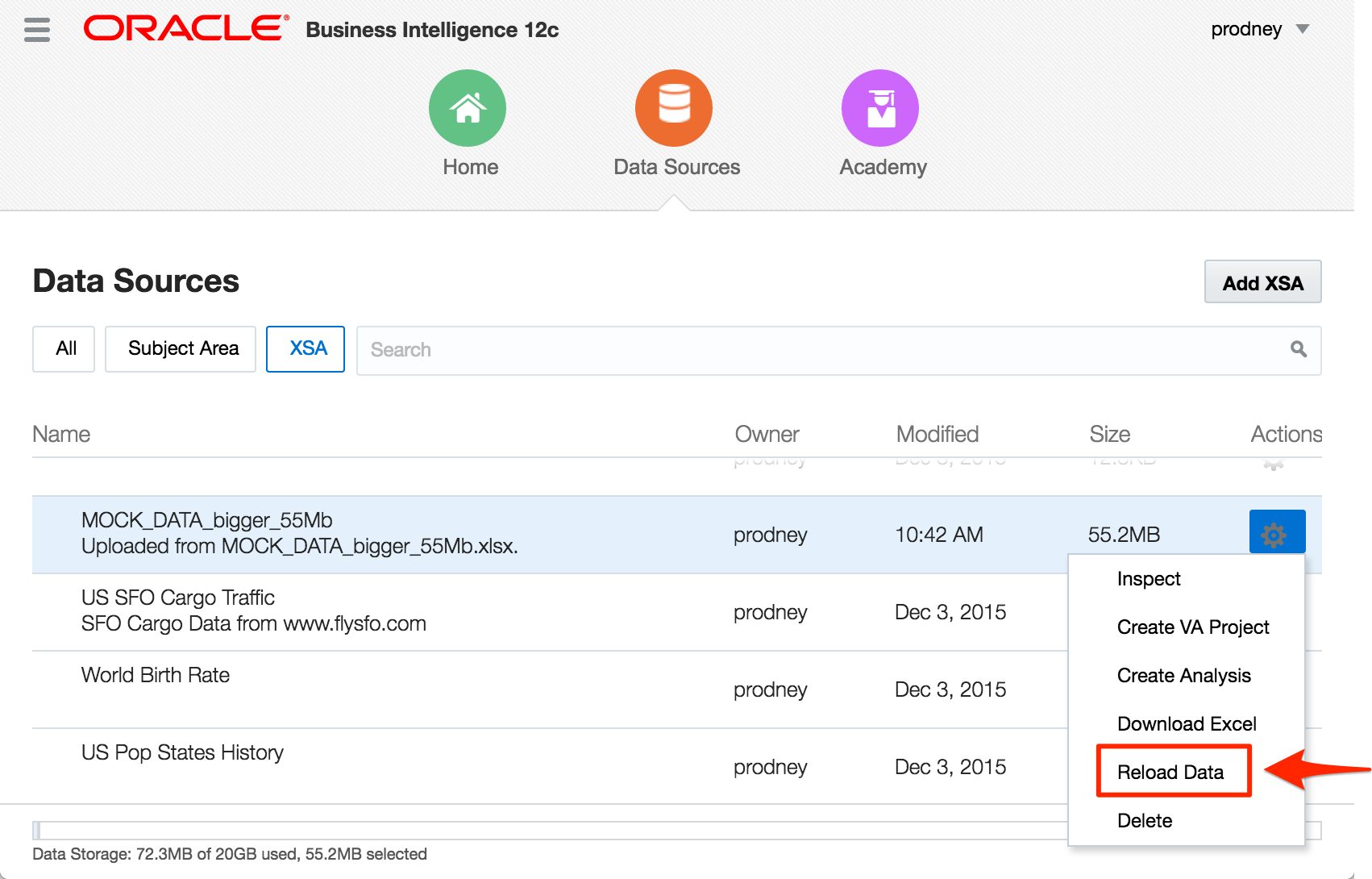 The BI Server does pick this up and repopulates the XSA Cache.

The XSA cache entry itself is 192Mb in size - generated from a 55Mb upload file. The difference will be down to data types and storage methods etc. However, that it is larger in the XSA Cache (database) than held natively (flat file) doesn't really matter, particularly if the data is being aggregated and/or filtered, since the performance benefit of pushing this work to the database will outweigh the overhead of storage space. Consider this example here, where I run an analysis pulling back 44 columns (of the 78 in the spreadsheet) and hit the XSA cache, it runs in just over a second, and transfers from the database a total of 5.3Mb (the data is repeated, so rolls up):

If I disable the XSA cache and run the same query, we see this:

That's 764Mb being sent back for the BI Server to process, which it does by dumping a whole load to disk in temporary work files:

As a reminder - this isn't "Bad", it's just not optimal (response time of 50 seconds vs 1 second), and if you scale that kind of behaviour by many users with many datasets, things could definitely get hairy for all users of the system. Hence - use the XSA Cache.

As a final point, with the XSA Cache being in the database the standard range of performance optimisations are open to us - indexing being the obvious one. No indexes are built against the XSA Cache table by default, which is fair enough since OBIEE has no idea what the key columns on the data are, and the point of mashups is less to model and optimise the data but to just get it up there in front of the user. So you could index the table if you knew the key columns that were going to be filtered against, or you could even put it into memory (assuming you've licensed the option).

The MoS document referenced above also includes further performance recommendations for XSA, including the use of RAM Disk for XSA cache metadata files, as well as the managed server temp folder

External Subject Areas are great functionality, but be aware of the performance implications of not being able to push down common operations such as filtering and aggregation. Set up XSA Caching if you are going to be using XSA properly.

If you're interested in the direction of XSA and the associated Data Set Service, this slide deck from Oracle's Socs Cappas provides some interesting reading. Uploading Excel files into OBIEE looks like just the beginning of what the Data Set Service is going to enable!

New in Big Data Discovery 1.2 is the addition of BDD Shell, an integration point with Python. This…