This is the final article in a series documenting an exercise that we undertook for a client recently. Currently running an Oracle-based datawarehouse platform, the client asked for our help in understanding what a future ETL and reporting platform could look like, given the current landscape of tools available. You can read the background to the project, how we developed prototype code, deployed it to Amazon, and evaluated tools for analysing the data.

Whilst the client were generally aware of new technologies, they wanted a clear understanding of what these looked like in practice. Is it viable, as is being touted, to offload ETL entirely to open-source tools? Could they do this, without increasing their licensing costs?

The client are already well adopted to newer technologies, running their entire infrastructure on the Amazon Web Services (AWS) cloud. Given this usage of AWS, our investigation was based around deployment of the Elastic Map Reduce (EMR) Hadoop platform. Many of the findings made during the investigation are as applicable to other Hadoop platforms though, including CDH running on Oracle's Big Data Appliance.

We isolated a single process within the broader part of the client's processing estate for exploration. The point of our study was not less to implement this specific piece of functionality in the most optimal way, but to understand how in general processing would look on another platform in an end-to-end flow. Before any kind of deployment into Production of this design there would be further iterations, particularly around performance. These are discussed further below.

Overview of the Solution

The source data landed in Amazon S3 (similar in concept to HDFS), in CSV format, once per hour. We loaded each file, processed it to enrich it with reference data, and wrote it back to S3.

The enriched data was queried directly, with Presto, and also loaded into Redshift for querying there.

Oracle's Data Visualization Desktop was used as the front end for querying. 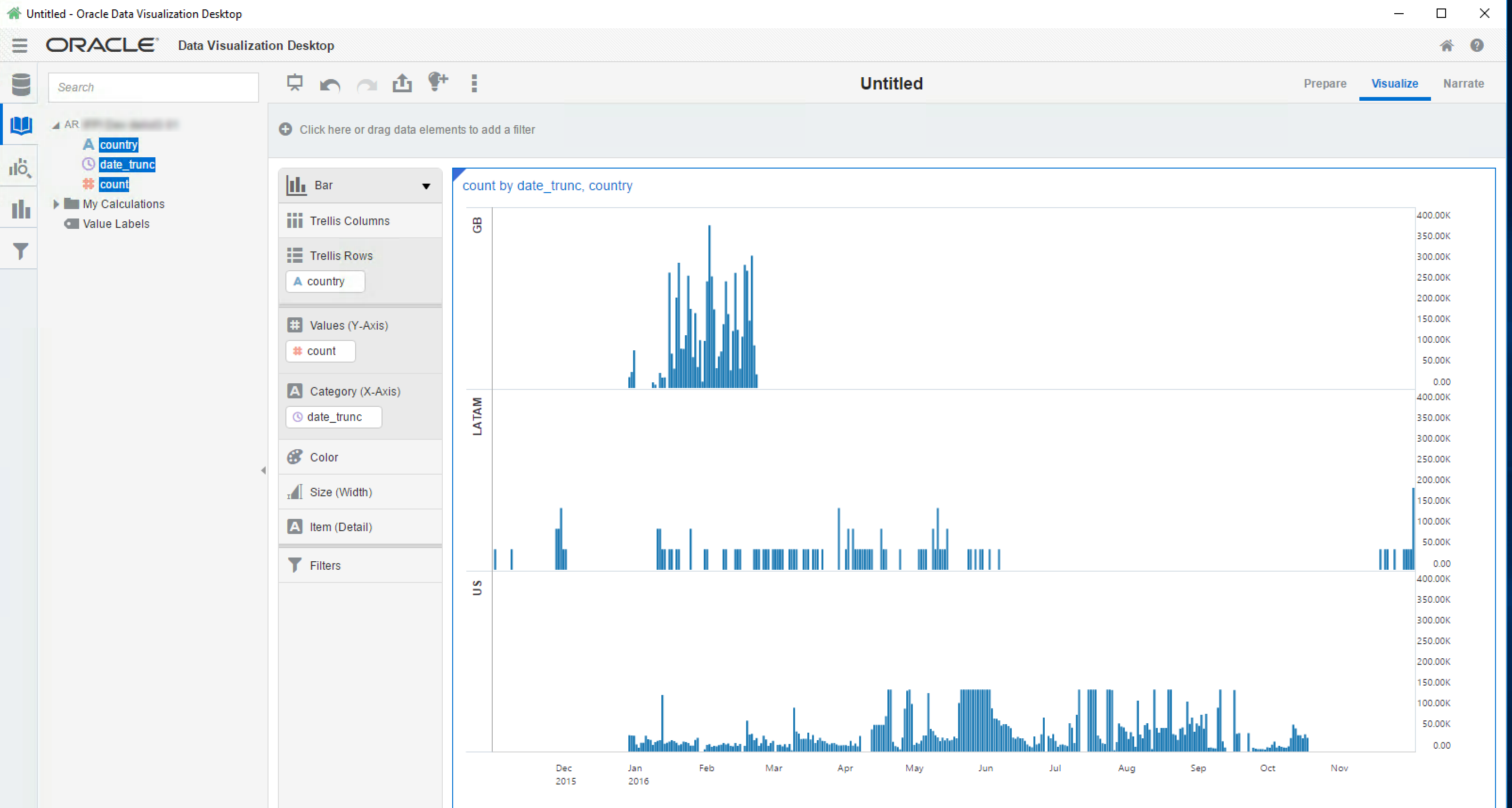 In this solution we have taken advantage of the decoupling of storage from compute. This is a significant advantage that cloud technology brings.

Moving existing workloads to the cloud is not just a case of provisioning servers running in someone else's data centre to perform the same work as before. To truly benefit (dare I say, leverage) from the new possibilities, it makes sense to re-architect how you store your data and perform processing on it.

As well as the benefit of cloud technology, we can see that we don't even need an RDBMS for much of this enrichment and transformation work. Redshift has proved to be useful for interactive analysis of the data, but the processing of the data that would typically get done within an RDBMS (with associated license costs) can instead be done on technology such as Spark.

The world of data and analytics is changing, and there are some interesting points that this project raised, which I discuss below.

The client for whom we carried out this work are already cloud 'converts', running their entire operation on AWS already. They're not alone in recognising the benefits of Cloud, and it's going to be interesting to see the rate at which adoption continues to occur elsewhere, particularly in the Oracle market as they ramp up their offerings.

The Cloud is of course a big deal nowadays, whether in the breathless excitement of marketing talk, or the more gradual realisation amongst more technical folk that The Cloud brings some serious benefits. There are three broad flavours of Cloud - Infrastructure, Platform, and Software (IaaS, PaaS, SaaS respectively):

Cloud brings benefits - but also greater subtleties to our solutions. Instead of simply provisioning one or more servers on which to hold our data and process it, we start to unpick this into separate components. In the context of this study, we have:

Innovation vs Execution (or, just because you can, doesn't mean you should)

The code written during this exercise could, with a bit of tidying up, be run in Production. As in, it does the job that it was built to do. We could even expand it to audit row counts in and out, report duff data, send notifications when complete. What about the next processing requirement that comes in? More bespoke code? And more? At some point we'd probably end up refactoring a whole bunch of it into some kind of framework. Into that framework we'd obviously want good things like handling SCDs, data lineage, and more. Welcome to re-inventing the in-house ETL wheel. Whether Spark jobs nowadays, PL/SQL ten years ago, or COBOL routines a decade before that - doing data processing at a wider scale soon becomes a challenge. Even with the best coders (or 'engineers' as they're now called) in the world, you're going to end up with a bespoke platform that's relient on inhouse skills to support and maintain. That presumes of course that you can find the relevant skills in the market to write all the processing and transformations that you need - and support them, of course. As you aquire new staff, they'll need to be trained on your code base - and suddenly the "free" technology platform isn't appearing so cheap.

Before you shoot me down for a hyperbolic strawman argument, there is an important dichotomy to draw here, between innovation and execution. Applicable to the world of big data in general, it is a useful concept spelt out in the Oracle Information Management & Big Data Reference Architecture. For data to provide value, it doesn't have to land straight away into the world of formalised development processes, Production environments, and so on. A lot of the time you will want to 'poke around' with it, to explore it -- to innovate. Of the technology base out there, you may not know which tool, or library, is going to yield the best results. This is where the "discovery lab" comes in, and where the type of hand-cranked Spark coding that I've demonstrated sits:

Sometimes, work done in innovation is complete once it's done. As in, it has answered the required business question, and provided its value. But a lot of the time though it will simply establish and prove the process that is to be applied to the data, that then needs taking through to the execution layer. This is often called, in an abuse of the English language, "productionisation" or "industrialisation". This is where the questions of code maintenance and scalability need to be seriously considered. And this is where you need a scalable and maintainable approach to the design, management, and orchestration of your data processing - which is exactly what a tool like Oracle Data Integrator (ODI) provides.

ODI is the premier DI tool on the market, with good support for "big data" technologies, including the ability to generate Spark code to perform transformation. It can be deployed to run on Amazon's EMR, as illustrated here, as well as Oracle's Cloud platform. As can be seen from this presentation from Oracle Open World in September 2016, there's additional capabilities coming including around Kafka, Spark Streaming, and Cassandra.

Another route to examine, alongside ODI, is the ecosystem within AWS itself around code execution and orchestration with tools such as Lambda, Data Pipeline, and Simple Workflow Service. There's also AWS Glue, which like Athena was announced at re:Invent 2016. This promises three key things of crucial importance here:

A single vendor for your IT platform gives you "one throat to choke" when it comes to support, which is usually a good thing. But if that vendor's platform is closed and proprietary it makes leaving it, or even just making use of alternative tools with it, difficult. One of the evangelical claims made about the new world of open source software is that the proliferation of open standards would spell an end to vendor lockin. I was interested to see during the course of this exercise a few examples where the big vendors subtly pushed you towards their own tool of choice, or away from an alternative.

For example, Amazon EMR makes available Presto as part of the default build, but to run the latest version of Impala you'd have to install it yourself. Whilst it is possible to install it yourself, of course, this added friction makes it less likely that people will. This friction increases when we consider that the software usually needs installing - and configuring - across multiple the nodes of the Hadoop cluster. Given an open field of tools all purporting to do the same or similar things, any impedance to using one over the other will count. The same argument could be made for the CDH distribution, in which Impala is front and center, and deploying Presto or Drill would be a manual exercise. Again, yes, installing it may be relatively trivial - but manual download and deployment across a cluster is never going to win out over a one-click deploying from a centralised management console.

This is a long way from any kind of vendor lockin, but it is worth bearing in mind that walls, albeit thin ones, are being built around these various gardens in the Hadoop ecosystem.

I hope you've found this series of article useful. You can find a list of them below. In the meantime, please do get in touch if you'd like to find out more about how Rittman Mead can help you on your data and analytics journey!

You can listen to a discussion of this project, along with other topics including OBIEE, in an episode of the Drill to Detail podcast here.