In my previous blog post I introduced Spark Streaming and how it can be used to process 'unbounded' datasets. The example I did was a very basic one - simple counts of inbound tweets and grouping by user. All very good for understanding the framework and not getting bogged down in detail, but ultimately not so useful.

We're going to stay with Twitter as our data source in this post, but we're going to consider a real-world requirement for processing Twitter data with low-latency. Spark Streaming will again be our processing engine, with future posts looking at other possibilities in this area.

Twitter has come a long way from its early days as a SMS-driven "microblogging" site. Nowadays it's used by millions of people to discuss technology, share food tips, and, of course, track the progress of tea-making. But it's also used for more nefarious purposes, including spam, and sharing of links to pirated material. The requirement we had for this proof of concept was to filter tweets for suspected copyright-infringing links in order that further action could be taken.

The environment I'm using is the same as before - Spark 2.0.2 running on Docker with Jupyter Notebooks to develop the code (and this article!). You can download the full notebook here.

The inbound tweets are coming from an Apache Kafka topic. Any matched tweets will be sent to another Kafka topic. The match criteria are:

We'll also use a separate Kafka topic for audit/debug purposes to inspect any non-matched tweets.

As well as matching the tweet against the above conditions, we will enrich the tweet message body to store the identified artist/album/track to support subsequent downstream processing.

The final part of the requirement is to keep track of the number of inbound tweets, the number of matched vs unmatched, and for those matched, which artists they were for. These counts need to be per batch and over a window of time too.

Getting Started - Prototyping the Processing Code

Before we get into the meat of the streaming code, let's take a step back and look at what we're wanting the code to achieve. From the previous examples we know we can connect to a Kafka topic, pull in tweets, parse them for given fields, and do windowed counts. So far, so easy (or at least, already figured out!). Let's take a look at nub of the requirement here - the text matching.

If we peruse the BBC Radio 1 Charts we can see the popular albums and artists of the moment (Grant me a little nostalgia here; in my day people 'pirated' music from the Radio 1 chart show onto C90 cassettes, trying to get it without the DJ talking over the start and end. Nowadays it's done on a somewhat more technologically advanced basis). Currently it's "Little Mix" with the album "Glory Days". A quick Wikipedia or Amazon search gives us the track listing too:

A quick twitter search for the first track title gives us this tweet - I have no idea if it's legit or not, but it serves as an example for our matching code requirements:

Using the Twitter developer API I can retrieve the JSON for this tweet directly. I'm using the excellent Paw tool to do this.

From this we can get the text element:

But - we need to make sure we've matched two of the three types of metadata (artist/album/track), so we need to know which it is that we've matched in the text. We also need to handle variations in text for a given match (such as misspellings etc).

What I came up with was this:

We could then take the test string from above and test it:

as well as making sure that variations in naming were also correctly picked up and tagged:

With the text matching figured out, we also needed to address the other requirements:

In the old days retweets were simply reposting the same tweet with a RT prefix; now it's done as part of the Twitter model and Twitter clients display the original tweet with the retweeter shown. In the background though, the JSON is different from an original tweet (i.e. not a retweet).

Because we all know how "careful" Trump is about not being recorded when he's not aware of it. #BillyBush #GoldenGate 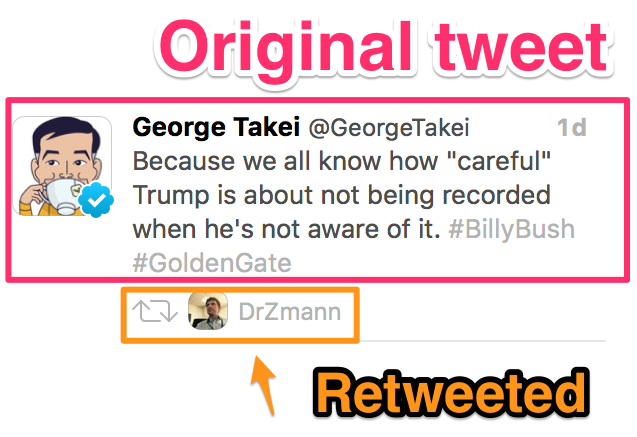 So retweets have an additional set of elements in the JSON body, under the retweeted_status element. We can pick this out using the get method as seen in this code snippet, where tweet is a Python object created from a json.loads from the JSON of the tweet:

Contains a URL, and URL is not on Whitelist

Twitter are very good to us in the JSON they supply for each tweet. Every possible attribute of the tweet is encoded as elements in the JSON, meaning that we don't have to do any nasty parsing of the tweet text itself. To find out if there are URLs in the tweet, we just check the entities.urls element, and iterate through the array if present.

The URL itself is again provided to us by Twitter as the expanded_url within the urls array, and using the urlsplit library as I did previously we can extract the domain:

With the domain extracted, we can then compare it to a predefined whitelist so that we don't pick up tweets that are just linking back to sites such as Spotify, iTunes, etc. Here I'm using the Python set type and issubset method to compare the list of domain(s) that I've extracted from the tweet into the url_info list, against the whitelist:

With me so far? We've looked at the requirements for what our stream processing needs to do, and worked out the prototype code that will do this. Now we can jump into the actual streaming code. You can see the actual notebook here if you want to try this yourself.

As well as Spark libraries, we're also bringing in the KafkaProducer library which will enable us to send messages to Kafka. This is in the kafka-python package. You can install this standalone on your system, or inline as done below.

To inspect the Kafka topics as messages are sent use:

This is the main processing code. It implements all of the logic described in the requirements above. If a processing condition is not met, the function returns a negative code and description of the condition that was not met. Errors are also caught and returned.

You can see a syntax-highlighted version of the code in the notebook here.

As well as processing inbound tweets, it performs counts of:

The code is commented inline to explain how it works. You can see a syntax-highlighted version of the code in the notebook here.

From the stdout of the job we can see the simple counts of inbound and output splits, both per batch and accumulating window:

The details of identified artists within tweets is also tracked, per batch and accumulated over the window period (6 hours, in this example)

The matched Kafka topic holds a stream of tweets in JSON format, with the discovered metadata (artist/album/track) added. I'm using the Kafka console consumer to view the contents, parsed through jq to show just the tweet text and metadata that has been added.

On our Kafka topics outbound we can see the non-matched messages. Probably you'd disable this stream once the processing logic was finalised, but it's useful to be able to audit and validate the reasons for non-matches. Here a retweet is ignored, and we can see it's a retweet from the RT prefix of the text field. The -1 is the return code from the process_tweets function denoting a non-match:

In this article we've built on the foundations of the initial exploration of Spark Streaming on Python, expanding it out to address a real-world processing requirement. Processing unbounded streams of data this way is not as complex as you may think, particularly for the benefits that it can yield in reducing the latencies between an event occuring and taking action from it.

We've not touched on some of the more complex areas, such as scaling this up to multiple Spark nodes, partitioned Kafka topics, and so on - that's another [kafka] topic (sorry...) for another day. The code itself is also rudimentary - before moving it into Production there'd be some serious refactoring and optimisation review to be performed on it.

You can find the notebook for this article here, and the previous article's here.

If you'd like more information on how Rittman Mead can help your business get the most of out its data, please do get in touch!

Analyse Your Data on the Go with Oracle Synopsis App

Getting Started with Spark Streaming, Python, and Kafka