12.2, the latest Oracle database release provides a whole set of new features enhancing various aspects of the product including JSON support, Auto-List Partitioning and APEX news among others.
One of the biggest news in the Data Warehousing / Analytics area was the introduction of the Analytic Views, that as per Oracle's definition are

If you are on rush, here is an abstract of what you'll find in this looooong blog post:

Metadata modeling can now be done directly in the database using Analytic Views, providing to end users a way of querying database objects without needing a knowledge of joining conditions, aggregation functions or order by clauses.
This post will guide you through the creation of an analytic view that replicates a part of a OBIEE's Sampleapp business model. The latest part of the post is dedicated to understanding the usage of analytic views and the benefits for end users especially in cases when self-service BI tools are used. 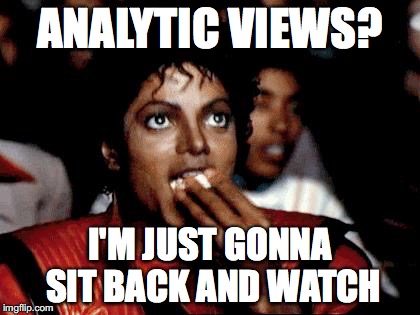 If you are still around and interested in the topic please take a drink and sit comfortably, it will be a good journey.

What are then the Analytics Views in detail? How are they going to improve end user's ability in querying data?

To answer above question I would take a step back. Many readers of this blog are familiar with OBIEE and its core: the Repository. The repository contains the metadata model from the physical sources till the presentation areas and includes the definition of:

This allows end users to just pick columns from a Subject Area and display them in the appropriate way without needing to worry about writing SQL or knowing how the data is stored. Moreover definitions are held centrally providing the famous unique source of truth across the entire enterprise.

The wave of self-service BI tools like Tableau or Oracle's Data Visualization Desktop provided products capable of querying almost any kind of data sources in a visual and intuitive way directly in the end user hands. An easy and direct access to data is a good thing for end user but, as stated above, requires knowledge of the data model, joins and aggregation methods.
The self-service tools can slightly simplify the process by providing some hints based on column names, types or values but the cruel reality is that the end-user has to build the necessary knowledge of the data source before providing correct results. This is why we've seen several times self-service BI tools being "attached" to OBIEE: get corporate official data from the unique source of truth and mash them up with information coming from external sources like personal Excel files or output of Big Data processes.

Analytic Views (AV) take OBIEE's metadata modeling concept and move it at database level providing a way of organizing data in a dimensional model so it can be queried with simpler SQL statements.
The Analytical Views are standard views with the following extra options:

Analytics views are created with a CREATE ANALYTIC VIEW statement, some privileges need to be granted to the creating user, you can find the full list in Oracle's documentation.

Every analytical view is composed by the following metadata objects:

With all the above high level concepts in mind it's now time to try how Analytical Views could be used in a reporting environment.

For the purpose blog post I used Oracle's 12.2.0.1 database Docker image, provided by Gerald Venzl, the quickest way of spinning up a local instance. You just need to:

The detailed parameters definition can be found in the GitHub repository. You can then connect via sqlplus to your local instance by executing the standard

The password is generated automatically during the first run of the image and can be found in the logs, look for the following string

Once the database is created it's time to set the goal: I'll try to recreate a piece of the Oracle's Sampleapp RPD model in the database using Analytic Views.

In this blog post I'll look in the 01 - Sample App business model and specifically I'll try to replicate the logic behind Time, Product and the F0 Sales Base Measures using Analytic Views. 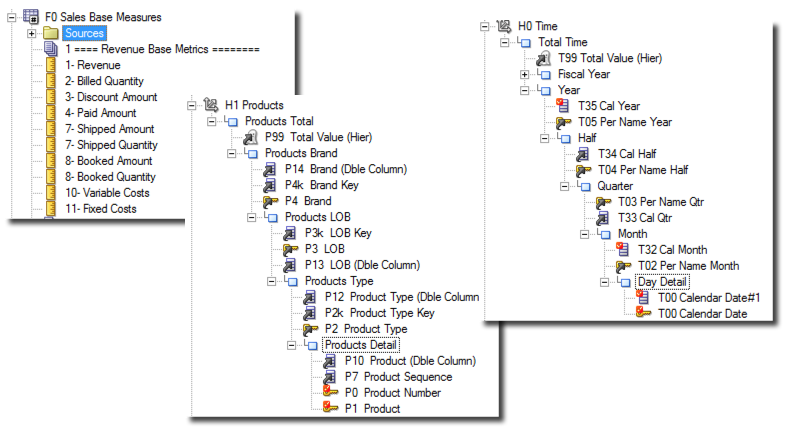 The Sampleapp's D1 - Products (Level Based Hierarchy) is based on two logical table sources: SAMP_PRODUCTS_D providing product name, description, LOB and Brand and the SAMP_PROD_IMG_D containing product images. For the purpose of this test we'll keep our focus on SAMP_PRODUCTS_D only.
The physical mapping of Logical columns is shown in the image below.

The first piece we're going to build is the attribute dimension, where we'll be defining attributes and levels. The mappings in above image can "easily" be translated into an attributes with the following SQL.

The dimension definition is not complete with only attribute declaration, we also need to define the levels. Those can be taken from OBIEE's hierarchy 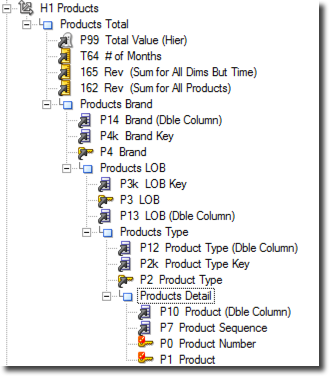 For each level we can define:

There is an additional DETERMINES line in above sql for each level apart from Brand, this is how we can specify the relationship between level keys. If we take the Product_LOB example, the DETERMINES(P4k_Brand) defines that any LOB in our table automatically determines a Brand (in OBIEE terms that LOB is a child of Brand).

Next step is defining a hierarchy on top of the attribute dimension D1_PRODUCTS defined above. We can create it just by specifying:

which in our case becomes

When looking into the hierarchy Product_hier we can see that it's creating an OLAP-style dimension with a row for each member at each level of the hierarchy and extra fields like DEPT, IS_LEAF and HIER_ORDER

The columns contained in Product_hier are:

This is the default behaviour, however in our case is not happening since we set the DETERMINES(P3k_LOB,P4k_Brand) in the attribute dimension definition. We Specified that Brand ([10001]) and LOB ([1001]) can automatically be inferred by the Product Type so there is no need to store those values in the member key. We can find the same setting in OBIEE's Product Type logical level

The basic D0 Dim Date can be built starting from the table SAMP_TIME_DAY_D following the same process as above. Like in OBIEE, some additional settings are required when creating a time dimension:

Taking into consideration the additional settings, the Dim Date column mappings in above image can be translated in the following attribute dimension SQL definition.

You may have noticed a different mapping of keys, member names and order by attributes. Let's take the CAL_MONTH as example. It's defined by two columns

PER_NAME_MONTH in the YYYY / MM format could be also used for ordering, but most of the times end user requests months in the MM / YYYY format. Being able to set a ordering column different from the member name allows us to properly manage the hierarchy. 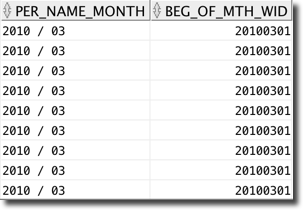 Time hierarchy follows the same rules as the product one, no additional settings are required.

Within analytical views definition a materialized view can be defined in order to store aggregated values. This is a similar to OBIEE's Logical Table Source setting for aggregates.

For the purpose of the post I'll use SAMP_REVENUE_F which is one of the sources of F0 Sales Base Measures in Sampleapp. The following image shows the logical column mapping.

The above mappings can be translated in the following SQL

Some important parts need to be highlighted:

After the analytic view definition, it's time to analyse what benefits end users have when using them. We are going to take a simple example: a query to return the Revenue and Billed Qty per Month and Brand.

Using only the original tables we would have the following SQL

The above SQL requires the knowledge of:

Even if this is an oversimplification of the analytic view usage you can already spot that some knowledge of the base data structure and SQL language is needed.

Using the analytic views defined above, the query can be written as

As you can see, there is a simplification of the SQL statement: no more aggregation, joining conditions and group by predicates are needed. All the end-user has to know is the analytical view name, and the related hierarchies that can be used.

The additional benefit is that if we want to change the level of granularity of the above query we just need to change the WHERE condition. E.g. to have the rollup per Year and LOB we just have to substitute

without touching granularity, group by and order by statements.

At the beginning of my blog post I wrote that Analytic Views could be useful when used in conjunction with self-service BI tools. Let's have a look at how the end user journey is simplified in the case of Oracle's Data Visualization Desktop.

Without AV the end-user had two options to source the data:

Both options require a SQL and joining conditions knowledge in order to being able to present correct data. Using Analytic Views the process is simplified. We just need to create a new source pointing to the database where the analytic views are sitting.
Next step is retrieve the necessary columns from the analytic view. Unfortunately analytic views are not visible from DVD object explorer (only standard table and views are shown) 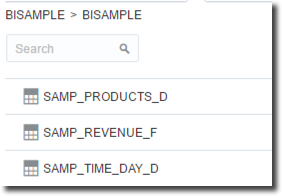 We can however specify with a simple SQL statement all the informations we need like Time and Member Slice, the related levels and the order in hierarchy.

You may have noted that I'm not specifying any WHERE clause for level filtering: as end user I want to be able to retrieve all the necessary levels by just changing a filter in my DVD project. After including the above SQL in the datasource definition and amending the measure/attribute definition I can start playing with the analytic view data. 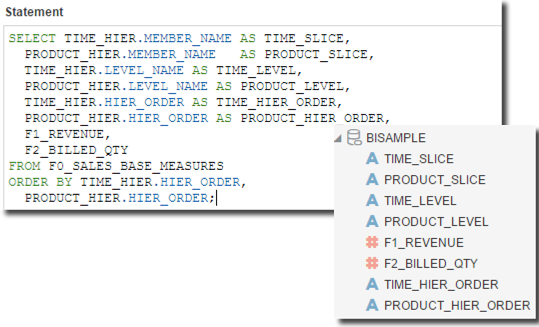 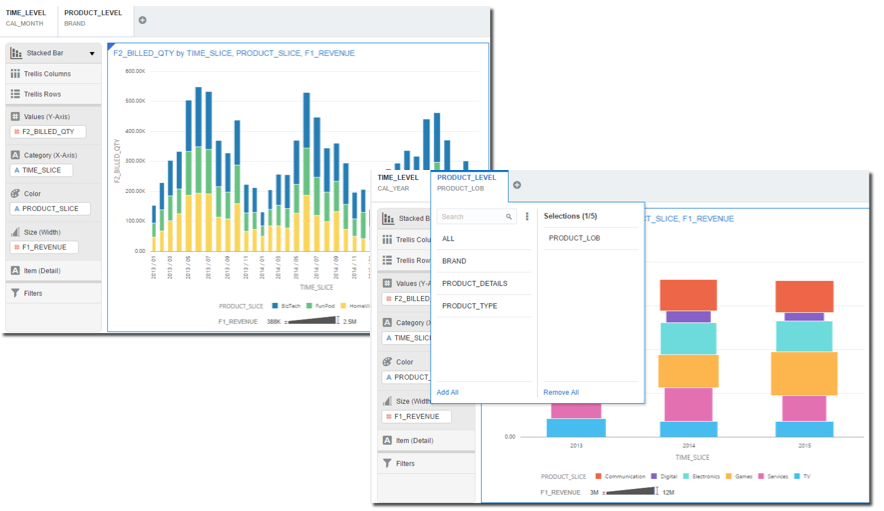 One particular to notice however is that all the data coming from various columns like date, month and year are "condensed" into a single VARCHAR column. In case of different datatypes (like date in the time dimension) this will prevent a correct usage of some DVD's capabilities like time series or trending functions. However if a particular type of graph is needed for a specific level, either an ad-hoc query or a casting operation can be used.

In this blog post we analysed the Analytic Views, a new component in Oracle Database 12.2 and how those can be used to "move" the metadata modeling at DB level to provide an easier query syntax to end-users.

Usually metadata modeling is done in reporting tools like OBIEE that offers additional set of features on top of the one included in analytic views. However centralized reporting tools like OBIEE are not present everywhere and, with the wave of self-service BI tools, analytic views represent a perfect method of enabling users not familiar with SQL to simply query their enterprise data.

If you are interested in understanding more about analytic views or metadata modeling, don't hesitate to contact us!
If you want to improve the SQL skills of your company workforce, check out our recently launched SQL for beginners training!