After my initial quick pass through Essbase under OAC here, this post looks at the data loading options available in more detail. I used the provided sample database ASOSamp.Basic, which first had to be created, as a working example.

Under the time-honoured on-prem install of Essbase, the sample applications were available as an install option – supplied data has to be loaded separately, but the applications / cubes themselves are installed as part of the process if the option is selected. This is not quite the same under OAC – some are provided in an easily installable format, but they are not immediately available out-of-the-box.

One of the main methods of cube creation in Essbase under OAC is via the Import of a specifically formatted Excel spreadsheet, and it is via the provision of downloadable pre-built ‘template’ spreadsheets that the sample applications are installed in this version.

After accessing the homepage of Essbase on OAC, download the provided cube creation template – this can be found under the ‘Templates’ button on the home page:

Return to the home page, and click Import. Choose the spreadsheet downloaded as Aggregate Storage Sample (ASO_Sample.xlsx) and click Deploy and Close.

This will effect all of the detail in the spreadsheet – create the application, create the cube, add dimensions / attribute dimensions and members to the outline, etc:

Because the data file is separate from the spreadsheet, the next step is to uploaded this to OAC so that it is available for loading: back on the home page, select the newly-created ASOSamp.Basic (note: not ASOSamp.Sample as with on-prem), and click Files:

In the right-hand window, select the downloaded data file ASO_Sample_Data.txt and click the Upload button:

This will upload the file:

Once the file upload is complete, return to the home page. With the newly-created ASOSamp.Basic still selected, click Jobs:

Choose Data Load as the Job Type, and highlight the required Data File: 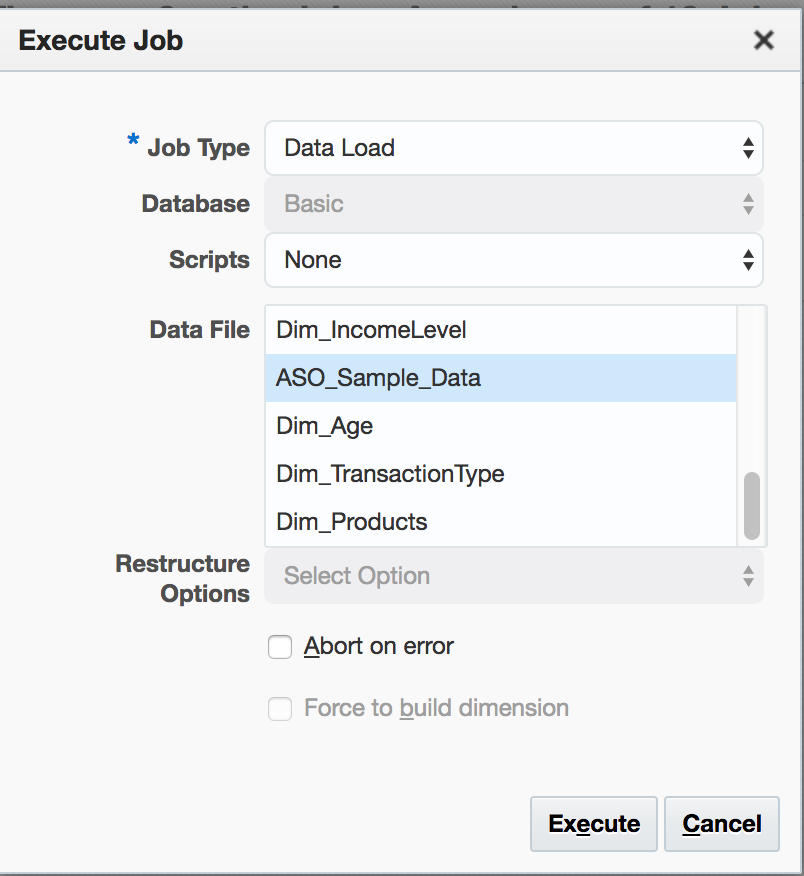 A new line will be added to the Job Monitor:

The current status of the job is shown – in this case, ‘in progress’ – and the screen can be refreshed.

Once complete, the Status field will show the completion state of the job, whilst the Job Details icon on the right-hand side provides more detail – in this case, confirming that 311,795 records were successfully loaded, and 0 rejected: 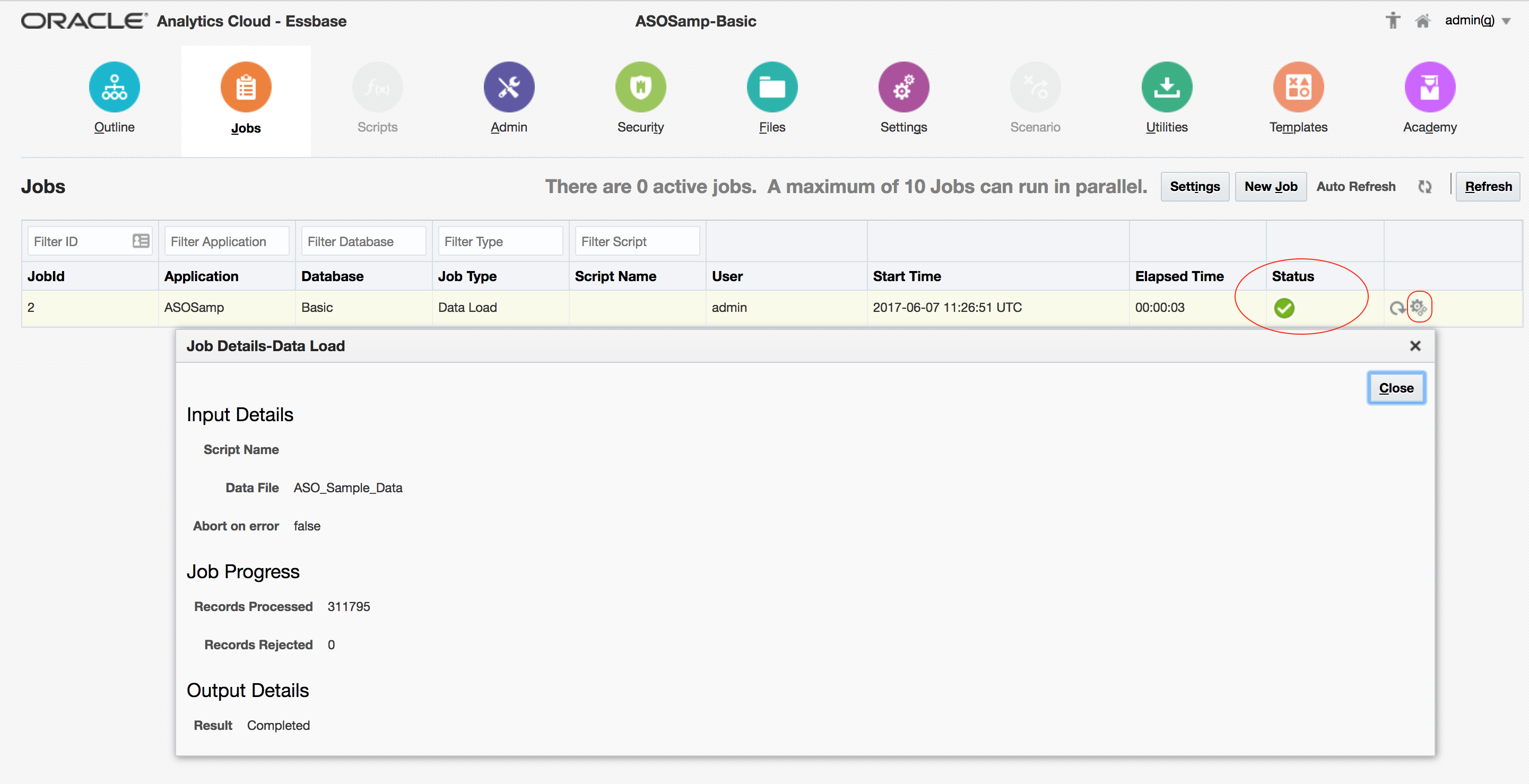 The success of the load is confirmed by a quick look in Smartview:

...which is familiar-looking: just what we would expect from a EAS export (MAXL: export database), which can of course just be loaded in a similar no-rules-file way in on prem.

Incidentally, this is different to the on-prem approach to ASOSamp.Sample where a ‘flat’, tab-delimited data file is provided for the sample data, along with a rules file that is required for the load: 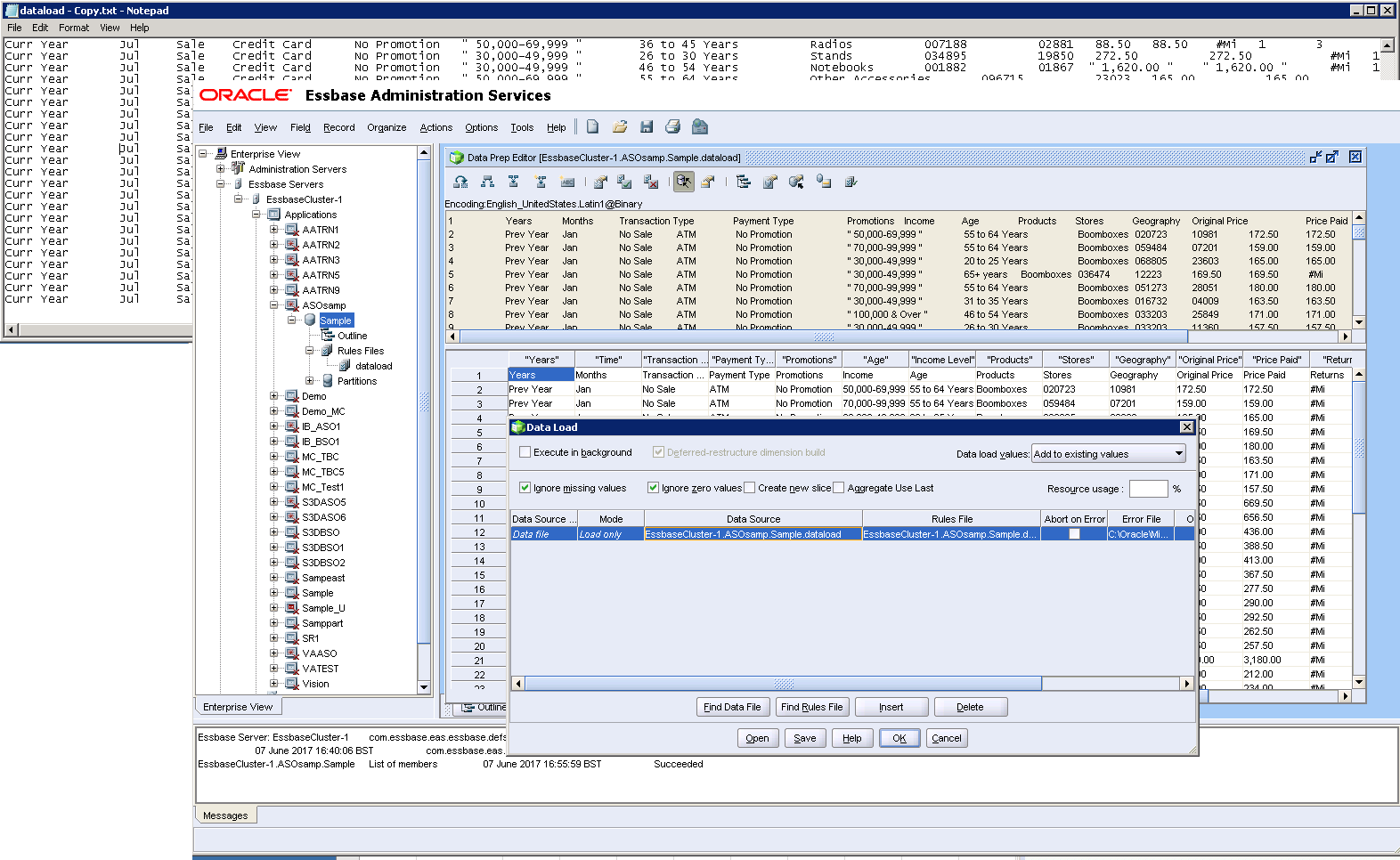 ...although the end-results are the same:

This ‘standard’ load works in overwrite mode – any new values in the file will be added, but any that exist already will be overwritten: running the load again and refreshing the Smartview report results in the same numbers confirms this.

This can be verified further by running with a changed data file: taking a particular node of data for the Units measure…

One of the constituent data values can be changed in a copy of the data file – in this example, one record (it doesn’t matter which for this purpose) can be increased – in this case, ‘1’ has been increased to ‘103’:

The amended file needs to be saved and uploaded to OAC as outlined above, and the load process repeated, this time using the amended file. After a successful load, the aggregated value on the test Smartview report has increased by the same 102:

So, how might we load the same sort of flat, tab delimited file of the like supplied as the on-prem ASOSamp.Sample data file ?

As above, files can be uploaded to OAC, so putting the dataload.txt data file from the on-prem release into OAC is straightforward. However, as you’d expect, attempting to run this as a load job without a rules file results in an error. 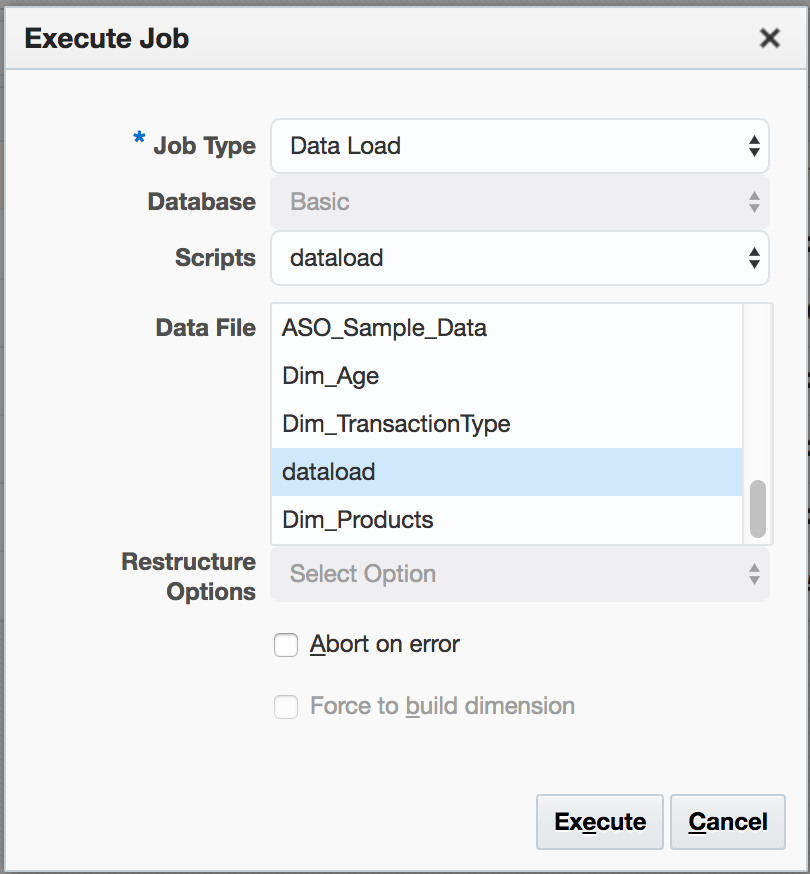 The job runs successfully, with the ‘Details’ overlay confirming the successful record count.

As with rules files generated by the Import facility, uploaded rules files can also be edited in text mode: 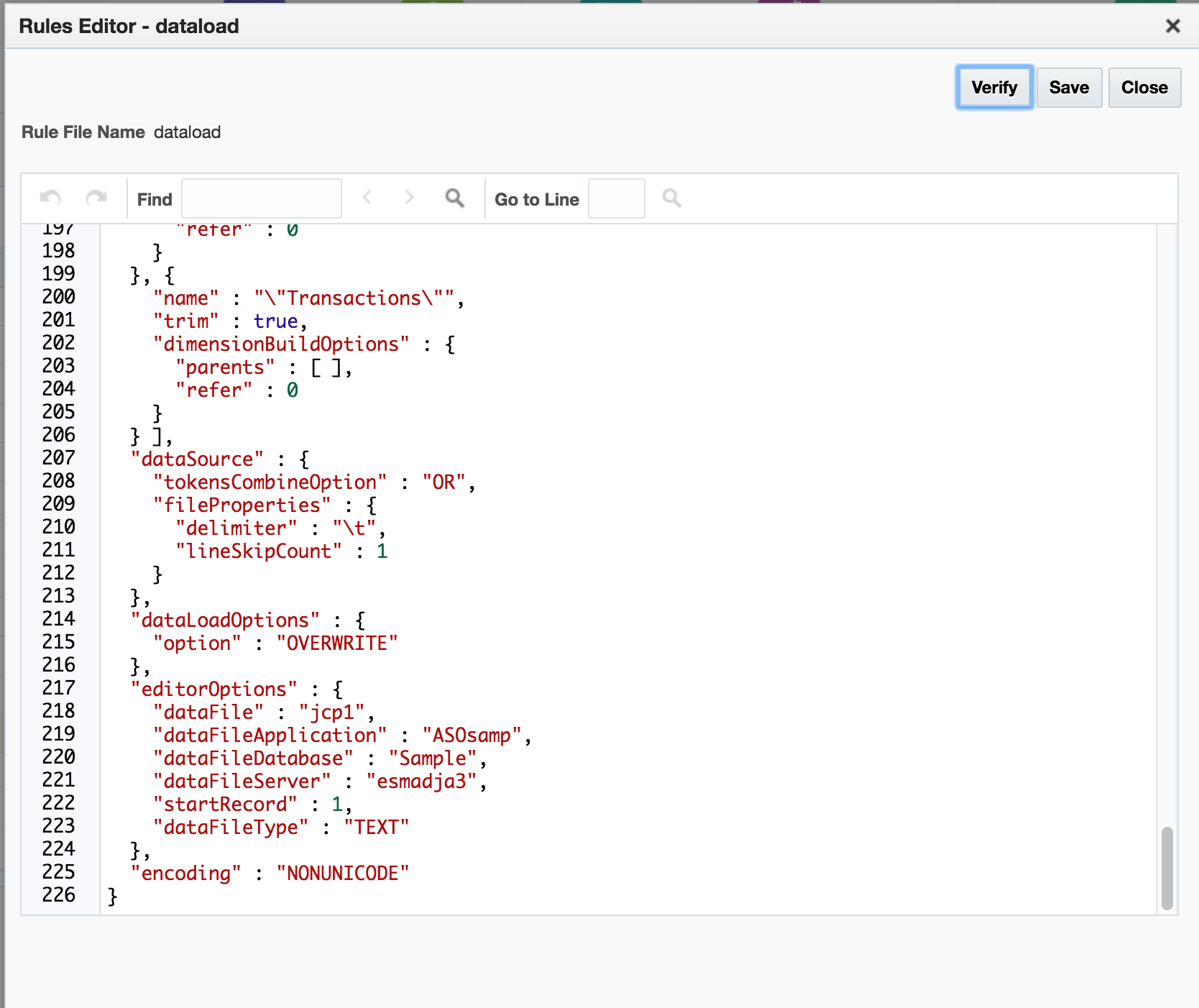 It would seem logical that changing the dataLoadOptions value at line 215 to a value other than OVERWRITE (eg ADD) might be a quick behavioural change for the load that would be easy to effect. However, making this change resulted in verification errors. Noting that the errors related to invalid dimension names, an attempt was made to verify the actual, unchanged rules file as uploaded…which also resulted in the same verification errors. So somewhat curiously, the uploaded on-prem rules file can be successfully used to load a corresponding data file, but (effectively) can’t be edited or amended.

The template spreadsheets used to build applications can also contain one or more data tabs. Unlike the OAC Jobs method or EssCS Dataload, the spreadsheet method gives you the option of a rules file AND the ability to Add (rather than overwrite) data:

Within OAC, this is actioned via the ‘Import’ function on the home page:

Note that we are retaining all data, and have the Load Data box checked. Checks confirm the values in the file are added to those already in the cube. 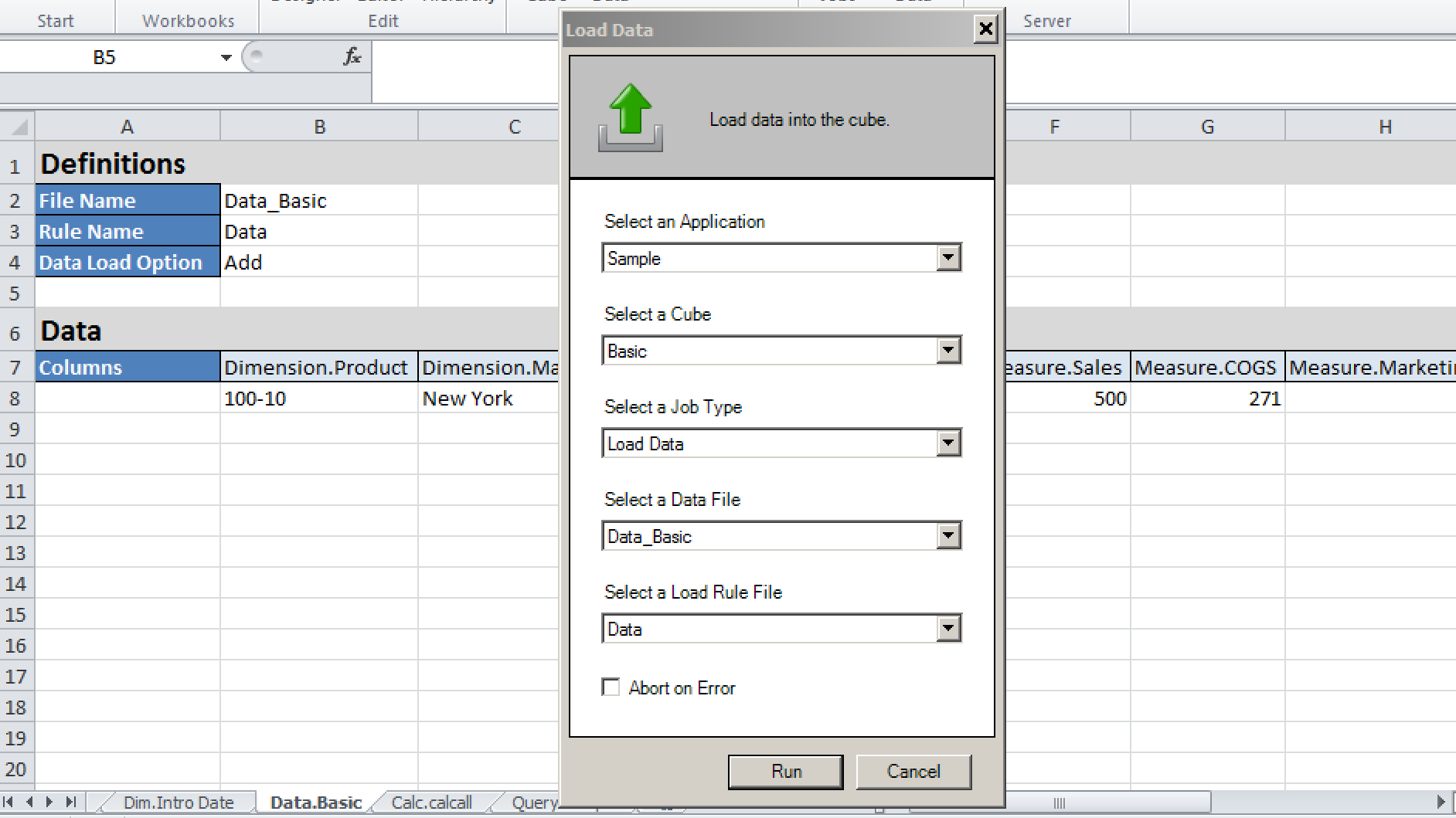 Note that unlike running this method under OAC, the rules file (which was created by the initial import as the Data tab existed in the spreadsheet at that point) has to be selected manually.

Once complete, an offer is made to view the Job Status Viewer (which can also be accessed from Cube Designer / View Jobs): 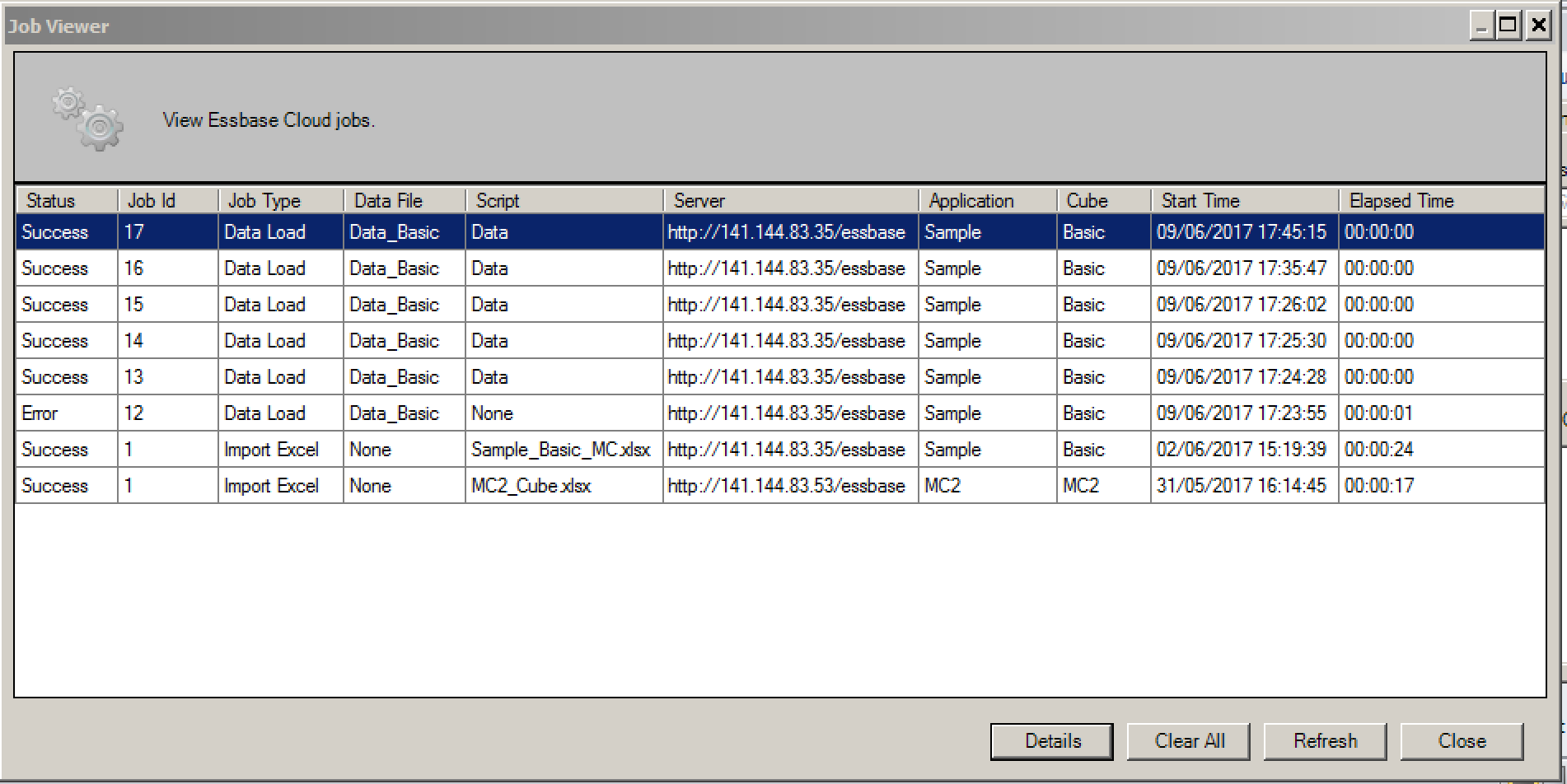 With further detail for each job also being available: 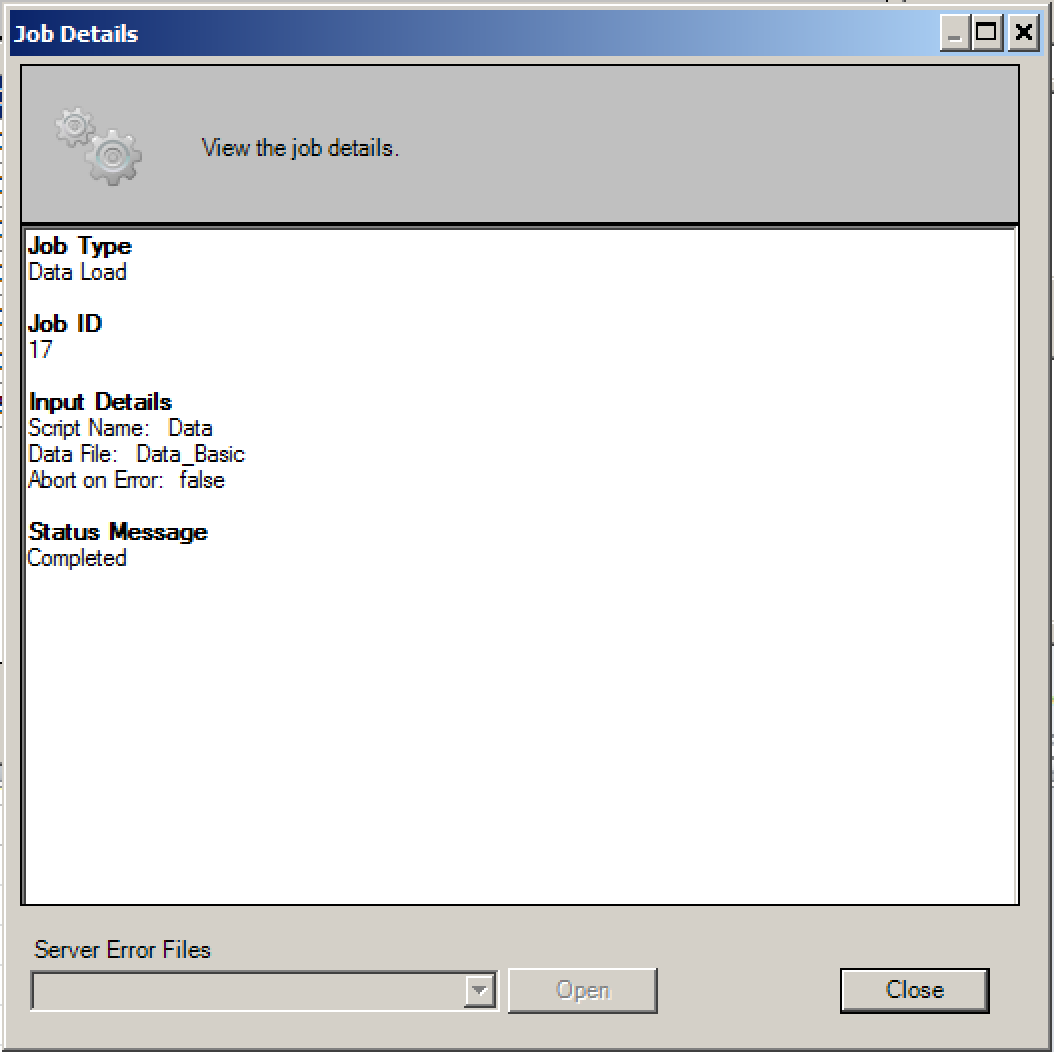 Use facilities to upload files

Given the ability to upload and run both data and rules files, the next logical step would be to script this for automated running. OAC contains a downloadable utility, the Command Line Tool (aka CLI , EssCS) which is a number of interface tools that can be run locally against an OAC instance of Essbase:

Running locally, a successful EssCS login effectively starts a session that then remains open for other EssCS commands until the session is closed with a logout command.

The login syntax suggests the inclusion of the port number in the URL, but I had no success with this…although it worked without the port reference:

As above, the connection is made and is verified by the successful running of another command (eg version), but the logout command produced an error. Despite this, the logout appeared successful – no other EssCS commands worked until a login was re-issued.

With EssCS installed and working, the Listfiles and Upload facilities become available. The function of these tools is pretty obvious from the name. Listfiles should be issued with at least arguments for the application and cube name: 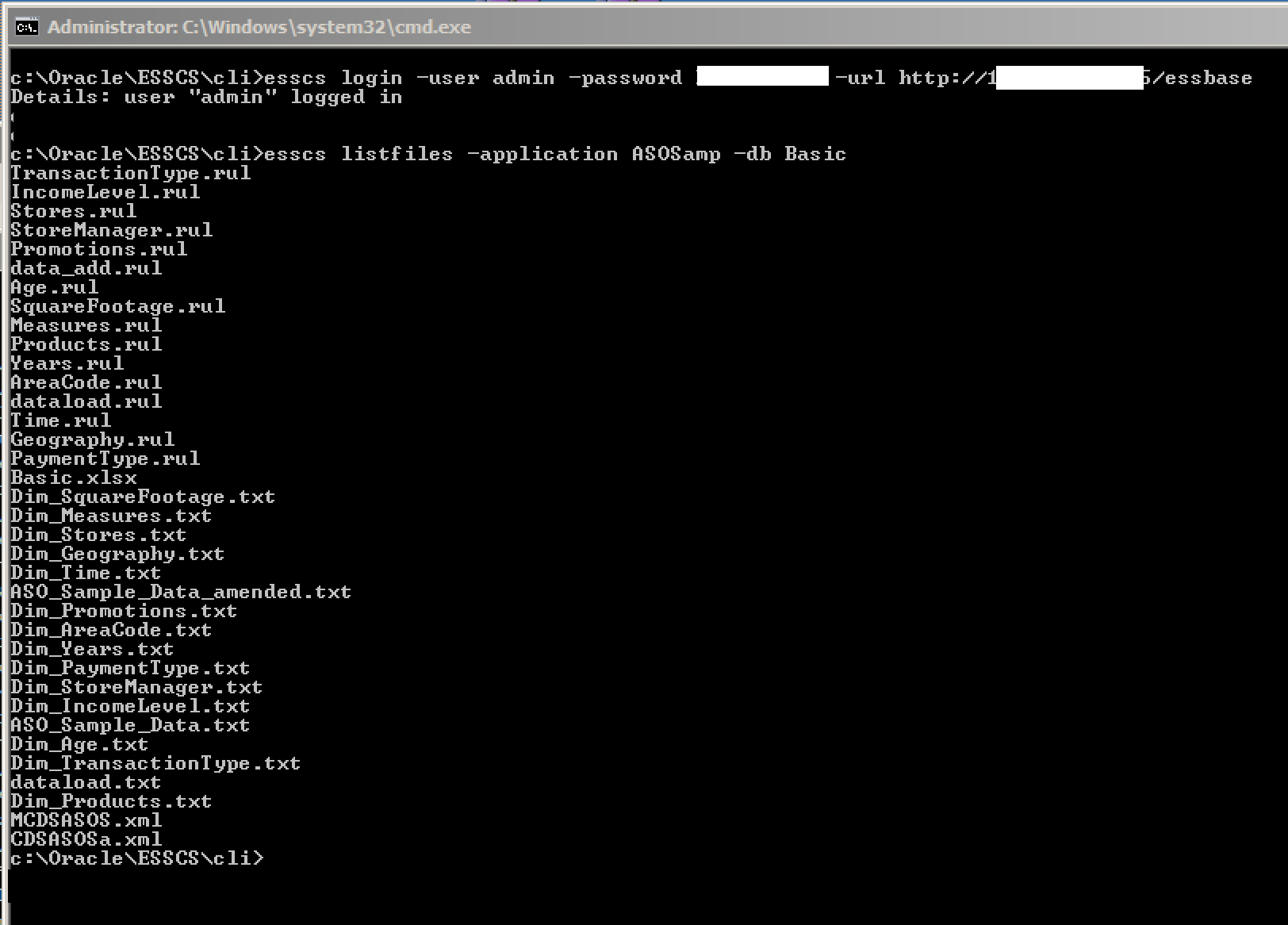 …although the file types is a fixed list – for example, you don’t seem to be able to use a wild card to pick up all spreadsheet files.

Whilst there is an Upload (and Download) facility, there does not seem to be the means to delete a remote file…which is a bit of an inconvenience, because using Upload to upload a file that already exists results in an error, and there is no overwrite option. The dataload.txt and dataload.rul files previously uploaded via the OAC front end were therefore manually deleted via OAC, and verified using Listfiles.

The files were then uploaded back to OAC using the Upload option of EssCS:

As you would expect, the files will then appear both in a Listfiles command and via OAC:

Note that the file list in OAC does not refresh with a browser page refresh or any ‘sort’ operation: use Refresh under Actions as above.

With the files now re-uploaded, the data can be loaded. EssCS also contains a DataLoad command, but unfortunately there appears to be no means to specify a rules file – meaning it would seem to be confined to overwrite, ‘export data’ style imports only:

A good point here is that the a DataLoad EssCS command makes an entry to the Jobs table, so success / record counts can be confirmed: 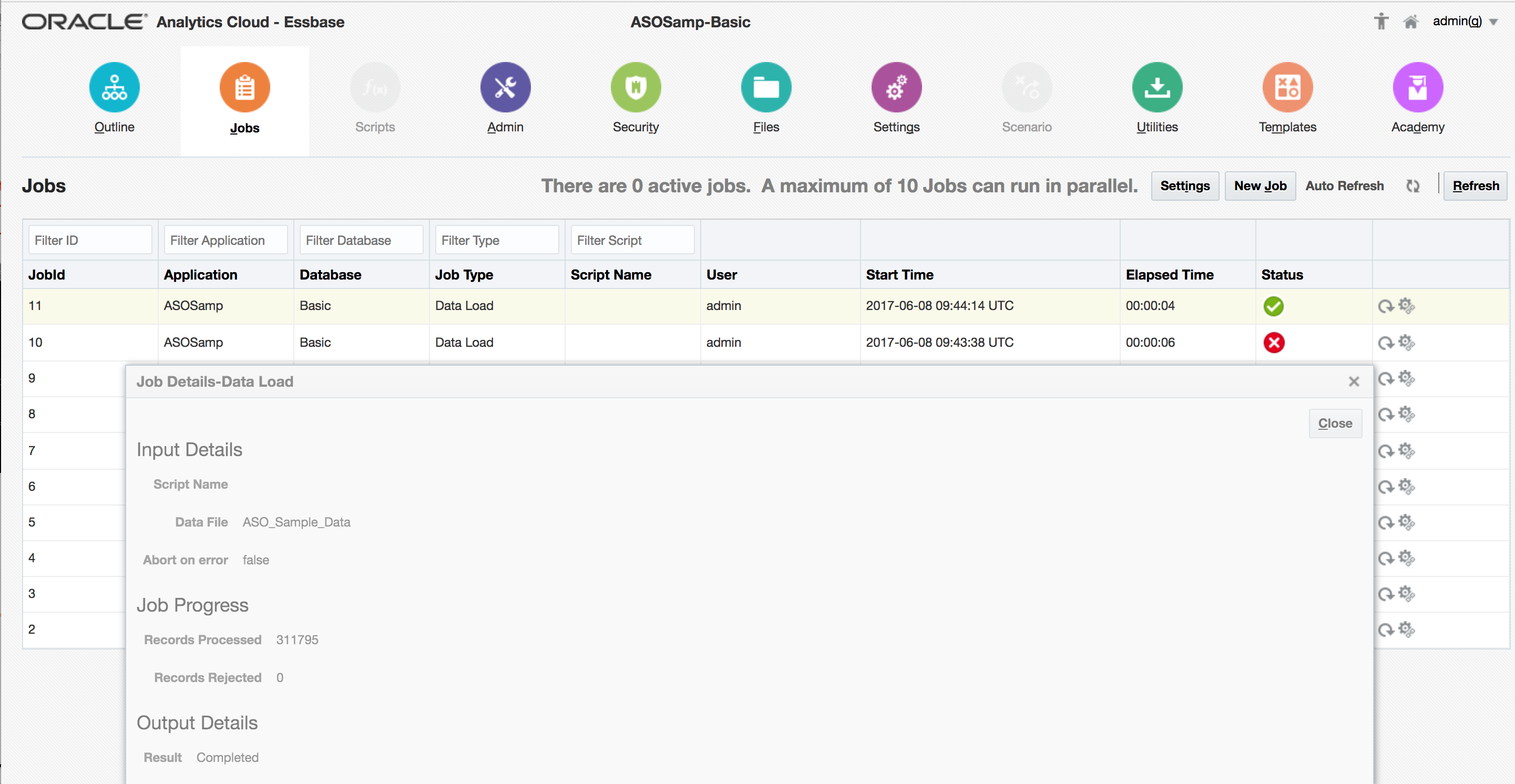 There are some minor differences between them, which may affect which you may wish to use for any particular scenario.

Arguably, given the availability of MAXL, there is a further custom method available as the actual data load can be effected that way too. This will be explored further in the next post that will start to consider how these tools might be used for real scenarios.