After some blogging silence due to project work and holidays, I thought it was a good idea to do a write-up about a problem I faced this week. One of the tasks I was assigned was to parse a set of JSON files stored in an Oracle 12.1 DB Table.

As probably all of you already know JSON (JavaScript Object Notation) is a lightweight data-interchange format and is the format used widely when talking of web-services due to its flexibility. In JSON there is no header to define (think CSV as example), every field is defined in a format like "field name":"field value", there is no "set of required columns" for a JSON object, when a new attribute needs to be defined, the related name and value can be added to the structure. On top of this "schema-free" definition, the field value can either be

Basically, when you start parsing JSON you feel like

The task assigned wasn't too difficult, after reading the proper documentation, I was able to parse a JSON File like

Parsing arrays is not very complex either, a JSON file like

Can be easily parsed using the NESTED PATH call

In case the Array contains nested objects, those can be parsed using the same syntax as before, for example, field4 and field5 of the following JSON

can be parsed with

...Where things got complicated

All very very easy with well-formatted JSON files, but then I faced the following

Basically the JSON file started including fields with names representing the Ids meaning an association like Product Id (1234) is member of Brand Id (8881). This immediately triggered my reaction: 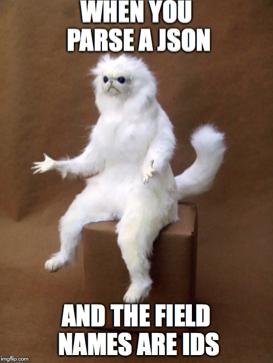 After checking the documentation again, I wasn't able to find anything that could help me parsing that, since all the calls were including a predefined PATH string, that in the case of Ids I couldn't know beforehand.

I then reached out to my network on Twitter

That generated quite a lot of responses. Initially, the discussion was related to the correctness of the JSON structure, that, from a purist point of view should be mapped as

basically going back to standard field names like productId and brandId that could be easily parsed. In my case this wasn't possible since the JSON format was aready widely used at the client.

Since a change in the JSON format wasn't possible, I needed to find a way of parsing it, few solutions were mentioned in the twitter thread:

All the above were somehow discarded since I wanted to try achieving a solution based only on existing database functions. Other suggestion included JSON_DATAGUIDE and JSON_OBJECT.GET_KEYS that unfortunately are available only from 12.2 (I was on 12.1).

The APEX_JSON package offers a series of procedures to parse JSON in a PL/SQL package, in particular:

You can already imagine how a combination of those calls can parse the JSON text defined above, let's have a look at the JSON again:

Note the p_path parameter set to field3[%d].field5 meaning that we want to extract the field5 from the nth row in field3. The rownumber is defined by p0=>i with i being the variable we use in our FOR loop.

The complete code is the following

Note that, in order to extract the BrandId we used

Three things to save from this experience. The first is the usage of JSON_TABLE: with JSON_TABLE you can parse well-constructed JSON documents and it's very easy and powerful.
The second: APEX_JSON useful package to parse "not very well" constructed JSON documents, allows iteration across elements of JSON arrays and object members.
The last, which is becoming every day more relevant in my career, is the importance of networking and knowledge sharing: blogging, speaking at conferences, helping others in various channels allows you to know other people and be known with the nice side effect of sometimes being able with a single tweet to get help solving problems you may face!

Looker for OBIEE Expert, and Introduction describing Looker concepts with the eyes of an OBIEE Expert.…

Making our way into Dremio

In an analytics system, we typically have an Operational Data Store (ODS) or staging layer; a performance layer or…