OBIEE 11.1.1.7 came out a few weeks ago, and recently we looked at Hadoop integration, one of the more interesting new features in this release. Over the next week I'll be looking in more detail at the changes around Essbase and EPM Suite integration, but today I'll be looking at a preview release of the upcoming OBIEE 11.1.1.7 SampleApp, provided courtesy of Philippe Lions and the BI Tech Demos team within Oracle. Philippe will be going through the new SampleApp release at the upcoming Rittman Mead BI Forum 2013 events in Atlanta and Brighton, but in the meantime lets take at what's likely to appear in this new OBIEE 11.1.1.7 demo showcase.

As with previous OBIEE 11g SampleApps, the dashboard front page lists out all of the content, and highlights in bright blue those areas that are new to this release. The 11.1.1.7 SampleApp is largely based on earlier releases to support the 11.1.1.5 and 11.1.1.6 OBIEE versions, with any new content either showing off 11.1.1.7 new features, or adding new functional areas to the SampleApp demo. 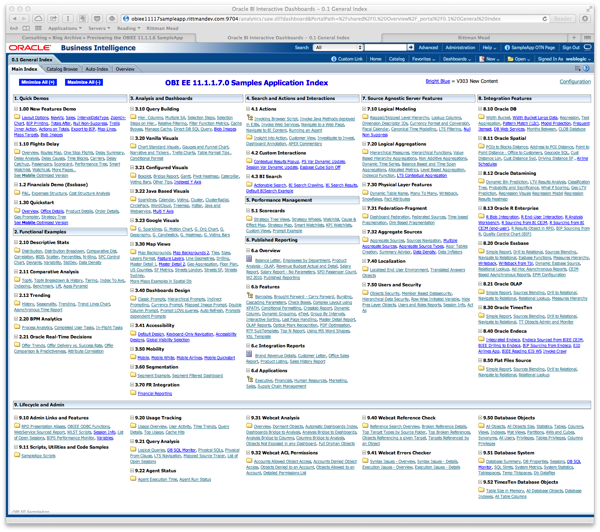 The best place to start looking is the New Features Demo dashboard, which highlights new 11.1.1.7 features such as performance tiles, 100% stacked bar charts and waterfall charts, on this first dashboard page: 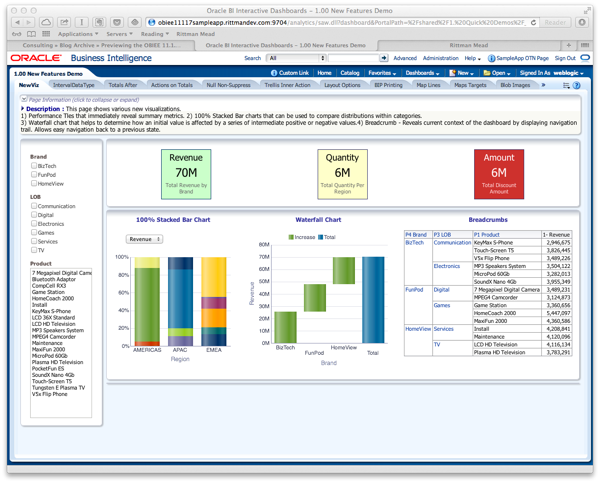 Totals within tables, pivot tables and other visualisations can now have action links associated with them, to display a financial summary report for example: 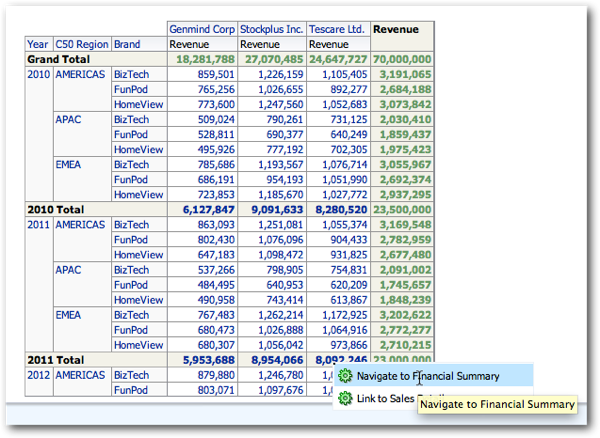 Another page on this dashboard shows of the new layout capabilities within dashboard pages; object containers can now have fixed (absolute) width and height sizes, whilst dashboard columns, and rows/columns within table and pivot table views, can also be frozen whilst other areas scroll by. 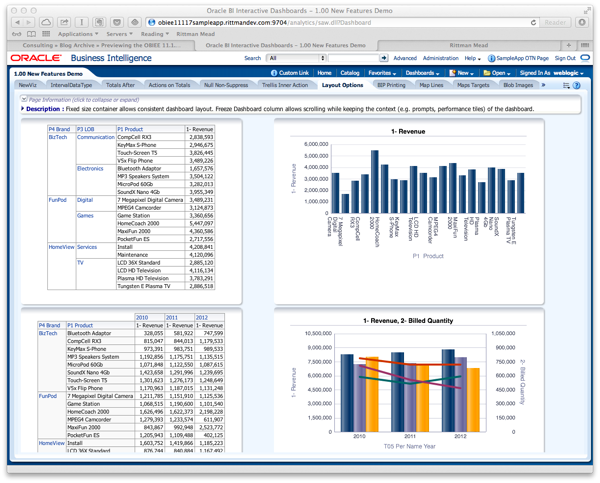 The new 11.1.1.7 SampleApp is likely to ship with Endeca Information Discovery pre-installed, and configured to provide the catalog search for OBIEE's BI Presentation Services (a new feature in OBIEE 11.1.1.7). The SampleApp 11.1.1.7 screenshot below shows a typical "faceted search" against the web catalog, displaying key attributes and an attribute search box via an Endeca Information Discovery-style guided navigation pane. The benefit of Endeca providing catalog search vs. the Presentation Server's regular search feature is that it looks much deeper into the catalog metadata, allows searching across many more attributes, and because it uses an in-memory index, it's really fast. 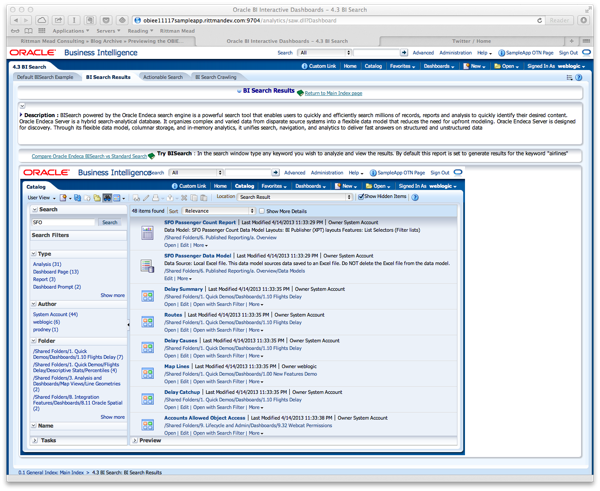 There's also some nice new Oracle R Enterprise content and demos, including an example where R scripts can be selected via the dashboard, parameter values supplied and the scripts then run; ORE using OBIEE's BI Repository as a data source, and some more examples of ORE analysing the Flight Delays dataset to predict delays on future flights, for example. 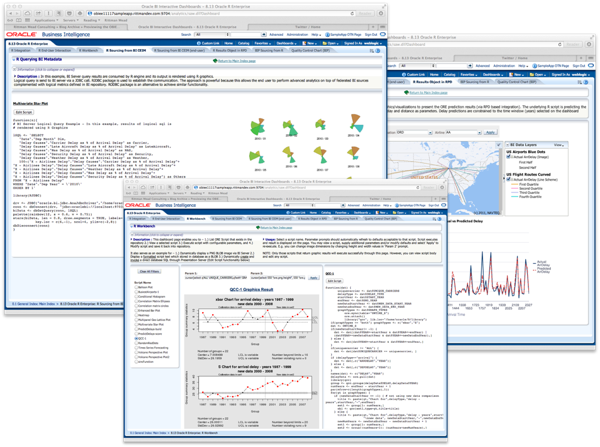 11.1.17 comes with a lot of "fit and finish" tweaks to standard visualisations, and one of the dashboard pages shows of new table and pivot table features such as tooltips over row and column values, as well as features such as rollover headers, removable pivot table corners and the like - none of these are world-changing, but they're often the sort of thing that particular customers want for their systems, and in the past we've had to hack-around in Javascript files and the like to meet similar requirements. 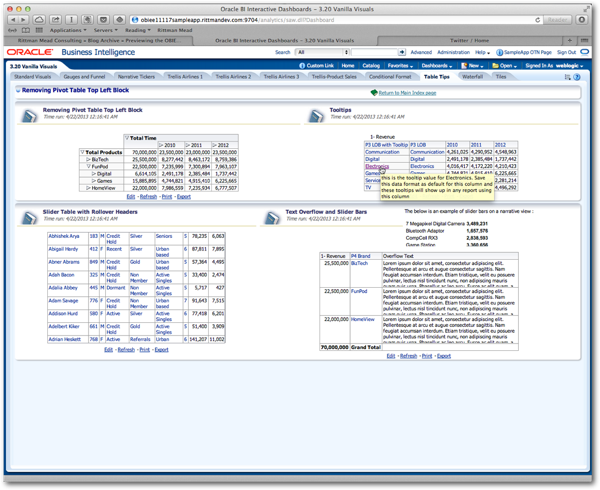 If you're an Endeca Information Discovery developer who's also interested in the state-of-play around OBIEE integration, there's a whole dashboard setting out current examples around OBIEE / Endeca integration, including examples of parameter passing between OBIEE and Endeca Studio, Endeca using OBIEE's BI Repository as its data source, and BI Publisher reporting against Endeca Server data via web service calls. 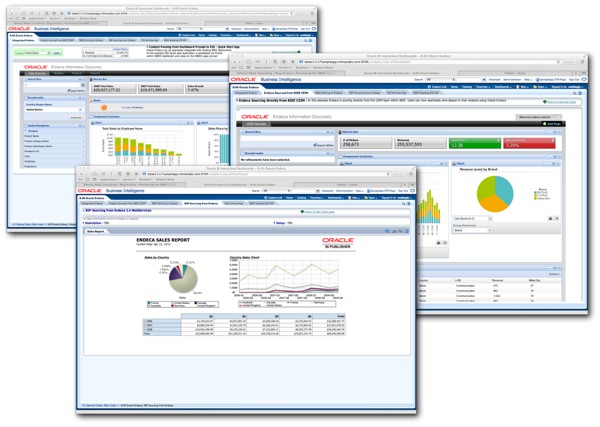 Finally, the dashboard pages added in to support DBA and developer tasks have been added to, with a new dashboard page for example displaying a list of all the physical SQL queries sent to the database. 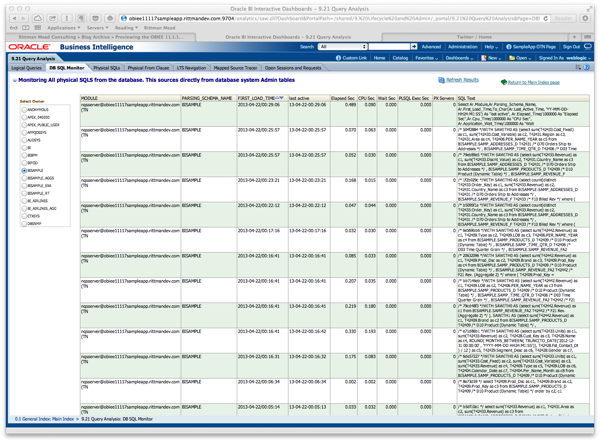 Thanks to Philippe and the BI Tech Demos team for the early preview. Check back tomorrow when we'll continue the look at what's new with OBIEE 11.1.1.7, by taking a closer look at what's changed, and dramatically improved, in the area of integration with Essbase and the Oracle EPM (Hyperion) Suite.