One of the major announcements at this year’s Oracle Openworld in San Francisco was around "OBIEE in the cloud”. Part of a wide-ranging set of announcements around services and infrastructure in the cloud from Oracle, the idea with this service is that you’ll be able to access an Oracle-hosted future version of OBIEE running in Oracle’s public cloud service, so that you can create dashboards and reports without having to perpetually-license lots of software, or stand-up lots of infrastructure in your data centre. But of course “cloud” is a hot topic at the moment, and lots of our customers are asking us about options to run OBIEE in the cloud, what’s involved in it, and how we deal with the stuff that surrounds an OBIEE installation - the data, the ETL, the security, and so forth. So I thought I’d put a couple of blog posts together to go through what options are available to OBIEE customers looking to deploy in the cloud, and see what the state of the industry is around this requirement.

I’ll start-off then by looking at the most obvious element - the BI platform itself. If you want to run OBIEE “in the cloud”, what are your basic options?

Probably conceptually the simplest, is just to run the OBIEE server applications in a cloud-based, hosted environment, for example Amazon EC2. In this instance, OBIEE runs as it would do normally, but instead of the host server being in your datacenter, it’s in a public cloud. This type of setup has been available for some time in the form of services such as Oracle On-Demand, but the difference here is that you’re using a public cloud service, there’s no service contracts to set up, usually no minimum contract size, and everything to do with security, failover, maintenance and so on is down to you. We’ve been doing this sort of thing for a long-time, typically for our cloud-based training environments, or for ad-hoc development work where it makes more sense for a server to be centrally available on the internet, rather than sitting on someone’s laptop or on an internal server. Once potential complication here is licensing - for products such as the Oracle Database, there are formal schemes such as Amazon RDS where either the license is included, or there are set metrics or arrangements to either bring your own license, or buy them based on virtual CPUs. If you’re prepared to take care of the licensing, and all of the security and maintenance aspects, this is an interesting approach.

In practice though, any setup like this is going to be what’s termed a “hybrid” cloud deployment; at least the administration side of OBIEE (the BI Administration Tool) is still going to be “on-premise”, as there’s no way you can deploy that “thin-client”, unless you create a Windows VM in the cloud too, and run the BI Administration tool from there. Moreover, your data sources are more than likely to still be on-premise, with just a few at this point hosted in the cloud, so most likely your OBIEE-in-the-cloud architecture will look like this: 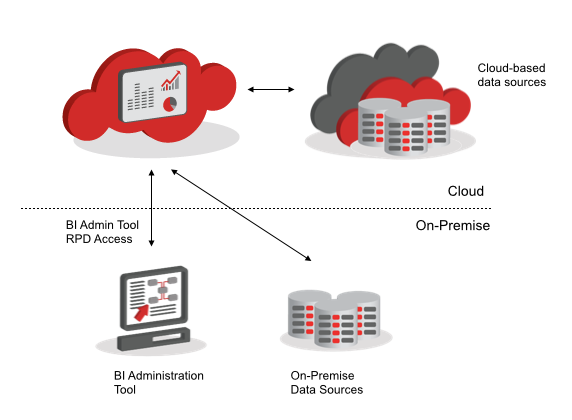 There’s other things to think about too; how do you do your ETL when your target data warehouse might be in the cloud, or your data sources might be cloud based; how do you connect to your LDAP server, and so forth - I’ll cover these in the next postings in the series. But for now, this is conceptually simple, and its main benefit is avoiding the need to host your own servers, buy your own hardware, and so forth.

So what if you want to use OBIEE, but you don’t want the hassle even of setting up your own servers in a public cloud? This is where Oracle’s new “BI in the Cloud” service comes in - the idea here is that you swipe your credit card, fill in your details, self-provision your system, and then start loading data into it. 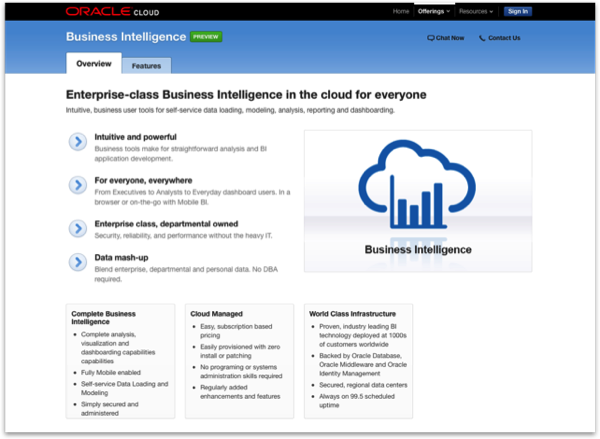 Whilst the underlying technology is core OBIEE, it’s designed for departmental, power user-type scenarios where the scope of data is limited, and the focus really is on ease-of-use, self-service and “software-as-a-service”. Looking at Oracle’s slides from Openworld, you can see the focus is quite different to on-premise OBIEE - the competition here for Oracle is the various internet startups, and products like Tableau, that make it easy to get started, provide consumer-class user interfaces, and focus on the single user rather than enterprise-type requirements. 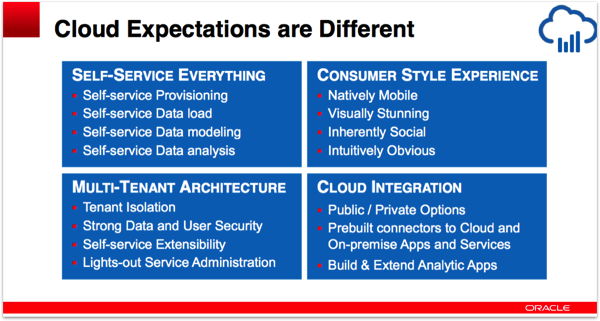 But this focus on simplicity means a limitation in functionality as well. At the start, at least, Oracle’s BI in the Cloud will only offer Answers and Dashboards; no KPIs, BI Publisher, Maps or Delivers. Moreover, at least in its first iteration, it’ll only support Oracle’s own database schema-as-a-service as the single, sole datasource, so no Hybrid cloud/on-premise federated queries, no Essbase, and no ETL tools - hence the focus on single-user, departmental use-cases.

What you do get with this setup though is a cloud-native, fully-managed service where patching is taken care of for you, all the new feature appear first, and the administration element has been re-thought to be more appropriate for deployment to the cloud - in particular, a new version of the BI Administration tool that’s cloud-native, focused on simple use-cases, and doesn’t require desktop client installs or VPN connections through to the OBIEE server. The diagram bellow shows the architecture for this option, and you can see it’s all pretty self-contained; great for simplicity, but maybe a bit limiting at least in the initial iteration. 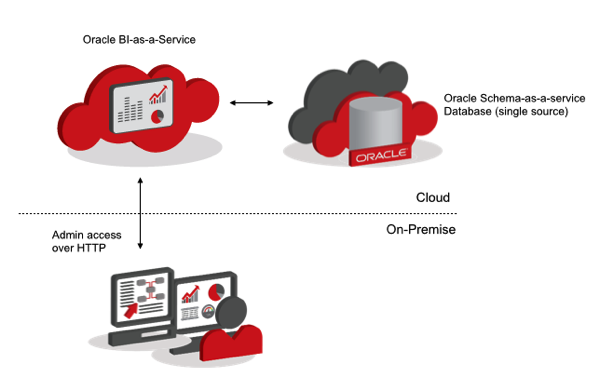 The third major variant that I can see around OBIEE in the cloud, is where partners (such as Rittman Mead) offer shared access to their cloud OBIEE installations, either as part of a development package or through some sort of multi-tenant reporting product. For example, we’re about to launch a service we’re calling “ExtremeBI in the Cloud”, where we combine our “ExtremeBI” agile development method with cloud-based development server hosting, with the cloud element there to make it easier for clients to start on a project today. Endeca Information Discovery is another product that could benefit from this approach, as the infrastructure behind an Endeca install can be fairly substantial, but users are typically more-focused on the data modelling and report-building element. In our case, the back-end cloud hosting will typically be done on a service like Amazon EC2 or VMWare’s Hybrid Cloud product, but the focus is more on the development piece - cloud is there to provide business agility. 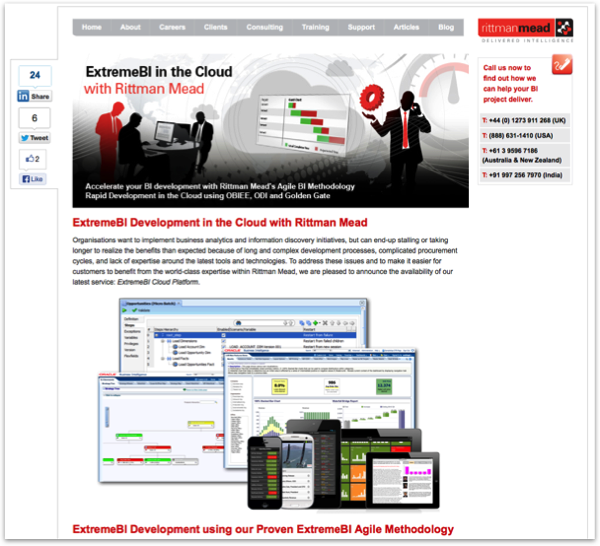 The other third-party approach to this centres around multi-tenancy; typically, a partner or company will provide a reporting or analytics element to a wider product set, and use OBIEE as its embedded dashboarding tool as part of this. In the past, setting up multi-tenancy for OBIEE was fairly difficult, to the point where most companies set up separate installs for each end-customer, but 11.1.1.7 brought a number of multi-tenant features that presumably were put there to support Oracle’s own cloud product. The product docs describe the new multi-tenant features well, but the basic premise is that a single RPD and catalog are still set up, but OBIEE can then run in a “multi-tenant” mode where GUIDs demarcate each tenant, a new BIGlobalAdministrator role is created that assumes what were the old BIAdministrator role’s privileges, with other administrator roles then set up with limited privileges and no access to Fusion Middleware Control, for example. 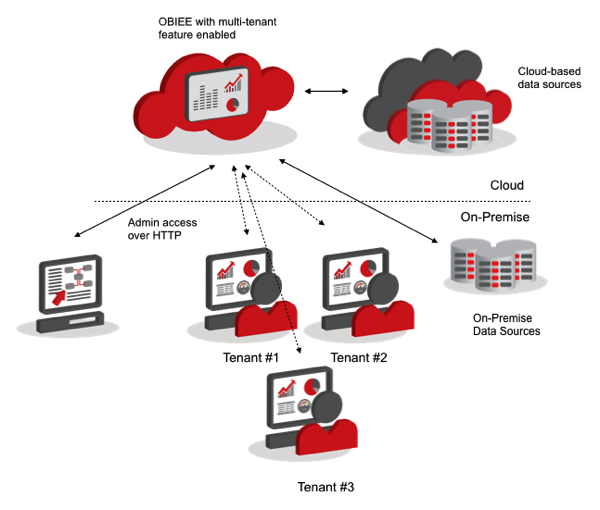 What this does give you though is the framework to set up tenant groupings of users, separate areas of the catalog for each tenant, additional identity store attributes to hold tenant details, and a security framework that enables more limited forms of administrator account more suited to tenant-type situations. Again, not all OBIEE features are available when running in multi-tenant mode, and presumably we’ll see this feature evolve over time as more requirements come in from Oracle’s own cloud BI product, but it’s a feature you can use now if you’re looking to set up a similar type of environment.

So that’s the three basic options if you want to run OBIEE in the cloud; host it in a public cloud service like Amazon EC2 but then just run it like regular OBIEE; go for Oracle’s upcoming BI-in-the-cloud service, if the use-case suits you and you can live with the limitations, or consider one of the services from partners such as ourselves where we bundle cloud hosting of OBIEE up with a larger service offering like our “ExtremeBI in the Cloud” offer. But of course OBIEE is only one part of the overall platform - where do you store the data, and how do you get the data from wherever it normally is up into the cloud - in other words, how do we do ETL in the cloud? Check back tomorrow for the follow-up post to this one: Part 2 - Data Warehouse and ETL.

Thoughts on Running OBIEE in the Cloud : Part 2 - Data Sources and ETL

In yesterday’s post on running OBIEE in the cloud, I looked at a number of options for hosting…

Introduction We all love a good commandline utility. It gives us that warm feeling of control and puts hairs…