Over the last couple of days I’ve been taking a look into the new BI Apps package Oracle have released using ODI instead of Informatica. Mark has already published an article outlining how ODI is used to manage and run the ETL process. However, this blog will focus on how you can make your own customisations in ODI and relate them back to concepts from previous BI Apps releases. If you want to follow along with the examples in this blog, I began by installing the applications using Mark Rittman and Kevin McGinley’s  cookbook. This will take you through the point of generating a load plan to load one or more facts I won’t repeat the steps for this configuration, but will go through how to generate the load plan to include your custom packages. The fact group that I am selecting to load is Inventory Transactions (INVTRX_FG).

The most basic and typical type of customisation is simply adding a column to an existing table, called a Category 1 change. For this, I’ll go through a very simple addition onto W_INVENTORY_PRODUCT_D, just adding a new column to hold the current date. The first step required is to create some new sub folders to hold these custom mappings. This mirrors previous versions and is done for the same reason: to separate customisations from prebuilt metadata in order to allow for an easier upgrade path. This can be done in the Designer tab, using the Projects pane.

It is also recommended to edit the release tags for the new folders to register them to the correct BI Apps sources and targets. These tags allow for shortcuts to be made in ODI, and all of the objects relating to specific tags to be referenced together. You can edit release tags by clicking on the icon in the top right hand side of the Designer tab.

Next, find the interface (akin to an Informatica mapping) to be customised in it’s relevant extract folder. In this case I’m using EBS 12.1.3 as a source and modifying SDE_ORA_InventoryProductDimension. Copy the whole subfolder, that way you get the interfaces as well as the packages (similar to an Informatica workflow). At this point I added the custom column, X_CURRENT_DATE,  to the database tables:

It’s still worth prefixing new columns with “X_” to denote customisation. ODI has the capability to import these changes into the mode, similarly to importing source and target definitions in Informatica. Open up the Models pane on the left hand side. This contains all of the table definitions for all schemas and is organised by source and then by table type. 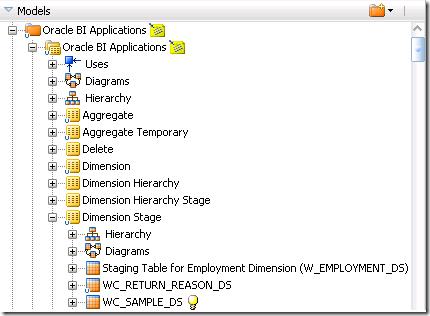 After opening a table definition you can edit several attributes including the column definitions. The easiest way to do this is to use the Reverse-Engineer functionality. This will read the table definition from the database and import it into ODI. Another interesting feature of ODI is to choose the OLAP type. This has options of Fact, Dimension (SCD 1) and Slowly Changing Dimension (SCD 2). When set to Slowly Changing, you can edit the column properties to set their update behaviour. This way you can very easily alter a dimension to be SCD type 2 or vice versa.

Once the table definition has been saved, the new column can be referenced when editing interfaces. The process of adding new columns is relatively simple in that you can drag across the desired column into the target datastore. Furthermore you can use expressions which reference variables and functions defined in ODI. In this example I’ve simply set the new column to be CURRENT_DATE in the extract (SDE) interface. Then this column can then be brought through the load (SIL) interface. Often, the BI Apps interfaces will use Yellow interfaces (as indicated by their icon) as their sources. This is an ODI mapping which doesn’t load into a defined datastore. Instead you define the target columns in the interface itself and ODI will create a temporary table. This interface can be used as a source in another mapping. This can be chained as many times as necessary and hence can replicate flow-based mappings which were frequent in Informatica. Typically, they are used for similar purposes to a source qualifier in previous releases.

The interface is run as part of a package which can include other steps using functionality from ODI, the database or on the OS itself. This is equivalent to a workflow in Informatica. One of the key differences however, is that there is only one package required for both full and incremental loads whereas we had two Informatica mappings. This is because of the existence of functions and variables defined globally in ODI, whereas previously parameters were defined at a mapping and workflow level. The mechanics of this will be described in part 2 of this blog series. The package for the interface is accessible from the Projects pane as well.

The next step is to right click on the package and generate a scenario which will be executed by the load plan. Note, that before doing this, it is worth changing the user parameter Scenario Naming Convention to %FOLDER_NAME(2)%_%OBJECT_NAME%. This will ensure they match the out of the box scenarios. The final step is to ensure that the new mappings will be included in the generated load plan. As part of the configuration for BI Apps, you are asked to select which fact groups to include in the generated load plan. This is equivalent to adding subject areas to an execution plan and then generating the dependencies. This version of BI Apps has provided similar functionality through it’s Load Plan generator. The mechanics of the load plan generator will be described further in the next part of the blog. In order for the generator to pick up the new mappings, they need to be added to the master plan which is a superset containing all interfaces without any particular order. The master plan can be edited in the Load Plans and Scenarios pane of the Designer tab. The master plan information is under BIAPPS Load Plan/Load Plan Dev Components. They are split into the three extract phases and then subsequently split into fact and dimension groups. In this case, I’ve edited the INVPROD_DIM Load Plans for the SDE and SIL folders. Open the load plan and navigate to the steps section. Here we can modify the relevant task to use the scenario from our custom folder. This is the same as changing the logical folder for a task in DAC.

Now you can go back to the BI Apps Configuration Manager, navigate to Load Plans and regenerate the plan. This will include the custom scenario instead and you can reset data sources and run the plan to load the custom column.

In the next part of the blog I will go through how to do a category 2 customisation, creating a new dimension and fact table and adding that to the load plan.

In the last blog I went through a very basic customisation, adding a new column to an existing dimension…

It's January 2014, and it’s that time of year when we start planning out this year’s BI…