Over the years, I've blogged quite a bit about integration between Oracle Data Integrator and GoldenGate, and how to make it all work with the Oracle Reference Architecture. With the release of the 12c versions of ODI and GoldenGate last October, and a soon-to-be-updated reference architecture, it’s time to write a few posts on the subject again.

Getting Started with 12c

First, let me describe the new Journalizing Knowledge Module (JKM) that has been introduced in ODI 12c for integration with GoldenGate: JKM Oracle to Oracle Consistent (OGG Online). This JKM now allows GoldenGate to be setup in an "online" mode, meaning the GoldenGate parameter files and process groups will be configured and installed on the source and target GoldenGate servers. ODI communicates with the GoldenGate JAgent to perform the installation. The "offline" mode still exists as it did in the 11g version of the JKM, in which the parameter files, etc. are created in a temporary location, and then manually moved to the source and target. I'll use the "online" JKM throughout this series of posts.

Another change to how Journalizing is implemented for GoldenGate in ODI is the Model to which the JKM is applied. In ODI 11g, the GoldenGate JKM was always applied to the Model containing the target tables, leaving the source table metadata completely out of the picture. This made sense, as GoldenGate handled everything on the source side. Now in ODI 12c, the source tables are reverse engineered and the JKM applied to the source Model. This allows the source table to be used in a single mapping for both the initial load and incremental load of the performance layer through the use of ODI 12c deployment specifications. The target, or fully replicated table, is no longer necessary in the metadata. We'll talk through this concept in more detail later on.

Finally, before we get into the details, let's go over the latest (yet to be released, I might add) version of the Oracle Information Management Reference Architecture. It was first presented by Stewart Bryson and Andrew Bond (Oracle) at the Rittman Mead BI Forum in Brighton (which is why I was given the OK to mention it pre-release!).

This latest reference architecture is not much different than previous versions. The main difference that pertains to this blog post is that the Staging Layer has been renamed the Raw Data Reservoir. If you look through the presentation by Stewart and Andrew, you'll see that the many of the principles remain the same. They also describe more about an Agile approach to implementing the reference architecture, using GoldenGate, OBIEE against transactional schemas, and eventually ETL development using ODI, a methodology we here at Rittman Mead use with our clients, and call ExtremeBI. Look for the official release of the latest Information Management Reference Architecture in the next couple of months.

In this blog series, we'll look at how to load the Raw Data Reservoir and Foundation Layer using GoldenGate, and subsequently load the Access and Performance Layer with Oracle Data Integrator Mappings. If you recall from my 11g posts on the subject, we don't need to load these layers in sequence. GoldenGate will allow the extract of source data once and replication to multiple targets in parallel. 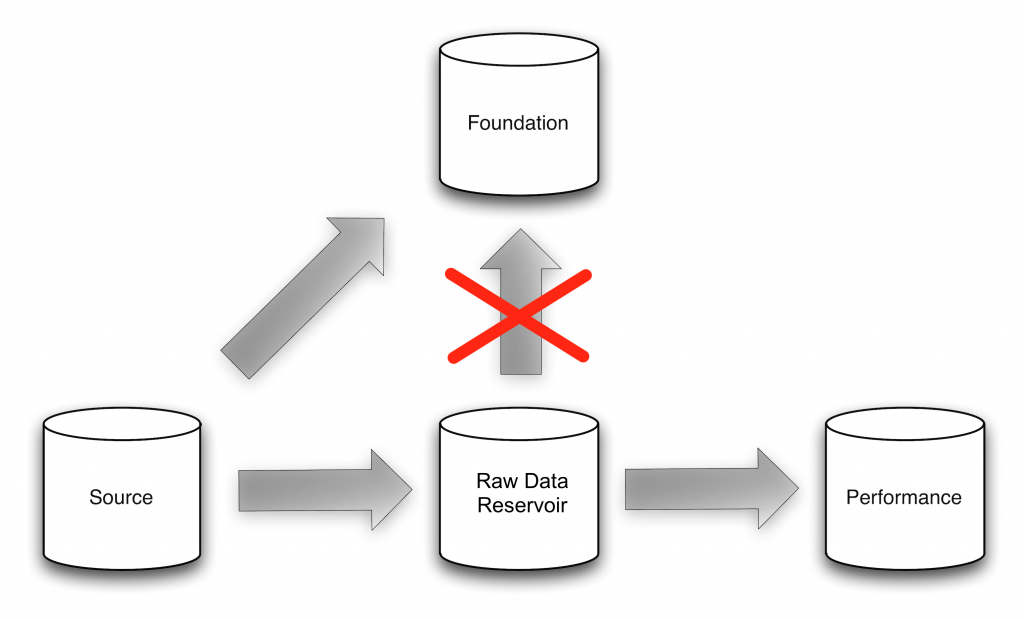 Now that we've gone through some of the updated concepts for 12c and the Reference Architecture, let's look at the high-level steps that must be taken in order to implement GoldenGate and ODI integration.

There is quite a lot of detail to add to these steps, so let's get right into it.

The install of GoldenGate 12c is pretty straight-forward, so I don't plan on going into much detail here. A step-by-step guide can be found on the DBASolved blog, with the installation setting up and starting the manager process and creating the necessary subdirectories. We then need to configure the JAgent on both the source and target GoldenGate installations, enabling ODI to communicate with GoldenGate during the "online" JKM start journalizing process, which will automatically configure and start the GoldenGate process groups. Setting up the JAgent for ODI integration is essentially the same as if you were setting up Oracle Enterprise Manager integration with GoldenGate.

First, you'll notice that the file jagent.prm exists in the dirprm directory after installation completes. This parameter file will be used by the jagent process once started in GGSCI.

To allow secure communication between ODI and GoldenGate, we must create an Oracle Wallet with a password for JAgent. From the GoldenGate install directory, run the password agent. This will create the cwallet.sso file in the dirwlt subdirectory.

We're almost there! Now we need to make a slight change to the Config.properties file in the cfg directory under the GoldenGate home. Edit this file and make the following changes:

Set the agent type to Oracle Enterprise Manager. If left as the default OGGMON, the JAgent will attempt to register with the Monitor server, which most likely is not installed.

Under the JMX Username, add the line to signify that SSL is not being used by JAgent (unless SSL is actually being used!).

Finally, ensure the JAgent port is unique across all installations, and on the server in general. In my example, I'm using a single Virtual Machine to host both the source and target GoldenGate installations, so I need to be careful about which ports are in use.

Before starting the JAgent, go ahead and stop, then start the Manager process to ensure all changes have been initialized. Then, start the JAgent and check to ensure both Manager and JAgent are running. That completes the GoldenGate installation and JAgent configuration. 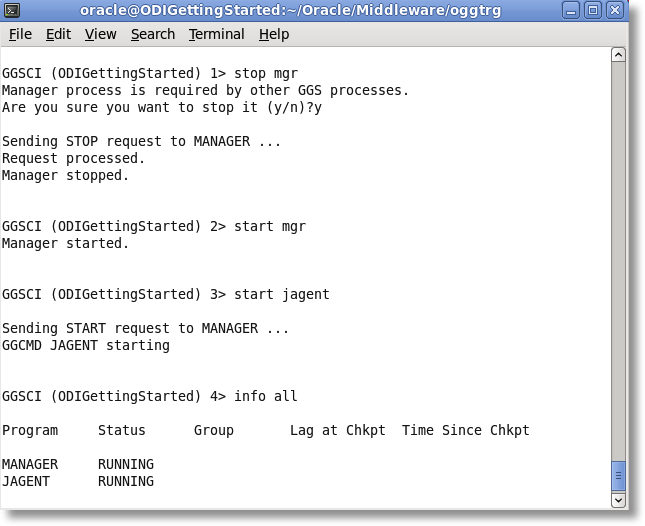 If you want to just skip all of this installation work and get right to it, you can always download the Prebuilt Machine for Oracle Data Integrator 12c. It's a VirtualBox VM with ODI 12c and GoldenGate 12c already installed and configured to work with the Getting Started Guide. The JAgent is already configured on the source and target GoldenGate installations, making it easy to get up and running. This is a great resource that the Oracle Data Integration product team has provided, and it sounds like they plan to continue adding to it in the future.

In Part 2 of the blog post series, we'll edit the JKM to enable parallel load of the Raw Data Reservoir and Foundation Layer, as well as begin setup of the ODI Topology and metadata.