I want to briefly interrupt my blog series on GoldenGate and ODI - A Perfect Match in 12c... to provide another Data Integration Tip that was found during a recent client engagement. I was tasked with installing GoldenGate 11g into a 2-node RAC, which is a pretty straight-forward process and well documented by the Oracle Data Integration product team. The challenge is that the client's Oracle RAC environment was installed on Windows Server 2003.

Working through the GoldenGate setup and configuration process for RAC / Clusterware, most of the same approach applies to either Unix/Linux or Windows (maybe a future blog post?). There is also an example action script towards the bottom, but it's written in shell script..and that just won't work in Windows! For those unfamiliar with Clusterware, when an application is added as a resource, Clusterware will use the action script to perform specific functions, or actions, against the application. These actions, Check, Start, Stop, etc., will often times run commands through GoldenGate's GGSCI application, ensuring the Manager process is running, starting the Manager, etc.

We decided to convert the shell script example to batch command script, as this is about as native as it gets in Windows. Everything was going well with the conversion until we reached this function and the highlighted code below.

The script will simply change directory to the GoldenGate home, run the GGSCI application, execute the command (passed in as an argument), and then exit GGSCI. This is all wrapped within two EOF "tags", indicating that the formatting in the script, such as hard returns, etc, should remain when the external command is run. It's known as a heredoc, and we found that it's not really possible to do in a batch script.

When attempting similar code in the batch script, without the heredoc, we ran into an issue. GGSCI attempted to run all of the commands on the same line, which failed miserably. We needed another approach to ensure the script would execute properly.

The goal was to find a way to run a GGSCI command on a single line. The solution: use GGSCI to execute GoldenGate obey files. Rather than attempt to place hard returns in the batch command script, we simply placed all of the necessary commands in an obey file and passed the obey command and script file location it into the function.

The obey file could be as complex as you like, but in this case it simply starts the manager process. 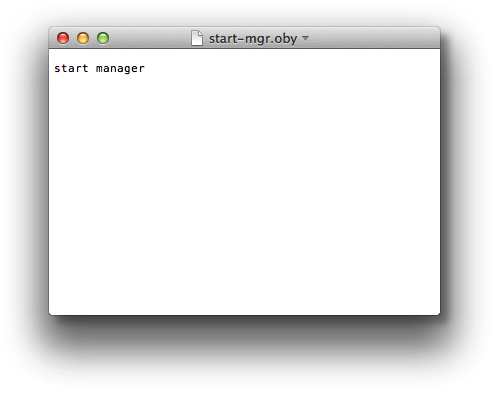 This approach works very well, but we did end up with the additional obey files to maintain. Next time around, I'll probably use a scripting language such as Groovy or Python, as either should work just fine on Linux or Windows.

Look for more Data Integration Tips on the blog, as Rittman Mead always coming up with innovative solutions to interesting challenges!