Oracle announced their Big Data SQL product a couple of weeks ago, which effectively extends Exadata’s query-offloading to Hadoop data sources. I covered the launch a few days afterwards, focusing on how it implements Exadata’s SmartScan on Hive and NoSQL data sources and provides a single metadata catalog over both relational, and Hadoop, data sources. In a Twitter conversation later in the day though, I made the comment that in my opinion, the biggest benefit of Big Data SQL will be in its ability to extend Oracle’s security model to Hadoop data sources, because Hadoop security Hadoop security is still a bit of a mess:

lang="en">To me the greatest benefit of Big Data SQL is the single security model; even with Sentry, Hadoop security is fragmented and a mess (IMO)

I’ve been working on an Oracle Big Data Appliance project over the past few weeks, as the technical architect and initial sysadmin for the cluster, and it’s given me a first-hand experience of what security’s like on a Hadoop cluster. Over the past few weeks I’ve had to come up with a security policy covering HDFS, Hive and the Cloudera management tools (Cloudera Manager, Hue etc), and try and implement an access and authorisation approach that ensures only designated people can log in, and when they’re in, they can only see the data they’re supposed to see. Hadoop at this point, to my mind, suffers from a couple of major issues when it comes to security:

If we take a typical security policy that a large enterprise customer’s going to want to put in place, it’ll look something like this:

Back in the early days of Hadoop these types of security policy weren’t often needed, as the users of the Hadoop cluster were typically a small set of data scientists or analysts who’d been cleared already to view and work with the data in the cluster (or more likely, they did it and just didn’t tell anyone). But as we move to enterprise information management architectures such as the one outlined in my two-part blog post series a few weeks ago (pt.1, pt.2), the users of Hadoop and other “data reservoir” data sources are likely to increase significantly in number as data from these systems becomes just another part of the general enterprise data set.

But in practice, this is hard to do. Let’s start with HDFS first, the Hadoop Distributed File System on which most Hadoop data is stored. HDFS aims to look as similar to a Linux or Unix-type filesystem as possible, with similar commands (mkdir, ls, chmod etc) and the same POSIX permissions model, where files and directories are associated with an owner and a group and where permissions are set for that owner, the group and all others. For example, in the HDFS file listing below, the “/user/cust_segment_analysis” directory is owned by the user “mrittman” and the group “marketing”, with the directory owner having full read, write and subdirectory traversal access to the directory, the group having read-only and subdirectory traversal access, and all others having no access at all.

Which all sounds great until you then have another group that needs read-write access to the directory, but you’re limited to just one group permissions setting for the directory which you’ve already used to set up read-only access for that particular group. If you therefore need to set up different sets of security access for different groups, you typically then end-up creating multiple HDFS directories and multiple copies of the dataset in question, assigning each copy to a different group, which isn’t all that convenient and gives you other problems in terms of maintenance and keeping it all in-sync.

What you of course need is something like the “access control lists” (ACLs) you get with operating systems like Windows NT and MacOS, where you can define an arbitrary number of user groups and then assign each of them their own permission set on the directory and the files it contains. The most recent versions of Hadoop actually implement a form of ACL for HDFS, with this feature making its way into the recently-released Cloudera CDH5.1, but these ACLs are an addition to the standard POSIX user, group, others model and aren’t recommended for all files in your HDFS filesystem as according to the Hadoop docs "Best practice is to rely on traditional permission bits to implement most permission requirements, and define a smaller number of ACLs to augment the permission bits with a few exceptional rules. A file with an ACL incurs an additional cost in memory in the NameNode compared to a file that has only permission bits.” Still, it’s better than not having them at all, and I’d imagine using this feature for particular directories and sets of files that need more than one set of group permissions configured for them.

In most cases though, the way you’ll present data out to non-technical end-users and applications is through Hive and Impala tables, or through tools like Pig and Spark. Under the covers, these tools still use HDFS permissions to control access to the data within Hive and Impala tables, but again by default you’re limited to granting access to whole HDFS directories, or the files contained within those directories. Something that addresses this issue is a product called Apache Sentry, an open-source project within the Hadoop family that enables role-based access control for Hive and Impala tables. Oracle are one of the co-founders of the Sentry project and include it in the base software on the Big Data Appliance, and using Sentry you can grant SELECT, INSERT or ALL privileges to a group on a particular Hive or Impala table, rather than on the underlying HDFS directories and files. A form of fine-grained access control can be set up using Sentry by creating views with particular row-level security settings, giving you the basics of a database-like security policy that you can apply over the main way that users access data in the cluster.

But Sentry itself has a few significant prerequisites - you have to enable Kerebos authentication on your cluster, which you should do anyway because of the risk of account spoofing, but is still a significant thing to set up - and of course you need to link Hive and Impala to your corporate LDAP server and configure them to work in the way that Sentry requires. Most importantly though, you’re still left with the situation where you’ve got two separate security setups - the one for your corporate data warehouse and relational data sources, and another for data accessed on Hadoop, and it’s still hard to be sure, what with all the disparate products and partially-complete open-source products, whether data in your Hadoop cluster is still really secure (though products like Cloudera Navigator aim to provide some form of data governance and auditing over these datasets); and, there’s still no straightforward way to remove individual customers’ data out of the Hadoop dataset (“data redaction”), no easy way to obfuscate or mask data, and no easy way (apart from the Hive views mentioned before) to restrict users to accessing only certain columns in a Hive or Impala table.

And so this is where Oracle’s Big Data SQL product could be very interesting. Big Data SQL takes the Exadata model of moving as much filtering and column-projection as it can to the storage server, adding Oracle SmartScan functionality to the Hadoop node and allowing it to understand the full Oracle SQL dialect (and PL/SQL security functions), rather than just the subset of SQL provided by HiveQL and Impala SQL. 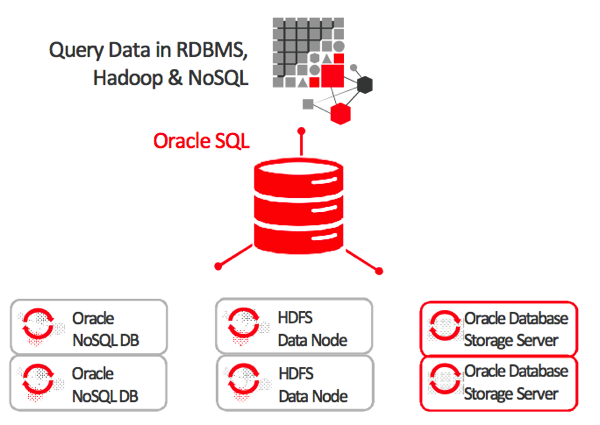 More importantly, it’ll enable a single unified data dictionary over both Oracle and Hadoop data sources, presenting Hive tables and NoSQL data as regular Oracle tables and allowing the DBA to create data security, redaction and row-level filtering policies over both relational and Hadoop data - giving you potentially the ability to define a single security policy across all data in your overall information management architecture.

So I think this is actually a “big deal”, and potentially even more game-changing that the SmartScan functionality that got most of the attention with the Big Data SQL product launch. How well it’ll work in-practice, and how much will be enabled on day one it’s hard to say, but this feature meets a real need that our customers are finding now, so I’ll be very interested to try it out when the product becomes available (presumably) later in the year.