One of the things at Rittman Mead that we’re really interested in, is the architecture of “information management” systems and how these change over time as thinking, and product capabilities, evolve. In fact we often collaborate with the Enterprise Architecture team within Oracle, giving input into the architecture designs they come up with, and more recently working on a full-blown collaboration with them to come up with a next-generation Information Management architecture. I these two posts I wanted to share some of our recent thinking in this area, looking first at our new proposed architecture, and then in the second post talking about how we’d use agile development methods, in-particular our “ExtremeBI” development approach, to deliver it.

But first, some history. Back in 2009 I blogged about a first-generation DW reference architecture which introduced a couple of new concepts, based on new capabilities from tools such as OBIEE plus some thinking we, and the Enterprise Architecture team at Oracle, had been doing over the years. This reference architecture introduced the concept of “Foundation” and “Access and Performance” layers, and recognised the reality that Kimball-type star schemas were great for querying but not so good for long-term, query-neutral storage of data, whilst Inmon-style EDW models were great as a long-term, process-neutral system of record, but not so good for running user queries on. This new architecture included both of these design approaches, with the foundation layer forming the “information management” layer and the access and performance layer being the “information access” layer. Most importantly, tools like OBIEE made it possible for enterprises to create metadata layers that potentially accessed all layers in this model, so users could query the foundation layer if needed as well as the access and performance layer, if the foundation layer was a better source of data for a particular reports. 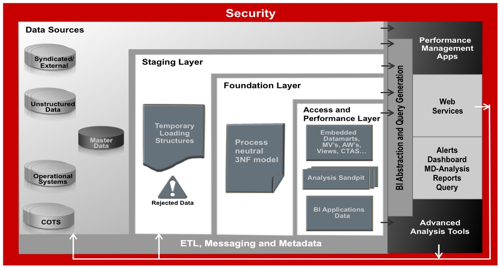 A second revision to this model, a couple of years later, expanded on the original one and introduced another two interesting concepts, brought upon by the introduction of tools like Endeca Information Discovery, and the rise of unstructured and semi-structured data sources. This new architecture added unstructured and semi-structured sources into the model, and also introduced the concept of “sandboxes”, areas of the information management model that allowed more free-form, exploratory BI applications to be built. 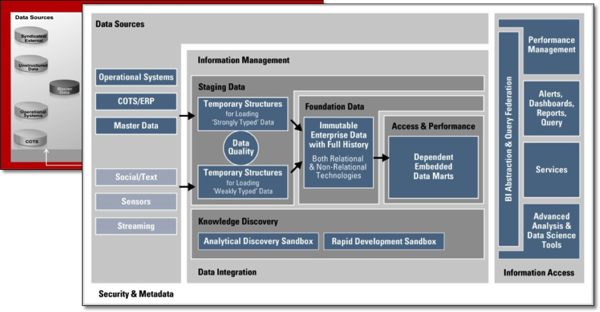 But in-practice, this idea of “unstructured” and “semi-structured” sources wasn’t all that helpful. What really started to make an impact in the past couple of years is the increasing use of “schema-on-read” databases, where we trade-off the performance and defined structure of traditional relational 3NF and star schemas for the flexibility and “time-to-value” provided by key-value store databases. The Endeca Server is a good example of these types of database, where the Endeca Server allows rapid storage of loosely-associated datasets and tools like Endeca Studio then apply a structure to the data, at the time of analysis. Schema-on-read databases are great for fast, flexible access to datasets, but the cost of ETL is then borne by each system that accesses the data.

Probably the most well-known examples of schema-on-read sources though are Hadoop, and NoSQL databases. Coupled with their ability to store lots of detail-level data at relatively low cost, Hadoop and NoSQL databases have significantly affected the overall landscape for BI, data warehousing and business analytics, and we thought it was about time for a new reference architecture that fully-incorporated the capabilities and latest thinking around this area. Back at the start of 2014 myself, Jon Mead and Stewart Bryson met up with Oracle’s Andrew Bond in his team for a series of workshops, and what came out of it was an updated Information Management Architecture and a development methodology for delivering it. Let’s start off then by looking at this updated architecture from a conceptual view.

At a conceptual level, we build on this idea of sandbox environment and formally separate things out into the Execution area - business-as-usual, production and development areas - and an Innovation area, where we build on the idea of a sandbox and rename it the “Discovery lab”. The Discovery lab is where, for want of a better word, the “data scientists” work, with fewer constraints on development and whose inputs are events and data, and outputs are the discovery output that can be the prototype and inspiration for designs going into the execution area.

The main “engine” of the Execution area is our enterprise store of data, this time broken down into four areas:

Together, the execution and innovation layers form our “information platform”, with the event engine feeding real-time events into the platform and outputting them into the data reservoir, and traditional ETL routines loading structured data from the enterprise into the enterprise information store.

This conceptual architecture then permits several types of information application. For example, the data reservoir and the data factory together could support what we call “data applications”, applications working on semi-structured, large and low-granularity data sets such as those used for genomic analysis. 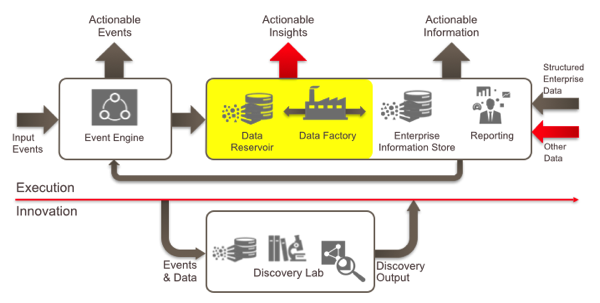 Other applications might be more traditional BI and data warehousing applications, but with the addition of data from the data reservoir and the analysis capabilities of Hadoop. 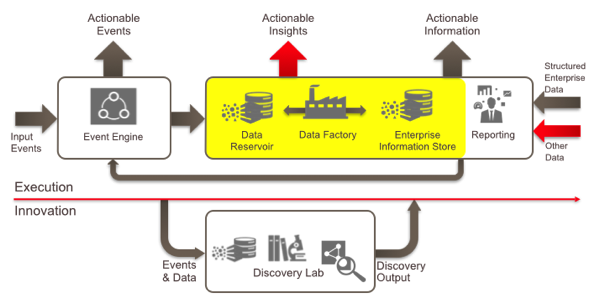 The discovery lab can be a standalone area, or the insights and discovery it outputs can be used as inputs into the main information platform. More event-based data will typically come in via the event engine, with its output going into the data reservoir and supporting “next-best-decision” applications like Oracle Real-Time Decisions.

Another way of looking at this architecture is from a logical perspective, in particular focusing on the data layers and access/loading processes to load them. The diagram below is our latest version of the two diagrams at the start of this article, and as you can see we’ve kept the data sources and BI element much the same, and kept the concept of the sandbox, in this case refined as the “discovery lab sandbox”.

What is different this time though is the middle bit; we’ve lost the staging area and replaced it with the raw data reservoir, added a “Rapid Development Sandbox”, and drawn the main layers as a slanted set of stacked areas. So why?

What we’re trying to show with the slanted data layers is the relative cost of data ingestion (loading), and the relative cost of accessing it (information interpretation). For the raw data reservoir, for example, there’s little cost in ingesting the data - maybe copy some files to HDFS, or use Flume or GoldenGate to capture log or transaction data to HDFS or Hive, but the cost is then borne in accession this typically “schema-on-read” data source. As you go up the stack, there’s a bit more work in landing data into the Foundation layer - ETL routines, GoldenGate routines, some data cleaning and constraint checking, for example - but it’s correspondingly easier to get data out. For the Access and Performance Layer there’s the most cost in getting data in, but then users have very little work to do when getting data out.

Data can move up the stack from Raw Data Reservoir to Foundation, or directly into Access and Performance, or it could be landed at levels above Raw Data Reservoir, for example in our ExtremeBI approach where we use GoldenGate to replicate source system tables directly into Foundation without going through a staging layer. The Rapid Development Sandboxes are there to support agile, iterative development, with the output from them either being the result in itself, or their designs and insights being used to create more formal projects and data structures.

From a more product-centric perspective, you can overlay these types of diagrams with specific schematics for example enterprises. For example, in the diagram below you can see Oracle NoSQL database being see with HDFS and the Oracle Big Data Connectors to capture and store events from Complex Event Processing, and then outputs from CEP being also fed into a more traditional, “high density data” store as well as directly into a decision engine. 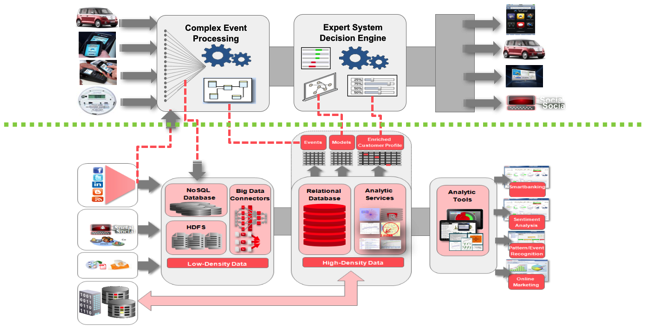 So this all sounds great, but how do you build it? Do we have to use the (discredited) step-by-step, waterfall method to build this type of architecture, and in particular the key “data factory” element that provides connectivity between the Raw Data Reservoir and the Enterprise Information Store? And can we apply agile methods to big data sources, as well as regular databases and applications? Check back on Monday for our thoughts on how this should be done.