Most OBIEE projects that we see are delivered through some sort of “waterfall” method, where requirements are defined up-front, there’s several stages of development, one or more major releases at the end, and any revision to requirements takes the form of a change request. These work well where requirements can be defined upfront, and can be reassuring to customers when they want to agree a fixed-price up-front with every subsequent change clearly costed. But, as with the development world in general, some customers are starting to look at “agile” methods for delivering BI projects, where requirements emerge over the course of a project, there isn’t so much of a fixed design or specification at the start, but instead the project adds features or capabilities in response to what are called “user stories”, making it more likely in-the-end that what ends-up getting delivered is more in-line with what users want - and where changes and additions to requirements are welcomed, rather than extra-cost change requests.

OBIEE naturally lends itself to working in an agile manner, through the three-layer nature of the repository (RPD); by separating the physical representation of the source data from how it is then presented to the end-users, you can start from the off with the dimensional model that’s your end goal, and then over time evolve the back-end physical layer from pointing directly at the source system to instead point at a data warehouse or OLAP cube. In fact, I covered this approach back in 2008 in a blog post called “A Future Oracle OBIEE Architecture” where I positioned OBIEE’s BI Server as a “business logic layer”, and speculated that at some point in the future, OBIEE might be able to turn the logical > physical mappings in the RPD into actual ODI mappings and transformation. 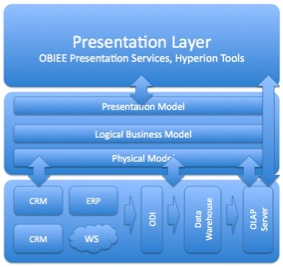 In the end, although OBIEE’s aggregate persistence feature gave us the ability to spin-off aggregate tables and cubes from the RPD logical model, full ETL “push-down” never came although you can see traces of it if you have a good poke around the DLLs and directories under the BI Server component. What did happen though was Exadata; with Exadata, features such as SmartScan, and its ability to do joins between normalised tables much faster than regular databases meant that it became possible to report directly against an OLTP schema, or a ODS-like foundation layer, only adding ETL to build a performance star schema layer if it was absolutely necessary. We covered this in a series of posts on Agile Data Warehousing with Exadata, and the focus of this method was performance - by adding Exadata, and the metadata flexibility in OBIEE’s RPD, we could deliver agile projects where Exadata gave us the performance even when we reported directly against a third-normal form data source.

And this approach worked well for our customers; if they’d invested in Exadata, and were open to the idea of agile, iterative development, we could typically deliver a working system in just a few months, and at all times what the users got was what they’d requested in their user story backlog. But there were still ways in which we could improve this method; not everyone has access to Exadata, for example, and reporting directly against a source system makes it tricky to add DW features like history, and surrogate keys, so recently we introduced the successor to this approach, in the form of an OBIEE development method we called “ExtremeBI”. Building our previous agile work, ExtremeBI introduced an integration element, using GoldenGate and ODI to replicate in real time any source systems we were interested in to the DW foundation layer, add the table metadata that DW systems expect, and then provide a means to transform the logical to physical RPD mappings into ODI ETL specifications.

But in a way, all the technical stuff is by-the-by; what this means in practice for customers is that we deliver working systems from the first iteration; initially, by reporting directly against a replicated copy of their source system (with replication and metadata enhancement by GoldenGate, and optionally ODI),and then over subsequent iterations adding more end-user functionality, OR hardened ODI ETL code, all the while driven by end-user stories and not some technical design signed-off months ago and which no longer reflects what users actually want.

What we’ve found though from several ExtremeBI customer engagements, is that it’s not just down to the technology and how well ODI, OBIEE and GoldenGate work; the major factors in successful projects are firstly, having the project properly pre-qualified at the start; not every project, and not every client, suits agile working, and agile works best if you’re “all in” as opposed to just agreeing to work in sprints but still having a set-in-stone set of requirements which have to be met at a certain time. The second important success factor is proper project organisation; we’ve grown from just a couple of guys with laptops back in 2007 to a fully-fledged, end-to-end development organisation, with full-time delivery managers,a managed services desk and tools such as JIRA, and you need to have this sort of thing in place, particularly a project management structure that’s agile-friendly and a good relationship with the customer where they’re fully-signed up to the agile approach. As such, we’ve found the most success where we’ve used ExtremeBI for fairly technically-savvy customers, for example a MIS department, who’ve been tasked with delivering something for reasonable price and over a short amount of months, who understand that not all requirements can be delivered, but really want their system to get adopted, delight their customer and focus its features on what’s important to end-users.

As well as processes and a method, we’ve also developed utilities and accelerators to help speed-up the initial setup, and ensure the initial foundation and staging layers are built consistently, with GoldenGate mappings already put in place, and ready for our developers to start delivering reports against the foundation layer, or use these foundation-layer tables as the basis of a data mart or warehouse build-out. The screenshot below shows this particular tool, built using Groovy and run from within the ODI Studio user interface, where the developer selects a set of source tables from an ODI model, and then the utility builds out the staging and foundation layers automatically, typically saving days over the manual method. 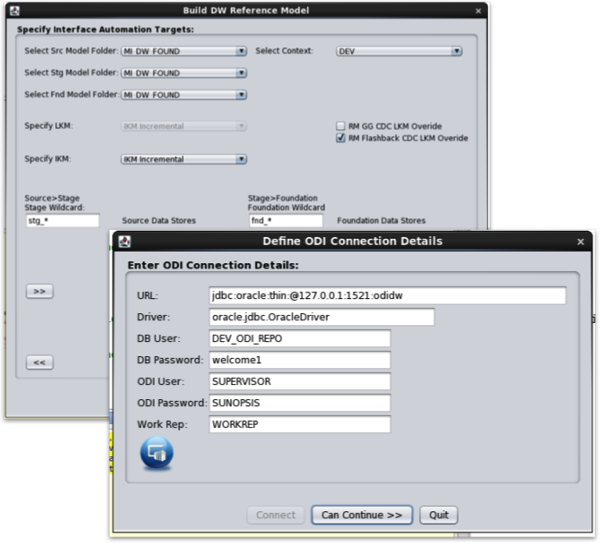 We’ve also built custom KMs for ExtremeBI, including one that uses Oracle Database’s flashback query feature to pull historical transactions from the UNDO log, as an alternative to Oracle Streams or Oracle GoldenGate when these aren’t available on the project.

All together, using Rittman Mead’s ExtremeBI method along with OBIEE, ODI and optionally GoldenGate has meant we’ve been able to deliver working OBIEE systems for customers over just a few months, typically for a budget less than £50k. Coupled with cloud hosting, where we can get the customer up-and-running immediately rather than having to wait for their IT department to provision servers, we think this the best way for most OBIEE11g projects to be delivered in the future. If you’re interested, we’ve got more details on our “ExtremeBI in the Cloud” web page, or you can contact me via email - mark.rittman@rittmanmead.com - if you’d like to discuss it more,